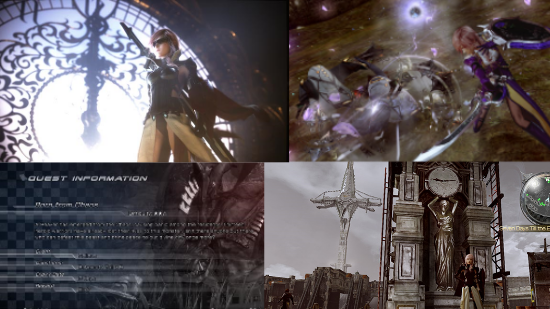 The third and final game in the Final Fantasy XIII trilogy sees Lightning awaken from a 500 year long crystal-enclosed slumber in order to save the souls of a dying world and lead them to salvation. In order for this to happen she takes up the role of saviour, given to her by the almighty God “Bhunivelze”. In exchange for guiding the souls of the dying world to a newly created one, Lightning is promised a reunion with her little sister, which now happens to be her only source of hope and motivation. During her time asleep Lightning has become devoid of all emotion, claiming she feels no hate, anger or remorse for the circumstances she finds herself in.

However, she does find herself filled with regret and guilt for her actions in the previous game and the consequences that followed. During her 500 years of absence a lot has changed in the world. Humans no longer age and no new life has been born due to the effects of the Chaos ravaging and destroying the world, although humanity is still susceptible to death from disease and injury. In thirteen days, Bhunivelze will awaken to create the new world, although the old world may not last until then. The only way to prolong the world's destruction before Bhunivelze's awakening is to collect enough souls and offer the “eradia” that comes along with them to the world tree. This will push back the day of destruction long enough for Lightning to complete her mission. In order to do this, Lightning is assisted by Hope. who talks to her telepathically from a secure location where time stands still.

While in the world, time is always constantly marching forward, with the game split into days that begin at 6am and end the following day at the same time. The game runs in real-time, with each minute of in-game time the equivalent of about three seconds of actual time. During this time the player has free rein to complete whichever objectives in the game they choose. The game is split into five main story quests, which are specific to each of the games areas with the game having one main quest situated in one of the games main areas, while one area has two, and over sixty side quests.

The quests in the game are also incredibly time specific. Certain quests cannot be undertaken unless a few conditions have been met - usually this involves completing other quests beforehand or finding the right character to speak to within a certain time frame. The game imposes strict limits on its quests, with certain areas proving to be inaccessible during certain times of the day. The quests all follow the standard fetch quest archetype - Lightning will talk to one character who needs an item or something from another, and once this character has been spoken to they'll reveal some other item or character that needs to be spoken to in order to advance the quest, but they'll be unavailable until later. Once they are available it then falls into the predictable routine of talking to everyone again in the right order until the quest is complete. Alongside this, there are instances where the player will have to revisit the same character and talk to them over several days until the quest is complete.

With this in mind it feels like the quests are all designed to use up as much of the game's available time as possible in order to justify its time mechanic being as prevalent as it is. While the side quests in the game rely rather heavily on adhering to the fetch quest stereotype, some of them have their own interesting little stories within the world and a few even fill in some of the gaps about the events between this game and the previous title, or do a bit of world and character building. Other than that, the main reason for completing the quests is the rewards they give. Unlike other Final Fantasy games, Lightning Returns does not give experience or rewards other than money and items from its battles. In order to improve Lightning's combat statistics quests must be completed, but performing these quests will also give other items like weapons, garbs, accessories and other such items as rewards.

The battle system in Lightning Returns works similarly to the Paradigm System from the previous games, but this time each role is more customisable and the game requires more direct input from the player. The player sets up schemata, where Lightning has access to three different costumes at once and can freely switch between them during a battle. Each costume loadout is known as a schema and comprises of a garb, weapon, shield, accessories and four different equipped moves. The moves in question correspond to each of the face buttons on the controller. Schemata can be fully customised to suit the player's needs, but each falls into specific roles due to the abilities the garbs and weapons have. Some schemata will be more tailored towards using magic-based attacks, while others focus upon physical attacks. Each garb has it's own set of stats and some even have abilities and moves attached to them.

Getting the right balance and finding the schemata setup that suits the player is perhaps the most interesting mechanic in the game. Along with this, each move in battle uses up points on an ATB gauge, and each schema has its own ATB gauge which is constantly refilling. The trick in battle is to attack in a way that will allow for constant attacks by properly timing them so they are most effective and switching between each schema at the right time. Like the previous Final Fantasy XIII games, the main objective in battle is to get the opponent into a staggered state as attacks against staggered enemies will do more damage. This can be done through various means, but the easiest and most reliable ways are to take advantage of enemy weaknesses and attack the enemy just before they are about to strike. This gives the game a bit of strategy in trying to discover the best ways to attack opponents in order to stagger them the quickest.

While Lightning Returns does have a rather fun battle system with some rather humorous and interesting quests, it does have a few flaws, the biggest being how the story is handled. With the main story split into five main quests, the game uses this an excuse to have Lightning interact with one of the characters from the previous games in the series at a time. While there are a few good interactions, in most cases it feels like many of the cast were forgotten about and added in at the last minute to give Lightning someone familiar to talk to other than Hope. While one of the story quests does properly tie into the games' ending, a few of them feel like they just occur and then everything moves on without any consequence. While the first Final Fantasy XIII game had a really confusing and meandering story with most of the finer details hidden within menus of text, the second simplified things slightly and at least felt more coherent.

Lightning Returns picks up a few bad habits from it's predecessors by not only having some of the finer points of the story and its world hidden in completely optional side quests but also within menus. While the main point of the game is that Lightning is now the saviour, the main story chooses to drive this point home repeatedly but forgets about other finer points in the story. Based on how the game plays and what is inferred to the player when they first start the game, the conclusion can be reached that the player is not meant to see everything all at once. Dialogue at the start tells the player it is not possible to save everyone and complete every side-quest in one playthrough.

The game also has a "new game+" mode that it recommends the player taking advantage of, not only to become stronger but to also see absolutely everything the game has to offer. The problem with this mode is that all completed quests reset, meaning the player will have to redo everything again along with remembering what they've chosen to miss out. The game counterbalances this by allowing the player to keep their stats and weapons, and also makes the rewards for completing quests different the second time around.

Lightning Returns: Final Fantasy XIII takes the right step forward with its gameplay, but it relies too heavily on mechanics built around completing random side quests with very strict time restraints. However, these side quests do at least offer some entertaining scenes, valuable information about the game and its characters and some very lucrative yet necessary rewards. The game does fall into bad habits with it's narrative, but when it does tie everything together it delivers a satisfying - if not completely surreal - finale to the “Lightning Saga” of Final Fantasy.

8
Lightning Returns to offer a fun but not quite grand finale to the Final Fantasy XIII trilogy.