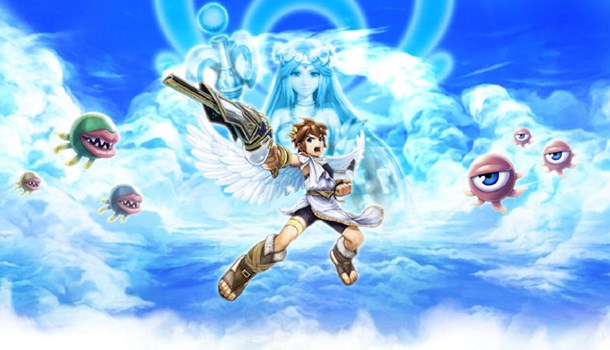 Kid Icarus was one of the main reasons I picked up a 3DS. Touted as a launch game and then continually delayed, it became a very frustrating period for fans of the angelic Pit. Was it worth the wait? Well, kinda...

Pit's reincarnation sees him take on two tiers of gameplay - aerial "into-the-screen" shooting battles, which finds Pit propelled through the air for five minute durations by his Goddess, Palutena, as he takes on Medusa's seemingly endless hordes.

Pit also sees action on the ground - when his flight time ends, he has to take the fight to the enemy in proper 3D - using a combination of both the stylus and the analogue pad, you have to guide Pit through numerous palaces and dungeons.

So that's the bare bones, but team Nintendo have really pulled out the stops here, and the layers heaped upon the two basic mechanics make for one of the deepest gameplay experiences you'll find on a handheld this year.

Firstly, there's the wagering system - you can increase the difficulty of a given level by betting hearts against your performance. Do well, and you'll be richly rewarded, but do poorly and you could lose everything, and make no mistake, hearts (the game's currency) are vital to upgrades and new weapons. This risk-reward mechanic is a great way to involve the player and encourage a tactical approach.

Once you have your new weapons, they can be combined. If you fancy yourself as a mad inventor, this is a great sub-system and worth spending time on. Finding a weapon that's "just right" for you is priceless. It also adds a ton of replay value as you try your new WMD against the enemies in the game.

Levels are littered with bonus items too. Keep your eyes peeled for treasure chests and other goodies - some items can only be found this way, and not purchased, so a keen eye is vital.

The story, too, is a treat. Things quickly become very complex as more Gods, Goddesses and even aliens get involved, and it's soon getting pretty crowded on screen. Happily both the script and the graphics are up to it.

Add to this an absorbing multi-player experience and even collectible cards (with more available via Club Nintendo) and the value for money is ovious here.

So, this all sounds great - solid story, collectible items, weapon-melding, great graphics and a fast pace, but there's just one element that seriously lets the game down, and that's the controls.

It seems odd saying this, but on any other system, this game would be a straight 10, no question. But the hardware simply isn't up to it. Trying to play what is effectively a score-attack game with a combination of a stylus and an analogue stick is a borderline disaster - it undermines two major factors in the game and, were it not so addictive, would utterly ruin it.

Due to the fast-paced nature of the gameplay, a stylus simply isn't fast or accurate enough to move you around the screen, particularly on the ground where you have to dash as well. Moving the character with the hand you need to hold the unit with is an exercise in RSI 101, and no amount of cute chatter and 8-bit references will quell your thirst to throw the unit out of the window. Attaching dash to a flick mechanic is woeful, and the resulting frustration and unfair death caused by the cack-handed design team at Nintendo HQ is maddening.

Secondly, unless you use the cradle it's nigh-on impossible to make use of the the 3D display, because it's very hard to hold the unit in the correct fashion for any length of time. And why the hell would you want to carry a cradle around to play a hand-held game anyway? Argh!

So in short, Kid Icarus is a great game greatly hampered by terrible controls. What's so frustrating is that the game could have been an absolute classic, but until the hardware and control scheme is radically updated, it remains a fun, if frustrating, return for Pit and his friends.

7
Hamstrung by Nintendo's host hardware, the game could be a triumph in a different environment.