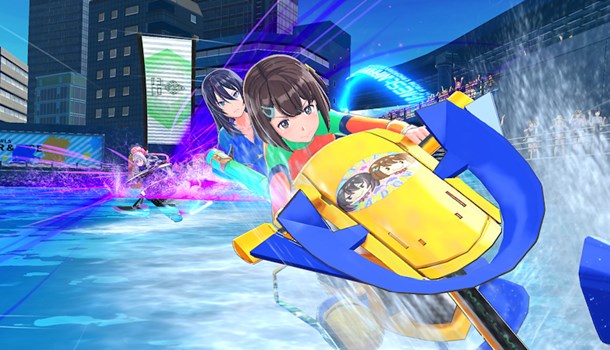 Kandagawa Jet Girls is set in a near-future Tokyo, where the hottest sport is jet ski racing through special waterway tracks built into the city. Teams of two Jetters compete against each other in order to win the Kandagawa cup. The game itself is a racing game in a very arcade style, akin to a cart racer. Think Mario Kart Double Dash, but replacing mushrooms and shells with water pistols. The characters comprise of various high-school aged anime girls that fall into various tropes. There is the genki girl who is always energetic, the tsundere type, the rich girl, big eater and even your token foreigners who are obsessed with Japanese culture. Each of these girls wear skimpy outfits and have your typical anime designs set to appeal to those who like cute busty girls. The game clearly knows the demographic.

This is evident with the various mini-games that involve close-ups of the girls bodies, while they engage in activities such as running on a treadmill, washing jet skis and mopping floors, with various advantageous camera angles and physics employed. As the player progresses through the story chapters of the main game, more costumes are unlocked for the girls to wear; a mix of swimsuits, racing suits, bikinis and high school uniforms of varying styles and colours. The main reason to play the mini games are to unlock enough credits to buy them from the shop. The games themselves only last a minute or two and are surprisingly easy, guaranteeing more than enough points from playing a few rounds to completely buy everything you need.

Each story chapter has a cut-scene before and after the race in order to set up each event, as we follow each team as they work to compete in the upcoming Kandagawa cup. Each team has their motivations for entering the race, ranging from very cliché set ups such as saving/restoring their failing clubs, or in once case wanting to connect with their mother who herself used to compete. The bog-standard sports-story setup is made fun due to the lively character interactions and jokes, and variety is achieved by unlocking more teams so that you can learn more about them as you race.

Races usually take place between two named teams and six nondescript AI competitors. Each race has three bonus objectives that, when all are completed, unlock new clothing accessory items. All of them contain the finish in first place objective but the other two can include things like reach a top speed of 90km/h for 5 seconds, not touching the walls or using weapons a set number of times. The weapon objectives in particular were really tricky to do; not for how difficult they are to use but because races were far too easy. Every race I engaged in, I would boost straight into first place and maintain my lead for the entire duration. This made the racing feel more akin to a time trial, and in order to use a weapon you need a target. Ultimately this makes the game a bit dull, as I was mainly rushing ahead and keeping my distance with no threat at all of losing.

The game itself is a pretty standard racer with ramps, a boost button that is tied into a gauge that will let the player use a special move when full, and you can drift too. The player has access to a water pistol that can shoot forward or back along with random weapons littered on the course. The shooting backwards mechanic puts the players into a "shooting view" while the computer takes over driving. I found myself barely using this as no player was ever directly behind me long enough to make full use of the feature.

Other than the story mode there are time attacks and standalone races, both of which are single player. There is no local co-op (in a racing game!) There is an online multiplayer aspect, but given this is a pre-release review copy, nobody was around to actually compete with.

In all, the game has it's share of flaws, but I didn't mind it as much as I thought I might. Sure, it's repetitive, quite easy and laden with fanservice, but there are times you just need an easy game like this to have fun with and not take too seriously. Its a nice looking and simple distraction for those who just want a fun simple racing game with anime girls that they can dress up with prizes. It may have about as much depth as you'd expect from a multimedia, corporately designed merchandise monster, but it has plenty of charm for those looking for an easy ride.