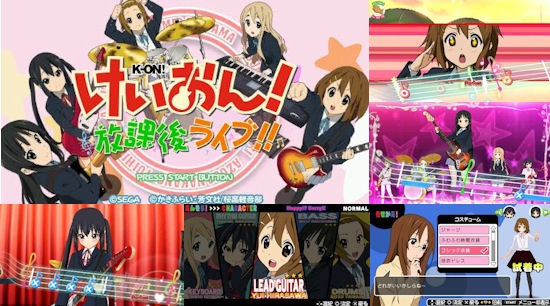 The next twelve months look set to usher in the era of K-ON for anime fans in the UK - after proving itself to be a sensation in its native Japan, we'll be seeing the first translated volume of Kakifly's original manga appearing on our shores courtesy of Yen Press shortly, while Manga Entertainment holds the rights to the first season of Kyoto Animation's anime adaptation.  With the series proving to be both a musical and merchandising powerhouse, it was only going to be a matter of time before someone stepped up with a rhythm game sporting the K-ON name, and so it goes that PlayStation Portable owners now have the opportunity to step into the shoes of the light music club's quintet and try their hand at recreating their light music club shenanigans - albeit in Japanese, with no news of a western translation as of yet.

Given that it's SEGA handling this title, it probably won't surprise you too much to hear that, at its heart, Houkago Live is effectively Project DIVA given an extensive makeover - not that this is a bad thing, mind you.  The game contains nineteen songs that make up virtually all of the musical output from the anime's first season, sporting a number of tunes from the series itself as well as the tracks from all five lead girl's character singles which might be new to you unless you're a K-ON die-hard (like this reviewer, for his sins).  While nineteen songs doesn't sound like a huge amount of material to work through, bear in mind that each song can be played as each of the five characters in the band, and once you factor in the inclusion of both "normal" and "hard" difficulty modes there's plenty to keep you occupied if you can stomach the idea of playing through these saccharine pop songs at least ten times to claim 100% completion of the game.

Thankfully, Houkago Live is more than a hastily glued-together Project DIVA clone - some care has clearly gone into making the most out of the different instruments and individuals within the game, whether it's the left-handed nature of playing as bassist Mio (employing the D-pad rather than the other buttons heavily) or the differences between tackling songs as lead guitarist Yui or rhythm guitarist Azusa.  The entire system for prompting the player what buttons to hit and when is also very different to Project DIVA, employing a stave from musical notation and placing notes upon it, with a line moving across said stave to keep you up to speed with what to hit and when.  This actually allows for a little more variation than Project DIVA, requiring you to manage combinations of button presses and holding certain notes to make for a deceptively simple game to begin with that becomes significantly more complicated game when you start hitting the higher difficulty levels.

Of course, no K-ON game would be complete without weaving cake and sweets into its narrative somehow, and these foodstuffs are inserted into the game as "power-ups" which you can win by completing songs, choose from the choices available before starting a round and deploy during a song via the shoulder buttons.  The effect of these goodies vary from making your life easier to far more difficult by adding notes, masking the button presses required or giving the character diabetes (okay, I made that last one up), but they all boast the chance to grab bonus points if you can navigate them successfully and they add a little tactical thought to proceedings.

Away from the mainstay of the game there's plenty for the die-hard fans to enjoy - occasional cut scenes pop-up between songs featuring cute, chibi-fied versions of all the shows series one characters (Nodoka and Sawako included) as they engage in chit-chat, usually as a pre-amble to describing new features that you've just unlocked.  Of course, all of this dialogue is in Japanese but much of it is so typical and/or mundane you can probably pick up the gist of it easily enough.  Making good progress with decent scores through the game will also unlock additional backgrounds and clothing to use in-game, such as casual clothes for the girls and, of course, cat ears.  You can't have Azusa wandering around without cat ears, right?  If that isn't enough for you, the game also allows you to unlock an in-game alarm clock (I have no idea why you'd want this), as well as the ability to create and record your own "music videos" with a surprising amount of control over scenarios, camera focus and so on - they aren't pivotal to the game, but they certainly add some fun extras to an already polished product.

It's this attention to detail that makes Houkago Live a must-buy import for K-ON fans with a PSP - it doesn't take long to get to grips with the Japanese menus (and you'll find English instructions online easily enough), and once you delve into the game itself it's incredibly fun.  The music is great, the difficulty level tends towards being slightly too easy but is just about right overall (and it's worth failing the odd level just to see and hear your favourite character despairing at her poor performance), and the game as a whole nails on pretty much everything that is enjoyable about the series without sacrificing anything in the gameplay stakes.  Its musical range isn't as diverse as Project DIVA's for obvious reasons, but aside from that I dare say that Houkago Live is at least equal to, if not better, than its Vocaloid stable-mate.  Make yourself a big mug of tea, stuff your face with cake, and indulge yourself in trying your hand at "Don't Say Lazy" - you'll have a blast.