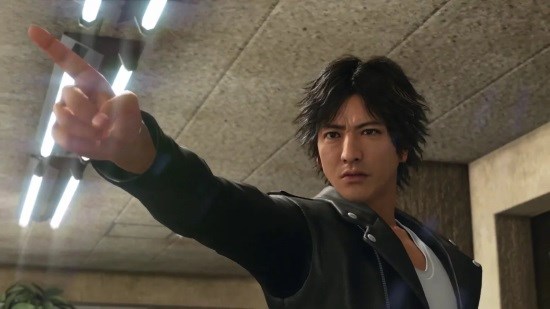 It must be impossible to get bicycle insurance in Kamurocho. I mean you’re just going about your day, cycle in to work and then within seconds of putting the stand down someone picked up your bike and used it to smash someone over the head. Even if the frame weren’t bent to hell those bloodstains are not going to be fun to wash off! This is my main come away after a 30-odd hour playthrough of Judgement, the latest game from the studio behind the Yakuza franchise and the first (bar the Japan-only Yakuza online) to not feature the grim mug of the Dragon of Dojima.

Instead of Kiryu and his tales of underworld Yakuza intrigue, Judgement introduces us to Takayuki Yagami, a lawyer-turned-detective….who tells us a tale of underworld Yakuza intrigue. After the captain of his old Yakuza family is arrested for murder, Yagami is ‘persuaded’ to help out with the investigation to prove him innocent. This puts him on the path to discover a much deadlier mystery involving old friends, a deadly assassin and a government conspiracy.

The origins of Judgement seem pretty clear from playing the game itself as it’s very clearly been built on the bones of Yakuza 6 and doesn’t really use any new areas other than enclosed spaces. In fact it’s the first game in the Yakuza world for quite a while to not visit any other hub locations other than Kamurocho itself. To some extent this does make the game world seem a little small though at the same time the team is clearly starting to get to grips with the excellent engine that’s been powering the games since Yakuza 6 and Kamurocho looks amazing and feels more alive than ever which more than helps with the issue.

Gameplay-wise this is very much what you’d expect from a Yakuza game – bone-crunchingly visceral combat, weird side story missions and a long twisty plot with enough story to fill a TV series. Newly added for this instalment are a few new mini-games to compliment Yagami’s status as a detective though sadly none of them really work all that well. The lock-picking works great but very rarely comes up (you’d have expected it to at least feature more in the over-world to let you get into closed off buildings or open discoverable chests etc). The ‘investigation’ (a first person view that allows you to look around and highlight clues...and cats) doesn’t really add all that much as it’s impossible to miss anything plot-relevant nor do the various moments where you have to present evidence for a case. Whilst the tailing and chasing are fun to start with they quickly become more and more boring as rather than making the activities themselves more challenging they instead just start taking longer to reach he end of. The tailing in particular suffers from this not least of which because of the fact that people who have never met you or seen you before can still somehow magically tell that you’re following them and spot you. The less said about the insanely boring drone races the better.

There’s a sense when playing Judgement that something is missing (though people who are picking this game up with no prior experience of the Yakuza games would probably not have this problem) and it took me a while to figure out what it was – the game is too...polite. Whilst there are still some wacky moments and the setting means that there are still some dodgier elements around it’s all just very safe. I’ve mentioned before that the Yakuza games need to decide how they’re going to deal with sex in-game either by removing it entirely or going all-in and with Judgement they’ve very much gone the former route and it just feels lacking. It’s not just the loss of the strangely PG videos of porn stars who never strip beyond their underwear that’s gone – it’s everything. All of the women that Yagami can woo end their arcs with a hug and an agreement to date, the hostess clubs are all but gone and even the posters and buskers all seem very polite suddenly. It’s like going to a party where you know it had been insanely awesome before you got there and now everyone is waiting for you to leave to kick it off again. Even the side missions never quite reach the levels of insanity that they’ve managed before plus they’re all much more obviously walled off until you’ve done enough encounters with the towns inhabitants to raise your friendship/notoriety level high enough to unlock the next ones.

On the other hand the friendships, whilst annoying and over-long to complete, do add a bit more life to the town though it would have been nice to have them do a bit more than just wander around the town. The game looks spectacularly good and the cast are a genuinely lovable/hatable bunch. Whilst the combat isn’t quite on par with previous games it’s still very satisfying and it does feature a key improvement in that being hit by enemies no longer depletes you’re EX gauge meaning that in boss fights you can actually use the high powered moves. I’ll also give you here the secret to beating almost every encounter in the game – bicycles. Bicycles are your best friend in Judgement as there are hundreds of them everywhere, they can deal 6 hits, knock over multiple enemies and by then time you’ve done hit number 5 your EX gauge is normally full enough that you can brain someone to finish them off.

Overall I am kind of down on Judgement but frankly that’s because the game is so like a Yakuza game that comparison is inevitable (one in fact wonders whether this was originally developed as some kind of DLC 2nd campaign for Yakuza 6). At the end though, was it as good as the other Yakuza games? No. Did I have fun with it? Yes, yes I did. It’s certainly good enough that I stuck through to the end even though the drive to go back and complete all the side quests wasn’t there. If they do another one of these then hopefully they can fix the issues and broaden it out into a more separated and unique experience. Otherwise, role on Yakuza 7 and bring back the sleaze!

7
Newcomers will want to add a couple of points but Yakuza veterans may be underwhelmed.