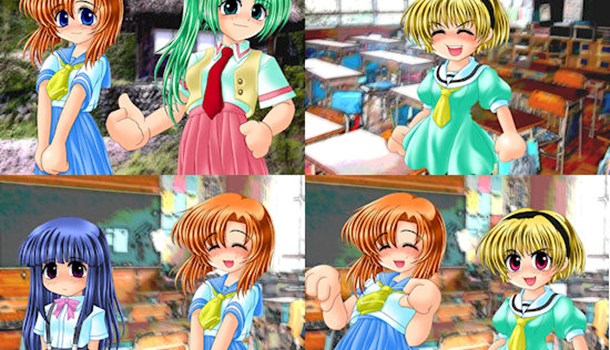 Whether you've ever played one or not, doubtless most of you will be familiar with the concept of the Japanese visual novel - Largely text and still image-based games which occasionally allow you to make decisions which affect your progress through an otherwise dialogue and description heavy environment, usually with a view towards dating and... err, "getting to know", one or more of a series of cute girls.

If that's the kind of visual novel formula you're familiar with, then you can throw all of those concepts out of the window for MangaGamer's recent English translation release of the first four chapters of Higurashi: When They Cry (originally known as Higurashi no Naku Koro ni in Japan) on the PC.  Yes, you are a solitary male surrounded by girls, but that's pretty much where the similarities end.

Higurashi's story introduces you as Keiichi Maebara, a teenaged boy whose family have recently moved to the rural Japanese backwater that is Hinamizawa village towards the mid-1980s.  In these new and unfamiliar surroundings, Keiichi soon finds himself making a number of new friends at his rather ramshackle mixed-age new school, and thus we are soon introduced to these girls and their various foibles and personalities.

As time goes on however, Keiichi's quiet but happy life with his friends is disturbed slightly as he hears stories about a gruesome murder which took place several years previously but which nobody else in the village seems willing to acknowledge, let alone talk about.  While this is perhaps understandable, Keiichi learns about yet more murders and disappearances centred around the village's annual festival and a so-called "curse" brought about by their local god.  It's at this point that the game is turned on its head, as friends become enemies, everybody becomes a suspect as the mysterious goings-on increase, and Keiichi's life takes some decidedly sinister turns.

In reality, this release of Higurashi: When They Cry actually consists of four different story arcs, all but one centred on Keiichi (the fourth "chapter" is set prior to the events of the first three) but taking different twists and turns to tell a different story each time.  Each of these four arcs is steeped in mysteries which (conveniently, you could argue) aren't explained and resolved in full until the second set of four story arcs known as Higurashi no Naku Koro ni Kai and due to be released later by MangaGamer.  Thus, rather than taking you through a particular story from beginning to end to explain the goings-on from all possible angles, each of these stories leaves the player hanging - Indeed, this is the entire point of Higurashi, to give you a certain amount of information before leaving you to deduce the reasoning behind any strange goings-on for yourself.

This story-telling mechanic also means that the concept of choice is done away with entirely, making Higurashi a "game" in a far more abstract sense of the word.  There are no paths to choose or decisions to make, you're literally powerless to do anything except click and read as the plot unfolds from beginning to end, leaving it to your imagination and a series of tips served up at the end of each chapter to try and deduce what's going on.

This anathema to interactivity is certainly going to be an acquired taste for many (especially given the fact that each of the four "chapters" in-game aren't particularly short), which isn't helped by the fact that the illustrations and character designs that accompany the game as it unfolds are basic in the extreme - Not surprising given Higurashi's gestation as a simple doujin game created for fun before it became a runaway success, but it still remains jarring compared to the quality illustrations and backdrops which make up many Japanese visual novels these days.  Higurashi tries to make up for this by angling itself as a "sound novel", generating atmosphere via music and sound effects, but even this aspect of the game is really quite limited in all honesty.  This leaves Higurashi to live or die on the strength of its stories, and even here things are a little hit and miss - While I'll be the first to admit that the second half of the game's story arcs are actually quite gripping in their own way, invoking a few "just one more chapter" moments from me, it takes far too long to actually built up the scenario and reach that point in time, with the more light-hearted club activities featuring Keiichi and the girls often dragging on needlessly when you just want to get to the real meat of the chapter.

These various flaws with Higurashi leave it positioned more as a curio than a genuinely, highly enjoyable visual novel - Kudos should certainly go to MangaGamer for translating the title for a western audience (something they've pulled off reasonably well despite a number of spelling, grammar and translation errors, and the removal of some parts of the music score due to copyright issues), but the concept of a visual novel without pretty illustrations or any "normal" interactivity will likely only appeal to a niche of hardcore fans.  If you're a keen lover of stories which descend into a spiral of violence and insanity, then you could find yourself loving the key tenets of Higurashi's modus operandi (and it does prove to be oddly enjoyable), but for the average gamer it's hard to see many persevering with its particular take on the visual novel genre.

Higurashi: When They Cry is currently available as a digital download from MangaGamer

6
It's great to see a title so loved in Japan get an official English translation, but the game itself will only appeal to hardcore fans.
LATEST REVIEWS
13 Sentinels: Aegis Rim (Switch)