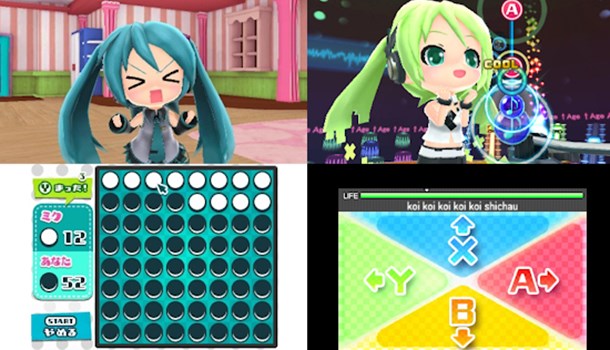 Hatsune Miku has moved to yet another console, this time she is winning hearts and fingertips on Nintendo’s 3DS in Hatsune Miku Project Mirai Deluxe. So how does Miku and her Vocaloid friends perform on this console when compared to their predecessors on the PlayStation platforms?

Let’s start at the beginning. The Project Diva games began as a one-handed button smashing affair on the PlayStation Portable (PSP). The first game setup the franchise, and actually gave us many of the songs which we hold dear today (I still hear Hato in my nightmares…). The gameplay was basic, difficult, but very fun. When Project Diva 2 came out, many of the foibles with the gameplay were fixed (two handed play, woohoo), but with it came more difficult moves as well as a more complex system for interacting with the Vocaloids, with the Diva Rooms and the ability to modify the dance moves being major selling points.
The game finally came to the English language market with the move to the PlayStation Vita (PSV) and the PS3 in Project Diva F, but with this move came some odd design decisions. The touch controls added an un-necessary complication to the gameplay, requiring a hybrid system with touch controls and button pressing. This is a decision most rhythm games don’t make, keeping their touch and button playstyles separate. Project Diva F2 gave us improvements, and yet more bloody complications, and unfortunately a poorer song selection, choosing mostly older tracks from the earlier games. Thankfully, there was DLC to prop up this otherwise weak song selection.

When the new studio brought the series of Project Mirai games to the 3DS, someone made the smart move of actually providing the player with two types of game play. First, a dedicated touch style, with the lower touchscreen being a sort of drum kit allowing the beats to be played with colour coded drums. Think Taiko no Tatsujin, except much easier. The second style reverted back to the good old button-only deal which the PSP gave us with Project Diva 2, and actually, other than the updates in the interface and the button patterns on screen, which now follow a linear track rather than just popping out of nowhere like the PlayStation games, this game feels very similar to the PSP games of old. This is a good thing.

Music-wise, I am honestly of the opinion that the song selection is as good as Project Diva F, much better than F2 (even with the DLC). The songs are well chosen, offering a good selection of styles and speeds, from the slower love songs, to some well-loved classics and Vocaloid hits. I will save the direct song comparisons for the Wikipedia pages which have been lovingly compiled by the truly obsessive.

One of the changes to the game, which is borne from the different console format and processor limitations is the simplification of the characters. The whole Mikudayo meme came from the character designs for Project Mirai, and they are cute, if a bit unique when compared to the designs used for Project Diva. The designs are all super deformed, whereas previously they were actually normally proportioned. This isn’t a bad thing, but admittedly, I prefer Megarine Luka to look her normal self, rather than Lukadayo.

Project Mirai doesn’t stray far from its predecessors, following the same formulae to deliver the combination of the rhythm game fun, the customisation of songs, dancing patterns and the interaction with the characters. This time the game is situated in “Mirai Town”, and when you have selected your Vocaloid you navigate this town to access the various areas of the game. The most used sections for myself are the Shop, where I hunt for the cat ears to adorn my beloved Vocaloids with, the room, where I can shower my chosen Vocaloid with gifts and lose to her at Reversi, over and over again, and finally, the rhythm game, where I win the coins to allow me to continue losing at Reversi…

I did have a play with the dancing editor, and I have to say I wasn’t actually impressed. Basically, the editor allows you to customise the dance moves for any of the in-game songs, but it has some flaws in that you actually have little or no idea what any of the dancing icons do, and the tutorials aren’t that good. I had to rely on some fan forums to be able to make Luka perform the super-deformed pelvic thrust that I wanted her to do. (Don’t judge me!) I would have liked a custom song editor like you have on Project Diva F2, but, alas it wasn’t meant to be.

As for DLC, I honestly couldn’t find anything for the game so far. Whereas Project Diva F2 had masses of DLC, covering songs, costumes and other paraphernalia, I couldn’t find even a 3DS theme for Project Mirai. I hope this changes.

From the actual playing side, the game is more fun than the PlayStation versions, but with a vicious learning curve. For a start, Project Mirai has three difficulty levels, Project Diva has four. Easy on Mirai is the equivalent of Normal on Diva, bear this in mind when you try the hard songs. Woah. Out of the two modes, touch-only and button-only, touch is by far the easiest due to the note patterns. I found it very hard to adjust to the 3DS button patterns being a PlayStation gamer, but after a few hours of gameplay, my mind finally got used to ABYX and the arrows. Thankfully, both pads can be used, but there are one pad only moves, holds and combo presses, just to make things a bit trickier.

Like the Diva games, Mirai has powerups to make songs easier, but these are massively more limited and less frequent almost to the point where they don’t matter. The costumes are cute, but unfortunately, still devoid of cat ears.

Achievements are unfortunately another item where the PlayStation games have an advantage. Mirai has stamps, but these can’t actually be shared. I like my achievements. Finally, the game also allows you to view the videos and the music via a built in player. This has been a standard feature in all of the previous games, and I am glad it was retained in the 3DS version.

All in all, Project Mirai DX is a great little addition to the Hatsune Miku game franchise. Whilst the developers have provided some improvements over its predecessors, mainly in the rhythm gameplay, the other features missing in the game make this perhaps the poorer cousin of Project Diva. However, those features don’t make the game less fun and one bonus it has is that Project Mirai is very accessible, and the redesigned characters are just so cute, it’s hard not to love them. Either way, Project Mirai DX has ensured that at the moment, I carry both my 3DS, and my PlayStation Vita in my bag.

8
A fun addition to the Hatsune Miku franchise