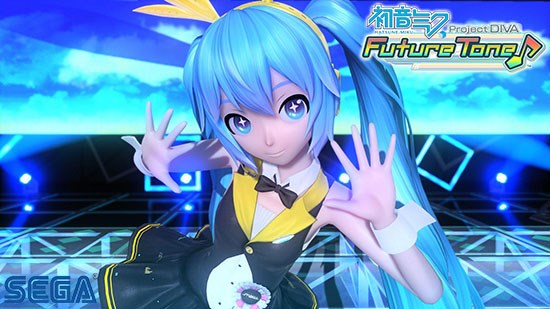 Well, this is quite the turn up for the books. After mentioning in our Project Diva X review that Sega should be releasing Future Tone, they've only gone and done it! And I'm pleased to say that pretty much every criticism that could be leveled towards Project Diva X is addressed and fixed in Future Tone!

The first and most obvious difference to my mind between the two titles is the sheer number of songs available. At a full catalogue list of 224 songs, this is probably one of the largest console rhythm games by song count that I've ever encountered. Most of the songs from the Project Diva series are featured in this game.

The other difference, notable by it's absence, is that the visual novel/unlock aspect of Diva X is not in this version in any form, which is definitely a good thing. Even if you are a fan of visual novels that was a grind, from the paltry voice work down to the uninteresting story and dialogue. This game retains the character customisation, but ditches the fluff from the other game.

The user interface is clean and very intelligable. Songs are very quickly searchable and easy to find. This is really how all rhythm games should be styling their menus.

Future Tone is really the home console release of the arcade version of Project Diva, and whilst not including all the licensed tracks and exclusives of the arcade version, it is really all here in spirit. The most notable gameplay change is the addition of the swipe arrow. This is the touch sensitive bar in the arcade which can be emulated through the touchpad of the dual shock 4 controller. I found this to be much more satisfying than using the alternative analog sticks or shoulder buttons, and truer to the arcade experience. To this end, the Project Diva X Controller might be a worthwhile purchase to the truly dedicated, though it must be pointed out that there is no controller made specifically for Future Tone with its rather huge swipe bar, which is somewhat of a shame. Either way, the only way to aquire one of these controllers is through an import site.

Overall, Future Tone shows that the Hatsune Miku franchise and the Project Diva series of games shows no signs of slowing down, and the fact that this game has had such a solid localisation job gives me great hope for the future of this series, but for now Future Tone is the definitive Project Diva game, and is a must buy for all rhythm game and Vocaloid fans.

Hatsune Miku:Project Diva Future Tone can be found exclusively in the Playstation Store. Pricing starts at Free for the base game with a demo song, up to £44.99 for the full game with both song packs.

10
The best Project Diva outing so far, the best value for money and the most complete. The standard by which other rhythm games will be judged!?