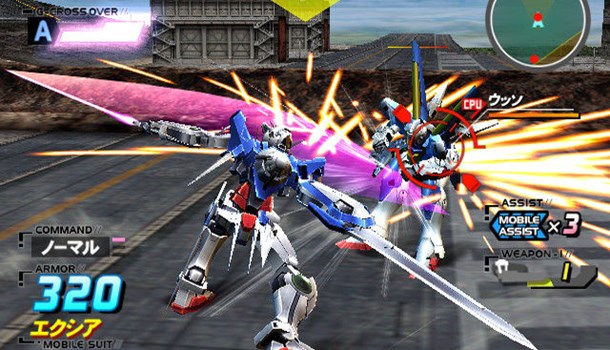 There have been a great many Gundam games on the PSP, ranging from arcade style arena battles (Gundam SEED: Rengou vs ZAFT) to the Battle Tactics series (up to the fourth of those now I believe) and even one SD outing. Sadly, because of the heavy Japanese text, only SEED was really accessible to Western gamers, and scored an awesome 10/10 - the balance and replayability really made it shine, and I even managed to get a 5 hour marathon in due to being on a train stuck in the horrific floods of last year. My portable friend paid for itself in spades that day.

The latest release is a port of the arcade game of the same name, and in place of the (very varied) SEED mecha, we have a lovely assortment of Gundam's through the ages. All in there are 34 mechs, with 4 more, PSP exclusive, unlockable death machines made available one at a time as you beat the game the first 4 times.

Due to the sheer volume of Gundam series, you're never going to shoehorn everyone's favourite mechs into the game, but what's here is a good, varied collection. Each show represented gets a mech or two, starting with the original series right up to 00. The easiest mechs to play with are the Wing Gundam (huge beam weapon as standard), Freedom Gundam (awesome special) and surprisingly the original RX-78, which has a bazooka and a huge ball & chain. Very impressive stuff.

It won't be long before you start experimenting with the others, and they all have their charms. The controls are different to SEED: Rengou vs ZAFT, and that takes a little getting used to, but once you've got the controls mastered (which is easy thanks to an English instruction sheet nestled inside the manual!) you're good to go. It seems that Namco Bandai have a good idea about which of their games get imported, and support them accordingly.

The pace isn't quite as fast as Rengou vs ZAFT, but the game play doesn't suffer for it. Character models are detailed for such a small screen, and while the surroundings aren't that detailed, it's not the landscape you'll be playing the game for, it's the action. The music is all taken from the shows featured in the game, and there are a few standout tracks, amongst which would be Communication, the instantly recognisable theme from Wing. Each stage is themed to a show (sticking with Wing, you fight in the school grounds, for SEED it's a Lacus concert) and subsequently you have some pretty fantastic nostalgia trips while playing.

When the much-mentioned Rengou vs ZAFT arrived, it was unique to the system. Gundam vs Gundam has to suffer competition from it's older brother and the recently released (and reviewed) Macross Ace Frontier, which had the benefits of levelling up, multiple mission types, stunning graphics, a huge soundtrack, the Macross missile barrage and 3 modes of fighter. Subsequently Gundam vs Gundam feels a bit sluggish and light in comparison, and were it not for this the game would score higher.

As a mech brawler in its own right, it's great - I've whiled away many an hour getting my skills just right, and even though it boils down to shoot, evade, wait for enemy to land, shoot again, it's wrapped up so nicely you really don't mind.

The range of available mecha makes this a good sequel to anyone with the SEED game, but I'd go for Macross over this if I had to make the crucial decision.