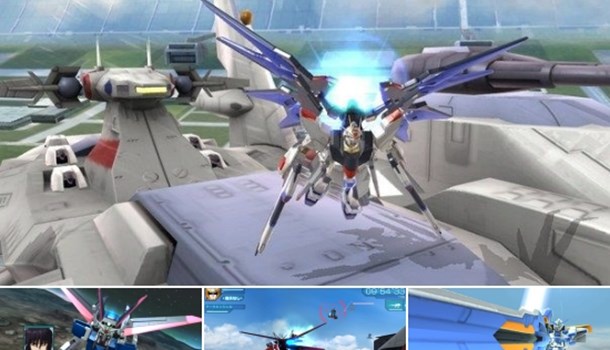 I NEVER DREAMED WE'D MEET AGAIN LIKE THIS - ATHRUN ZALA

Handheld Gundam games go next-gen with Artdink's first Vita Gundam game. Following their "Battle" series template, you pick a side (ZAFT or Federation) and begin as a grunt undertaking missions to unlock more suits which you can customise to your liking.

This particular game is set entirely in the Gundam SEED universe, much like the first Gundam game I ever played on PSP, Gundam SEED: Omni vs ZAFT, which scored a rare 10/10. It was easy enough to follow, had great graphics and was highly addictive.

So, you might ask, is the Vita version just a glossy remake?

TRYING TO PILOT THAT MOBILE SUIT? YOU'RE IN WAY OVER YOUR HEAD, NATURAL
- MIGUEL AIMAN

Well, it certainly looks crisp. While the suits may not be overly detailed, they are sharp, solid and well animated, which suits the overall aesthetic down to the ground. The backgrounds are nice enough but hardly breathtaking, but your eye will be on the action, so this isn't such a bad thing.

The interface is clean too, and since touchscreen is seemingly mandatory on Vita, you get some next gen controls too. Weapons are selected by touching them on screen, which will either be quick or annoying depending on how comfortable you are with touchscreen controls. You can also command your AI partner from a menu that expands on the top left of the screen - you can have them defend, follow, attack or retreat. To be honest I didn't really use my partner for anything but fodder, but certain missions do require a bit of planning, so keep an eye on them!

The last "upgrade" over the original game is the sheer amount of suits on offer. Not only are every unit from the core SEED/Destiny stable included, but also the splinter shows, Stargazer and Astray Blue/Red. A staggering 116 suits are there for you to unlock, so you're going to be kept very busy if you want a full garage.

I AM NOT DEFINED BY MY ABILITIES ALONE! - KIRA YAMATO

The game usually boils down to "kill everything in sight", with emphasis on defence of a base unit (such as the Archangel battleship), clearing a battlefield or targeting a specific base/unit. You are a solider, this is your lot in life.

Your ammo in this game is limited, but most battlefields contain orange boxes that replenish your stocks. They'll show up on the maps so keep them in mind when the battles get hairy... and they will get very, very hairy indeed.

This is a hard game. Even a seasoned player like myself found that some levels were akin to attacking a battalion of tanks with a teabag, and in these cases your lovely, shiny Vita may be at risk of domestic abuse. You have two choices on these missions - either plan very, very strategically, or level up on other missions. Grinding is always a chore, so my advice is to examine the battlefield, prioritise your targets and, if you are outgunned, find the fastest way to end the battle. In some cases, taking out the mothership will cause all units to retreat. However, be aware that, for the first time in a Gundam game such as this, the motherships can and will defend themselves. You'll have some major firepower levelled at you by some trigger-happy bitches just itching to unleash laser-guided fury at your metal ass.

IF IT'S MY PLACE TO BE SHOT DOWN BY YOU, THIS PLACE SEEMED APPROPRIATE...
- RAU LE CRUESET

So it looks good, plays a mean, tactical game and has a host of hardware to play with. Any catches?

Well, it's unclear at this point as to whether or not you can actually unlock all the suits available on a single save file. Forums suggest that in order to unlock suits for both factions, you have to create multiple save files. I can't confirm that yet, but if true it's a very annoying decision that makes the Japanese menus that bit trickier to negotiate. It also makes the game messy, and my compulsive need for order is both offended and distraught at having to try and keep track of everything in such a slipshod manner.

The menus are quite involved, but translations do exist online to remedy this. However, to my knowledge there isn't yet a complete FAQ/Translation/Guide, with the best to date available at GameFAQ's (link at the foot of the review). This isn't a major problem, but it does make the game less immediate than the more arcade-style Gundam Vs games.

Lastly, combat can get repetitive. Regardless of how many units are on offer, you're still effectively dancing around targets and firing. Yes, this has more strategy than most Gundam games, and certainly the most advanced AI, but it's still a case of point, shoot, dodge. Personally I love the simplicity of it, but if you're after varied campaigns, you won't find them here.

So there are more suits, better graphics, solid campaigns and more strategy than any Gundam Battle game before it, so what's the verdict? Overall it's a fun, challenging title that should keep you occupied for some time to come. Unlocking all the suits will certainly take a lot of time, but the generous trophy system, variety of mechs/pilots and fast-paced gameplay should make this worthy of a punt, even for the import novice.

The FAQ for this game is available at GameFAQ's here.

8
Sharp, meaty and hard as nails, this is a fitting tribute to one of the best mech series of recent years.