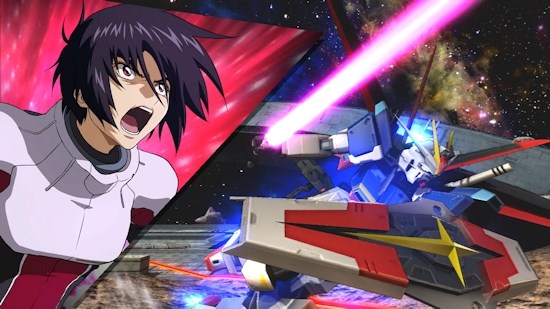 It's no secret to anyone who really knows me, but the Gundam Vs series really floats my boat. The idea of taking generations of popular Gundam mecha into the arena and issuing a legendary beat-down just gets my engines revving, and if you haven't yet experienced the arcade phenomenon, there's never been a better time than now.

Following on from the arcade release of the same name, Gundam Vs is no stranger to the Sony family - the PSP has been on the receiving end of a plethora of top notch games (see here and here). Finally the series has landed in HD on the PS3, and bloody hell, it's amazing.

The basic mechanics pit teams of 2 against each other in an arena. The only requirement is that you defeat every enemy that lands in the killzone, making the game very accessible for non-Japanese speakers.

You can select a mech from sixty Gundam units (sixty-seven if you count DLC, one of which is free) which gives the game plenty of longevity. Every unit has special skills and a style to learn, from the close quarter G Gundam units through to heavy range fighters like SEED Destiny's Lunamaria Hawke in her ZGMF-1000/A1 Gunner ZAKU Warrior. You have a lot to learn before you can master the game...

On top of the variety offered by the combatants, there's also a whole host of combat mechanics to learn - you can move freely, but you also have limited thrust for flight, dodging and charging. Because thrust is limited (and must recharge) you have to plan your attacks carefully. You can cancel thrust moves to feint opponents, strafe and dart across the screen, but run out of puff while the enemy has you in their sights and you're an easy target.

Subsequently the game plays like a game of tag, with every fighter attempting to outmaneuver the other in order to tag them, either with ranged attacks or melee weapons. Many units can block, while others have close range defensive maneuvers.

Additionally, you can call in temporary support fighters, or, when the chips are down, enter an enhanced berserker mode which allows you to inflict massive damage on the enemy.

The mechanics of the game have been radically overhauled from the previous incarnations, making it far more tactical than it has ever been before; this is no bad thing as it makes each match that little bit more skillful, and where attack-spamming might have led to victory before, it will only lead to a swift and crushing defeat now.

Visually the game is very smooth - it runs at a solid sixty frames per second, and while the mechs aren't hugely detailed, they do look quite resplendent striding across the screen like the metal Goliaths they are. The controls are very responsive, the battlefields detailed enough to create an atmosphere, and the soundtrack plays like a "best of" Gundam through the generations.

The ability to play two player split screen makes this a hoot at parties, and with online play also available (assuming you can make it through the Japanese menus) you have enough to keep you playing for some time.

The game also comes with a mission mode which uses the various series as a base to put you through your paces while you level up your mobile suit. This can become highly addictive and adds another layer of longevity onto an already pretty shiny package.

With four exclusive PS3 Gundam units, seven DLC mechs with the possibility of more to come and the ability to play your own music from the console's hard drive as you play, this really is the ultimate Gundam game. Expect a sequel in about six months time with a bigger roster and more refined mechanics...

10
Epic in scope and beautiful in execution, this is a must have for any Gundam fan with a PS3.