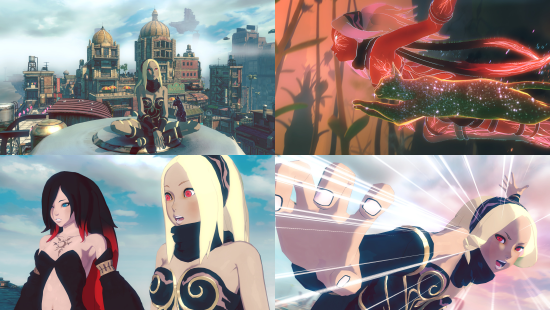 Gravity Rush was one of the original intellectual properties which launched the grand experiment and successor to the irreplaceable Playstation Portable (PSP), the Playstation Vita, back in 2012. Gravity Rush, also known as Gravity Daze over in Asia, provided a unique gameplay and immersed you into the world of Heskeville with Kat, an amnesiac young girl, whose black cat Dusty, allows her to manipulate gravity. With these powers, Kat was able to help save Heskeville from a myriad of evils including strange monsters called Nevi, a thief called Alias, and the murderous megalomaniac intentions of a mad Mayor. While achieving these great feats, Kat also helped the towns people of Heskeville, helping them find lost animals, fight the raging gravity storms, fixing broken relationships and, well just being cute and awesome.

From her sewer pipe, complete with bed, chair and light furnishings, Kat truly became the Gravity Queen and was known and loved by all and with her partner, Raven, furnished with similar abilities, they protected Heskeville from the dangers lurking in the great gravity ocean.

That was, until a rogue gravity storm swept them away. This incident was covered in a short animated OVA which was made available on various streaming websites and the Playstation Network to celebrate the release of the remastered and upscaled Gravity Rush for the Playstation 4, and as a taster for the release of the sequel, the aptly named Gravity Rush 2 (insert sub title here). In essence, Kat, Raven and Syd investigate gravitational disturbances in a region known as Neu Hiralion and find themselves under attack from unknown foes. Suddenly, a storm strikes and the three of them find themselves split up.

Gravity Rush 2 is a direct continuation and Kat finds herself in a strange new place, again with little or no memory of who she is, where she came from, or of the events in Heskeville. Thankfully for us, this temporary lapse is just that, temporary, and she rediscovers her mojo, and Dusty after a brief exploration around Jirga Para Lhao and the nomadic mining village of Banga. The people in Banga are friendly and eager to put Kat to work in order to earn her keep. Kat is sent to the mines, harvesting gravity gems, fighting back the scarabs (navi) down in these dimensional planes, and all is good. Until it isn’t.

Banga has its own problems, it is operated by those who are considered to be the lowest class, they are exploited by corrupt business partners, and Kat gets to a flying start by fighting these injustices. When Banga returns to its home base in Jirga Para Lhao, the disparity and inequality become evident. Down below, in the darkness, lie a flotilla of houseboats populated by the poor, those left behind by normal society. Up above, float the islands housing mansions and the aristocrats in charge of, well, everything. Floating above them, the military on their huge battleship with the ruling council close by. It is a bit literal for a hierarchical society, but go figure. What is important is that the stories are diverse, and it gives Kat and Raven a chance to prove themselves as heroes of the people and gives you many little warm fuzzies.

Gravity Rush 2 has quite a few new features compared to the first game. Firstly, there is the camera mode. Yes, you too can take selfies of Kat and her surroundings, pose her at will, and dress her in whatever costume you desire (or pay for). The camera is used heavily in many of the side missions and a new treasure hunt mode, where you find a hidden casket using a photograph as a clue. Secondly, Kat’s gravity powers come in more flavours. Lunar mode, which is gained through a power-up, allows Kat to switch into a form whereby she can teleport her gravity kicks into enemies, and become light as a feather allowing for huge jumps to be achieved. Jupiter mode, its exact opposite, turns Kat into a heavyweight, allowing her to make massive momentum based attacks and beat larger enemies with ease, at the expense of being rather slow. These modes both add a new dimension to the game and new ways to defeat enemies, though some enemies can only be defeated with one mode or another.

Gravity Rush 2 has many side missions and challenge modes, borrowing many from the original game once the later arcs of the story come into play. All in all, I have spent over 40 hours in these various missions, side quests and little story arcs, and many of them offer limited replay ability, especially if you are quite pedantic about maximising your scores.

The voice acting is as good as the first game, with many of the original actors reprising their roles. The story itself is a little predictable at times, with some of the side missions being quite repetitive, but they are still fun. From the PS Vita game, the graphics have had a massive overhaul, and if you happen to own a 4k TV and a PS Pro, you too can enjoy the updated graphics in all of their stunning glory as the amount of detail which has gone into the world is bordering on obsessive. There is not a lot of repetitiveness here at all, well, at least when it comes to the world design. This is a nice touch in the game design, especially when in theory, nothing is ever out of reach.

Gravity Rush 2 is now available for the Playstation 4. While the game is not out for the console’s portable predecessor, the Playstation Vita (a massive oversight I believe) it is still an excellent continuation of the franchise and worthy of being in your collection. If you are a fan of strong story based single player games, and cute charismatic girls with weird powers, then dive right in!