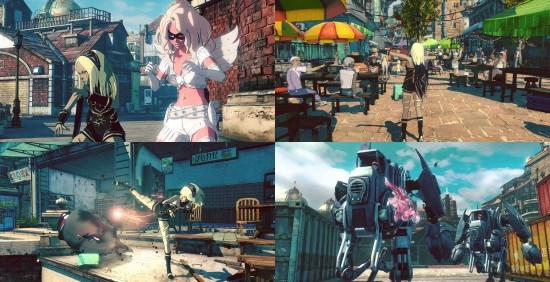 Four years ago Gravity Rush became one of the best games on the Playstation Vita, not to mention the best original IP published by Sony since.... well, possibly ever. With its unique gravity flipping mechanics and wonderful aesthetics the game became an instant hit and even saw heroine Kat launched in to Playstation's Smash Bros clone Playstation All-Stars Battle Royale and as a costume in Little Big Planet 2. But we video game fans are a needy bunch and one game is never enough so now, five years later, Gravity Rush 2 is finally here!

If you were expecting the story to pick up where the original game left off then you’re in for a bit of confusion, as when we return to Kat we find her not flying around the charming European-esque streets of Hekeseville but travelling with the Banga mining colony along with perennial wise-guy Syd and both Dusty, and her gravity-shifting powers long gone. To understand why (and believe me the game won’t really do anything to help you with this), you’ll need to watch some anime! The two part ONA was at one point supposedly going to be bundled in with the game, but that seems to have been dropped along the way. Instead you’ll need to hit up Sony’s YouTube channel to see Studio Khara’s work which will help fill in the gaps, though it appears that Sony helpfully forgot to add in any subtitles...

All caught up? Good. Now teaming up with the residents of Banga and Lisa, their tough leader with a heart of gold, Kat must track down Dusty and Raven, save her friends from the political machinations of an evil council, find her way home and also pick up the nagging little question left over from the original game of where did she come from anyway? It’s enough to make anyone else crawl back into their pipe house and pull the sheet over their head!

Even if the story sounds a little confusing to newer players, fear not because the gameplay those veterans of the franchise will recall is present and is as intuitive as it ever was. A tap of a trigger will switch off gravity, sending Kat hovering into the air. Another tap sends her hurtling in the direction the camera is pointing as gravity shifts until she hits a solid object that becomes her new ‘ground’ until either you change it back or the gravity meter empties (the meter is refreshingly fast to refill though, so there’s no fear of having to spend ages on the ground waiting or hunting collectables to refill it). The mechanic allows combat to be a truly 360° experience as you assault your enemies from all directions (and they you in some cases) and allows you to explore the labyrinthine streets of the towns you find yourself in at will. Again, as with the first game the visuals offer you constant hints as to what’s going on so that you can always orient yourself in the world and not get confused - cat's hair and clothes fall in the direction of ‘normal’ gravity for example, and a quick click of the right thumb-stick will reorient the camera to help you along.

Everything from the original game is present and correct just the way you loved it with, the exception of the gravity throw power which has now been changed so that it actually works. Thankfully pressing the circle button no longer makes Kat hover upside down in thin air, and she can now remain firmly rooted to the ground when grabbing objects to throw - a good thing as the throw power is now the best combat tool you have as you can rapid fire up to six objects (or even other enemies) at your foes to help defeat them. There are a host of new mechanics too, though these meet with a little more mixed success. The new Jupiter and Luna gravity styles which make Kat heavier and lighter respectively are a bit awkward to use and don’t feel as natural as the classic style. You’ll likely find yourself only bothering to use them during the instances the game requires you to, and then only reluctantly as there are some highly annoying draw backs to them - Jupiter style renders your gravity kick useless unless you spend time charging it first, and Luna makes you so light that getting back down to earth takes ages and also makes it nigh-on impossible to stop before you float over the edge of the ledge you wanted to be on).

A new first-person view however is an intriguing addition and playing the game using it in one of the busier area is a bit of an insane experience (though oddly there doesn’t seem to be any Playstation VR connectivity for this which seems best served). Kat's new camera is a fun little addition, allowing you to take pictures and selfies on your journey and posting these up for other people to review in-game, take part in online treasure hunts (again in-game – no mucking about with needless multiplayer here thankfully) and for use in many of the game's side missions. Mind you,the game's determination of what counts as taking a picture of something can sometimes be a bit wonky.

There are a few bugbears with the game we have to address though. A few of the side missions go on for far too long and sometimes require you to do actions that really feel far too arbitrary and not in the spirit of the game (a series of missions putting you as the stunt woman in a movie shoot becomes particularly frustrating, as they require precision jumping which the controls aren’t really suited for) and some of the challenge missions become insanely difficult if you want to hit the top ranks. Some of the later bosses also become a bit of a slog, with far too many stages combined with the bosses often just not taking damage from your attacks for large stretches of a battle with no visual clues as to why. Then, the game will suddenly announce that this has been a timed survival battle all along and they just didn’t bother to tell you so you couldn’t have won anyway - a trick the game pulls at least five times and it's always annoying.

The biggest annoyance though sadly is the camera. Why the camera from the first game which ported over to the PlayStation 4 for Gravity Rush Remastered couldn’t have been used I don’t know as it was great, but the camera here has a tendency to get bored of keeping track of where you’re oriented and go for a little spin, generally when you’re lining up an attack or needing to dodge something. One minute you’re fine, the next minute it’s like being in a washing machine. It’s not a consistent flaw it must be said and you can play for hours without issue but then all of a sudden it hits you, generally when you least need that kind of problem (like during the final boss battle for example). It's nowhere near as pronounced an issue as it was in the game's demo prior to release but it’s certainly a major headache when it hits you.

On the other hand though, you have the game's two shining star elements. First up, the game is gorgeous. Whilst the mining areas and rift planes are a little plain, the cities you find yourself in are bustling, distinct metropolises full of life and people, all rendered in the game's distinct cel-shaded art style. From the stunning colours of an Mediterranean-style market to some wonderful character design there’s little to criticise here. Secondly, the game's soundtrack is possibly the best I’ve ever heard, effortlessly capturing the mood of whatever is happening on-screen and giving wonderfully distinct feelings to each of the game's locations. Heck, it even makes the bizarre half-speech of the characters charming and cute (oddly enough despite not having actual dialogue all the characters are performed by over a dozen voice actors). I despise unskippable end credits in games as a rule, but I’ll forgive them here as it meant I could sit for five minutes and just chill as the best of the soundtrack played in the background.

All-in-all, Gravity Rush 2 isn’t quite as good as the original. The issues with the game are just far too frustrating for that and disrupt the experience too often, but this little action-RPG is still great and can easily hold its head up high as one of the best games on the platform. There's also certainly plenty to do - I clocked in at over 30 hours having done every side quest and challenge on offer. On top of that, there’s still DLC to come (free to begin with too, to make up for a two-month delay in the release of the game) but following that I genuinely hope this isn’t the end of the franchise as I’d truly love to see more of Kat, Raven and this wonderful world.

Then again, if Studio Khara want to make that anime into a full length series...

8
The Gravity Queen is back!