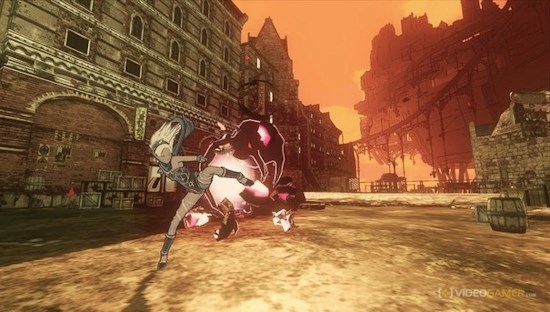 Sony's Vita may have successfully ported the likes of Nathan Drake, Disgaea's Mao and company and even made Wipeout cool again, but what Vita really needs is an icon; a USP. In short, the system needs a hero(ine), and if you look in the right direction you might just spot her...

Set in an industrial floating city high above a swirling red mist, Gravity Rush is a game unlike any other. Taking on the role of the amnesiac Kat, the game's self-appointed Gravity Queen can shift gravity to her will and take to the skies. As you progress, you'll learn new attacks and uses for Kat's powers, such as her grinding slide, flying kick and swirling attacks. It's a balletic game with an astounding sense of self; the city itself is as much a character as our Kat, with an industrial, steampunk style that permeates the screen.

Although the palette makes heavy use of brown and red initially, once you start to make progress you'll be taken to the purple-hued pleasure area of the city, as well as a giant, Hogwart's style school and even strange alternate dimensions filled with lava and glowing trees.

The feeling of movement is also fantastic - you don't so much fly as fall through the game, and Kat's hair and scarf always follow the natural laws of gravity, giving you a helpful (and often much needed) visual cue as to which way is really up.

Once you make some initial progress you'll be presented with a map, with Kat's underground home in the sewers acting as a hub with missions, side-quests and challenges highlighted in their respective locations. You can set markers to find each area easily, and Kat can also warp to various city blocks.

The game is littered with dark crystals, which you'll need in order to boost Kat's abilities. This takes the form of increased gravity meter time, falling faster, more powerful kicks... The use of gems is a great way to encourage you to explore the cities, as most are placed out of reach of normal people - under the city, on top of spires, rooftops... you really do need to poke everywhere!

As a character, Kat is an utter delight. A little ditzy but gutsy and earnest too, her comic-like cut scenes make cute asides to the reader as she progresses. Tilting the Vita at these moments shows off the layers used to make up the panels, and the artwork is just gorgeous - artbook please Sony! When in her Sewer home, Kat will laze on her bed, or if you're changing outfits she'll inspect herself in the mirror - they're little touches but they do help to add to the feeling that there's a real world behind that sexy screen.

There are some niggles of course. Controls take some getting used to, and the insistance on using touchscreen to grind and avoid attacks is a pain I could have done without frankly. Both problems can be surmounted with practice, and are nowhere near as bad as they are in, say, Kid Icarus on 3DS where the mechanics are so poor they're almost game-breaking.

Controls aside, the music is a little samey too - each city block has its own tune, but given how long you spend in each, it can grate, especially the odd tune that sounds like it was recorded in an elevator.

These are minor gripes though, and in the end I couldn't help but fall in love with Kat's world. This isn't just a game, it's like falling through a work of art. Dazzling, with enough side-quests to keep you engaged without ever feeling overwhelming, Kat's adventures come as close to visiting another world on a handheld as we've ever had, and it serves as the perfect counter-argument to the "phones make portable games consoles redundant" nonsense. The next time some phone-obsessed twerp shows you Infinity Blade on his iPhone, just boot up Gravity Rush and send his sorry ass packing.

9
Beautiful in almost every sense, Gravity Rush is Sony's killer app for Vita. This is a game that can join the likes of Ico and Shadow of the Colossus as a masterclass in Japanese gaming.