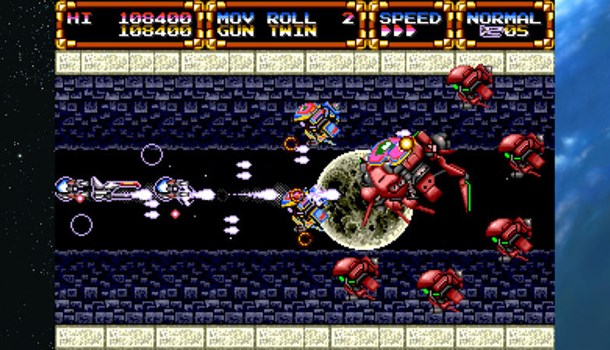 Originally released on the SEGA Mega Drive, Greylancer is a fondly remembered shmup from the golden age of 16-bit gaming. With availability limited to extremely expensive imports, the fact that you can buy and play this classic for under £6 should delight retro gamers and fans of the genre, especially since Gleylancer is actually good as well as rare. Extremely good actually!

And had this been a simple ROM port, that would have been enough, but the developer has lavished quite a bit of care on this title, including some very cool options I'd like to see other games take note of.

Let's start with presentation, which is extremely flexible to say the least. You can edit the ratio (4;3, stretched) and add the classic scanlines if you want the CRT look, but it doesn't stop there. You can add multiple shadow masks, CRT Gamma settings and even darken the corners and emulate screen curve. You can pause and add these effects at any time, the results viewable on the screen at which you left the game. Beautiful.

The "modern" version of the game comes with an English translation, the ability to swap out your Mover pods (auxiliary cannons for your ship) and set directional fire to the right analogue stick. It also has a wonderful feature that allows you to instantly rewind the game so that you can undo the daft mistake that got you killed, or even just replay an area you particularly enjoyed. The game's original cheats are also present for those that want to use them, with the ability to turn invincible and skip levels.

And for all the hardcore gamers, the original Japanese game is also in the package as a straight port.

So the game has the goods when it comes to options, but as I alluded to earlier, this isn't just a bunch of flashy extras wrapped around an expensive import, it's all built over an incredible game. The opening animation, told through a succession of manga-style panels, shows a fleet of ships engaging an overwhelming enemy, until a group of them are transported away without trace. It's up to Lucia, daughter of the Admiral that vanished with the fleet, to steal the experimental Gleylancer fighter and take on the enemy single-handed.

Gleylancer has wonderful gameplay, with your ship capable of mounting the aforementioned Movers. These cannons surround your ship and are available in several flavours, they directly influence the way you'll tackle each stage.

The use of parallax scrolling really graces the game with a feeling of speed, the enemy waves are smart and varied, all  of which taking place within gorgeous environments. Shooting through tight spaces, strafing a giant battleship, plumbing icy depths or dodging meteorites, it's clearly a labour of much love and way ahead of its time.

This isn't the first Western release of the game, and it's currently available on Xbox One as well, but for me I found this especially pleasing on the Switch's OLED display, which I've been enjoying since launch earlier this month. Having enjoyed Cotton Reboot back in July, it's been fun to load up a more traditional looking shooter before I inevitably succumb to the next to Cotton games in the pipeline.

It's a good time to love classic shmups!

9
A perfectly updated classic that's as hard or as easy as you want to make it.