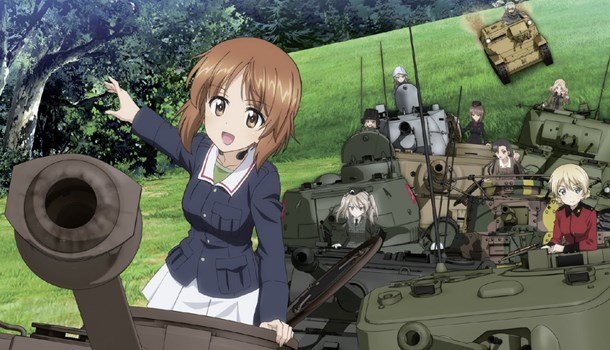 It’s probably no secret by now that Girls und Panzer is probably our collective favourite anime franchise here at UKA. Well, certainly our favourite without cat girls in it anyway. So the announcement of Dream Tank Match on the PS4 (a wonderfully region free console) last year was music to our ears. Even better yet was the confirmation that the South-east Asian region (covering areas like Singapore, Malaysia, Thailand, Philippines and Indonesia) would be getting an English language version which, whilst it foiled our plans to pick up a Japanese copy on our trip earlier this year, meant that we would actually be able to understand the game!

So, the question is, is Girls und Panzer: Dream Tank Match worth an import?

If you’ve ever seen Girls und Panzer (and if you haven’t, go see it right now - we’ll wait), then the base idea behind the game will be pretty familiar to you - two teams of tanks line up in an area and attempt to knock each other out. We’re assured that carbon-lined tanks mean that no-one can ever be hurt! (I am not sure that the Health and Safety Executive would buy that - ED). Dream Tank Match offers you several ways to enjoy this. You can run through some twenty missions or so that follow the main events of the film, play through a five mission tournament mode, run through a series of challenge events or you can jump into a free play battle either on or offline. It’s important to note that while the game does use the film as a basis for the story, you don’t need to have seen the film to enjoy this game.

The gameplay can best be described as similar to World of Tanks, except simpler. Left analog stick moves the tank and the right rotates the camera with your turret following along (if the tank has one). Because this is Girls und Panzer, the tanks can of course drift round corners at high speed and survive massive leaps off cliffs (Search the web for Russian Tank Drifting. You can actually do this – ED)

The game allows you to aim at specific locations on your opponents to try and hit a weak spot or take out their tracks to stop them moving all whilst you try to position yourself so that your heaviest armour faces their guns. Each commander also has a unique skill that will give you a small bonus for a limited time. Simple enough right? Well, it is. The games honestly not going to win any points for innovative gameplay design and whilst tactics might be used in an online match with friends the AI isn’t really going to assist you all that much despite what the tactical map and event log might suggest. The thing is though you don’t need all that much complexity when the game is such a huge amount of fun most of the time.

I found that the matches are fast, fun and often chaotic with swarms of up to ten tanks converge on each other with Maus’ and Panthers ganging up on Chaffees and BT-42s in an attempt to come out on top. Everything just feels right with things leaning on just the right side of being realistic whilst allowing for fun, more arcade-y-type gameplay to occur.

Everything is bolstered and tied together by the Girls und Panzer trappings that you’d demand from such a title. The entire voice cast from the anime and film return with even the most minor of characters fully voiced. This is not just in-match chatter but the game also includes new visual novel-style story segments to fill the gaps between rounds. The new scenes are brilliant and are true to the characters and the world while also adding in some brilliant new background and gags from Mika’s life as a secret foodie to Klara’s desire for cat ears. You’ll watch every one with a huge grin on your face and to make things just that bit better the soundtrack is pure Girls und Panzer with ever track you want bar the OP and ED themes present and correct.

Bandai Namco aren’t totally covered in roses though as there are a few niggles here. The biggest offender is a 5 minute survival match that pops up everywhere and is tedious and far too long given that there's no actual skill involved in driving round a wide open field and hoping nothing hits you. I found it hard to believe that no-one mentioned how boring this is in playtesting.

The difficulty curve of the story mode felt unbalanced with some missions requiring tens of attempts to complete whilst others have a habit of completing themselves before you get anywhere near the battle you’re supposed to be fighting in. (Sounds like Valkyria Chronicles… -ED)

The Jakosta team is woefully underserved with the developers failing to provide them with any of the nameless back-up tanks the other teams get, resulting in an utterly punishing tournament mode where you have one light tank against up to 5 opponents (and encountering super heavy tanks like the Maus basically mean it's time to restart from the beginning). I found that the movement controls could do with being a little tighter too as many of the tanks have a deadly tendency to stop almost entirely when turning apart from a couple who turn so fast and hard that they’re almost uncontrollable. It's also a big disappointment that no content from Das Final is present given the game wasn’t scheduled for release for a good 4 months after the OVA started its theatrical run and it would have been nice for the French team and Oarai’s newest tank (whose identity I won’t spoil here) to have been unlockable. With this game being a non-UK game, if these tanks became DLC, they won’t be available to non-South Asian or Japanese PSN accounts.

Overall though the game is brilliant and there's more than enough content here to justify the price (import copes can easily be found at around the £40 mark) especially if you love the franchise as much as we do. With Girls und Panzer reportedly coming to an end after Das Final concludes its run, we need to get all the fun we can out of this franchise and you’ll certainly get a huge amount of fun from Dream Tank Match. So pick your tank, customise the paint job, fit some decals and come find us in-game for some girl-on-tank action! No… wait… that came out wrong…

Also, if you want to try your hand against the UKAnime.net team, then join our forum and let us know your handles!

Because games don’t always tell you everything, here are our top tips for gameplay features you might not notice!