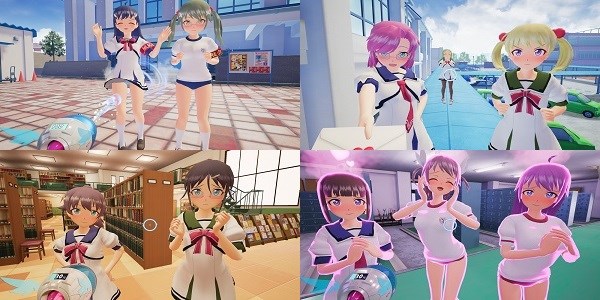 As most stories go these days, things are kicked off with a mysterious mobile phone app that has suddenly been installed on your phone completely out of the blue. Once clicked, you, as the nameless (and faceless) protagonist receive a delivery comprising of a strange set of goggles that look just like a VR headset, and a hand-held cannon that is able to suck up demons. Once you put on the headset an angel named Risu appears to help guide your quest. Once again, the antagonist from Double Peace, Kurona, is back up to her old tricks, and it's up to you to save the day from sexy danger!

You now have 30 days to rid the school of its sudden demon infestation and free the possessed girls. This is made somewhat tricker as the goggles trigger an intense attraction to you from any nearby female-types. Thus you must make use of pheromone shots and other skills to hunt down the demons and keep the randy girls at bay.

Much like its predecessor, Gal Gun 2 is a first-person shooter with a very comical and sexy tone to it. Where this game difference is that, rather than tackle the action "on-rails", you stand stationary as the girls rush in. Only once an area is cleared may the player move on to other areas.

From the design of the goggles and the way the game plays, it is clear that the developers created Gal Gun 2 with the Playstation VR in mind, though this isn't essential to enjoy the game. The player never directly moves forward and only really adjusts the viewpoint by using the analogue sticks. This is essential as the player can be attacked from anywhere, indicated with arrows alerting you to the direction of the next threat. Once a wave of enemies has been bested, a blue arrow will point to a marker that the player will shoot to move on to the next vantage point in the area.

The game's main story takes place over quests, which are broken up into main story missions, side story missions, and free missions. The aim of the game is to earn enough points to fill the quota before the 30 days is up. The missions fall into several categories - protecting the girls from attack, hunting items by exploring an area and the standard shooting levels to free possessed damsels.

As you may have gathered, the fan-service is a major aspect of the game, and there is a lot of it. This will be no surprise to veterans of previous games in the franchise, and the saving grace is how comedic and tongue in cheek it all is. Enjoyment of the game is largely down to taste, you'll either find the ecchi tone amusing or you won't.

The game has multiple endings that are dependent on how you interact with the game's heroines, girl-next-door Chiru and childhood friend Nanako. In order to interact, you gift them sweets which are earned as mission bonuses. Throughout my play-through, I never ran out of snacks to give them, and interacting with the girls gives you access to story missions for each of them.

The game's 30-day limit is managed day-by-day. During each day you can get two missions completed with time in-between to interact with one of the heroines in the classroom and the other at home at the end of the day. Unfortunately, this can get repetitive pretty quickly, and if you have a low boredom threshold, this will be an issue.

The gameplay is a bit clunky at first, with the shots being fired feeling like they're not properly hitting the targets and your vacuum attachment feeling underpowered. This changes when the game progresses and you get to unlock upgrades to the gun and goggles, which improves the gameplay immensely. The main problem is the game still feels a bit slow and awkward, most likely due to the VR element requiring things to be slow enough to control properly.

Some levels feel a bit overlong, especially the ones where the player has to protect girls from swarms of demons. Other than that the game is still quite fun in short bursts. That said, the novelty of the whole thing wears off quickly and coupled with the sluggish controls, this hurts the game quite badly. It doesn't help that the game itself doesn't feel quite as quirky and isn't as funny as the earlier Double Peace was. It's still fun but overall feels lacking somewhat.

6
A fun novelty while it lasts, but repetition is the true enemy here