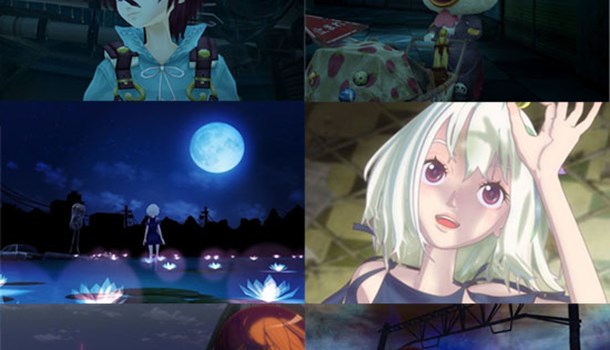 Every so often we encounter a game that has so much promise you can only hope that it lives up to the opening sequence that it shows you. Fragile Dreams is one of those releases, but can its art and audio style deliver a good gaming experience?

The game places you in the role of Seto, a boy who has been left alone following the death of the elderly man who took care of him. With no-one else left, Seto decides to head out into a world that has been ravaged by an unknown apocalypse to look for other survivors. During the early stages of his journey he encounters a mysterious girl who quickly disappears into a train station full of the ghosts of the dead. Seto decides to follow the girl to rescue her from the monsters in the dark.

Let’s get one thing straight from the get go: Fragile Dreams just oozes atmosphere. Everything from the graphics to the sound set the world up in such a way that you truly do feel alone, that there is no-one else but you, the girl and a strange chicken-headed man that sells you stuff. You truly feel the loneliness of the protagonist and it becomes a desperate search to find someone, anyone.

Graphically the game is one of the best you are likely to see, especially the drab indoor sections that have been ravaged by some unknown force, populated with the ghosts of those that lived there before. Outside you can encounter some breathtaking landscapes that use a fantastic array of colours, as well as light and shadow. It is a beautiful looking game.

The same goes for the audio, which uses subtle tones, unearthly ghostly noises and it even puts the underused Wii remote speaker to good use - hold it to your ear and you'll get hints (spooky!)

There are few games that can suck you into the world like Fragile Dreams and in this instance the game hits everything correctly on the head.

Which is a shame considering some aspects of the game are quite underwhelming. Combat is the main weakness, requiring timed button presses and a lack of player controlled lock-on which just degrades into frantic button presses in the hope of hitting and killing a ghost. The controls don’t lend themselves too well to all this either. There are times when the game gets confused as to which direction you are pointing and moving in, while standing still in first-person to look for something only breaks the flow of the gameplay. It’s all quite unwieldy and just helps to take you out of the game world that the atmosphere has done so much to pull you into. The game is also incredibly slow to start - the first couple of hours have very little in the way of actual progression and while it does ease you in, it can become mind-numbingly boring at times, especially when you need to start to retrace your steps.

While the game does have RPG elements, it plays more like an adventure game. Combat and exploration are the name of the game here, wandering around run-down areas with your torch as your only source of light and constantly trying to find fires, which allow you to save and look at the items you’ve picked up. Item management itself is a little mini-game where the player needs to arrange their items to fit into their case and pocket. The more important the item, the more room it takes and it requires some thinking about how to store it all. It requires you to plan and think about what you will need and what to pick up and when.

If anything, Fragile Dreams needs to be experienced. It is an unusual game, not just on the Wii but amongst games as a whole. It has a fantastic atmosphere, beautiful art design and some of the best audio you are likely to find.

Where it excels, the game is easily worth the cover price and needs to be experienced. Sadly lacklustre combat takes the sheen away a little. Still, if you’re after something unusual to truly lose yourself to, then you may have found your game.

7
A few flaws are unfortunate, but it is still something that should be experienced.
LATEST REVIEWS