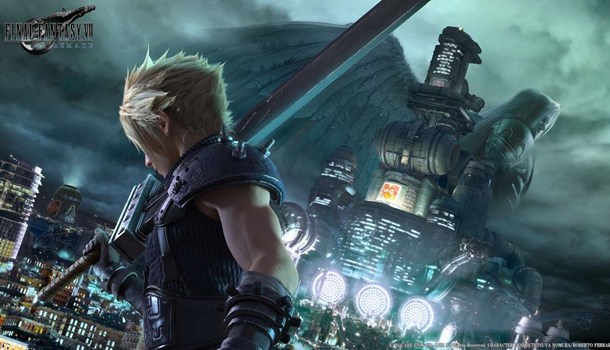 he remake to the hugely popular and influential RPG has finally arrived. Final Fantasy VII Remake is an updated and revamped version of the 1997 RPG that  was originally released on the Playstation One, taking the series into the modern era by overhauling the combat system and bringing unprecedented scope by switching from the restrictive cartridge system to the almost unlimited scope offered by CD's.

To start with, I feel like I should divulge my history with Final Fantasy and Final Fantasy VII. My first ever Final Fantasy game was the original Final Fantasy VII, which I received as a Christmas present in 1997. As a 9 year old I immediately loved the game for it's impressive visuals (at the time), amazing music and cool battle system that required a bit of thought and planning. Whilst not my first JRPG, this game was the one that cemented my love for the genre and probably that of video games. I saw this game as being not just another game but as a benchmark that all other games could be measured against. Final Fantsay VII was a showcase for gaming - a title with a deep plot, incredible music and requiring dedication to not only play but also master in order to unlock all the secrets it had to offer. Suffice to say that Final Fantasy ended up becoming one of my favourite video game series. The rich worlds brimmed with life and waiting for a new one became a game in itself, where my anticipation grew until I just could not wait any more to play the newest one. Fast forward to over 20 years later. I, now a man in his early 30's, has somehow not lost that feeling of anticipation and excitement for this game. The question is though; did this game live up to my expectations or did it leave me feeling disappointed and longing for how things used to be?

To summarise in a single sentence: I love this game. Final Fantasy VII remake not only met but exceeded my expectations. When it was announced that this game would only take place in Midgar and be split into an as yet to be determined number of instalments, there was the apprehension that this game would not have enough content to justify it being a full retail release. Thankfully this is not the case. On my first full playthrough of the game I clocked in just over 40 hours, taking my time to do as much as possible while still leaving the opportunity to go back and clean up a few side missions. The Midgar section in the original is an opening act that usually takes on average of around 5-10 hours to complete, so prior to release there was a preconceived notion that this game wouldn't have enough content as a standalone release. Thankfully the developers of the game took this as an opportunity to expand upon the city of Midgar and breathe a bit more life into the city and its inhabitants. 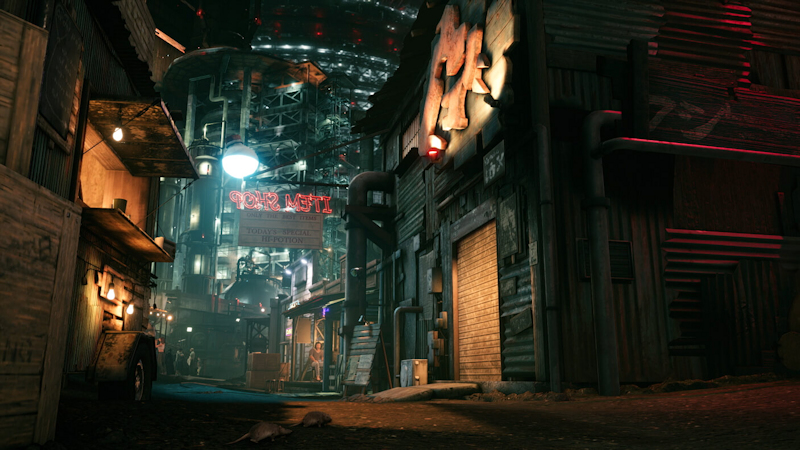 A common complaint with the original Final Fantasy VII is that Midgar, for such an interesting and unique location, was under-used in the game. Luckily this is rectified with this remake, where the setting is given a bit more character and feels like an actual city thanks to the expansion of each sector and adding new areas for the player to visit during the game. The world has been stunningly realised with impressive visuals, amazing lighting and ambient sound, the heavy industrialisation writ large with a mako-infused glow. The game looks stunning, especially in 4K with HDR turned on. The only slight letdown is some texture models on various items, the ground and water in particular look really low resolution. Thankfully it doesn't hinder or distract too much from the overall spectacle. Alongside the new locations and improved graphical fidelity, the Remake has also added new characters, most of which are used to reinforce how terrible the slums of Midgar are. These characters provide added depth with their observations, providing context and even a touch of comedy.

The story itself is a rather serious one. Taking place in a world where the planet's energy takes the form of a radioactive liquid known as Mako, this vital matrial is extracted from the planet and converted into electricity by the Shinra Electric Power Company. More than just a utility company, Shinra is also a massive conglomerate that pretty much owns everything in Midgar. They are in charge of urban planning, public order, energy supply and even the media.

The player takes the role of Cloud Strife, a former member of Shinra's SOLDIER infantry, now a mercenary-for-hire who takes a job with an eco-terrorist group called AVALANCHE. The game opens with AVALANCHE and Cloud infiltrating one of the Mako reactors with the intent to blow it up - the group's overall goal is to blow up all the reactors and stop Shinra from sucking the life force out of the planet. Where the remake differs from the original is that the story has a lot of supplementary scenes and more commentary on the characters about their actions and the reactions of the general population. Tied into this is the fact that the supporting cast, as well as the main cast, are given a lot more depth and development in comparison to how this early chapter was handled in the original. This is also where the remake may cause some confusing issues for new players, as Cloud has a lot more flashback scenes reference events that the original game took a while to address. For someone who has played the original, the way it handles these scenes was very clever and they flow elegantly into the narrative, however those playing it for the first time may be a bit confused. Tied into this are some new scenes and new developments exclusive to this version. Without spoiling things, I'll say that these new developments take the remake in a very unexpected direction that I for one completely loved and am curious to see how this will be expanded upon. 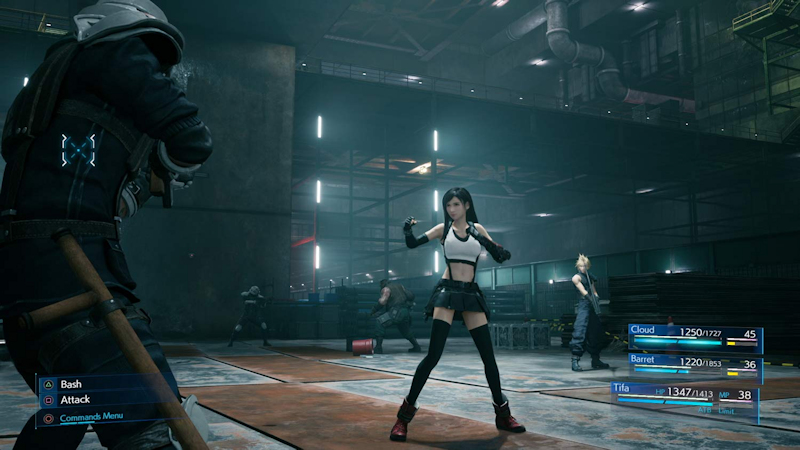 Fighting retains the same mechanics as the original

The remake maintains the basics of the original. Magic is controlled by a system called materia. These are small orbs of Mako that are equipped to a character's weapon and armour slots in order to cast magic, grant enhanced abilities, support other materia or give status bonuses. AP is earned in battle, and when materia has accumulated enough it will upgrade to unlock higher tiers of magic and more powerful effects. For example, materia that gives a 10% boost to Health Points will give 20% boost when levelled up, then 30% when levelled up again and so on. A new addition to the game is a weapon upgrade system that is similar to Final Fantasy XIII's Crystarium system. Each weapon has a node surrounded by sub-nodes that unlock bonuses when the character has the weapon equipped. As the character levels up they gain SP which is used to unlock these abilities. When enough SP is earned the weapon level of the character increases, unlocking more nodes and new abilities. These range from unlocking more materia slots on the weapon to granting it a higher attack or even increasing the odds of landing critical hits and recovering HP when defeating an enemy. Equipping the right weapon with the correct materia to maximise these skill sand abilities is a critical part of the game's strategy.

The battle system itself has also been revamped, shifting the focus from turn-based combat to a real time system. The game still makes use of the Active turn based system utilised in the original but in a different way. The ATB gauge fills when a character is attacking/time passes etc. Once a slot on the gauge is filled, an ability, item, or spell can be used. The goal of the battle is to fill this gauge as fast as possible in order to use these abilities. The abilities and attacks are used to stagger the opponents, leaving them more vulnerable to taking increased damage from attacks. The key goal in the battle system here is to switch between characters as often as possible to build up each characters respective gauge to land as many attacks and use as many spells as possible. This juggling takes a bit of getting used to, but once a player finds their rhythm then attacking, dodging and blocking feels natural. Along with this the game features a classic mode that attacks and blocks automatically for players, allowing them to focus on issuing commands, I honestly never used this mode and relied on the normal default setting whilst playing. That aside, the battle system in the game can get overwhelming at times, especially when there are a lot of enemies on screen and the camera gets a bit confused, but this niggle aside, the battle system is really fun, with plenty to maintain interest and keep everything feeling dynamic.

Alongside the aforementioned improvements, the game also takes advantage of voice acting every line in both English and Japanese. I played the game with the English audio and was pleasantly surprised with how polished it is. Everyone sounds great and bring plenty of life to the characters. Taking everything together, it's clear that lot of care and effort went into this remake.

As a fan of the original I am more than happy with how this game turned out. It ticks all the right boxes in satisfying my need for nostalgia and adds in quite a few new elements that really demonstrate why Final Fantasy is such a beloved series. Much like it's original counterpart. Final Fantasy VII Remake will be remembered as a triumph.

10
A triumph that breathes new life into a classic