This may be before the time of some of our younger readers among the iGen but decrepit old millennials like me may feel a flicker of recognition by mentioning I Wanna Be The Guy. It’s a game often cited alongside Cave Story as one of the earliest examples of the new wave of broadband-enabled indie titles that revolutionised the mid-2000s, reviving the Eighties “bedroom coder” phenomenon in the days before Steam was the ubiquitous arbiter of all PC gaming distribution (hard to believe but there was once a time, long lost to the misty aeons of myth, when you actually bought PC games in boxes from shops). I Wanna Be The Guy was a flower grown from the seed of Flash games on Newgrounds such as N, and it was an unusual sort of game, emblematic of the genre that came to be known as the “trapformer”. I Wanna Be The Guy was a joke – a sick practical joke. Grotesquely unfair, completely unbalanced, sadistically difficult and deliberately designed to actively force you to fail as much as possible, and so to win despite the programmer actively conspiring to make you lose would be proof of a gamer’s true grit. Does it make you angry? That’s the point – you’re just being filtered. Git gud, scrub.

As notorious as I Wanna Be The Guy was back then, and as many other games it inspired (Super Meat Boy is a direct descendant for instance, and “The Kid” from I Wanna Be The Guy even features in it as a secret character) it really came out before its time. Had I Wanna Be The Guy been released ten years later I don't doubt it would have been a memetic sensation, and the schadenfreude of watching livestreamers scream into their microphones loudly enough to generate feedback after each cheap death would have made the Five Nights at Freddy’s craze look like a damp firework in comparison!

Eryi’s Action is a 2012 game developed by the Japanese studio Xtal Sword and brought over in English by Nyu Media. Nyu Media has published a number of small “doujinsoft” Japanese indie titles in translation over the past decade but it’s best known for publishing the visual novel creation software TyranoBuilder. Despite its age, Eryi’s Action still remains fully available for purchase and download on Steam… and it just shows how robust (or encroaching) is Steam’s database – I think I last played this game in 2013 and yet on re-downloading Eryi’s Action it still had my save file completely intact! 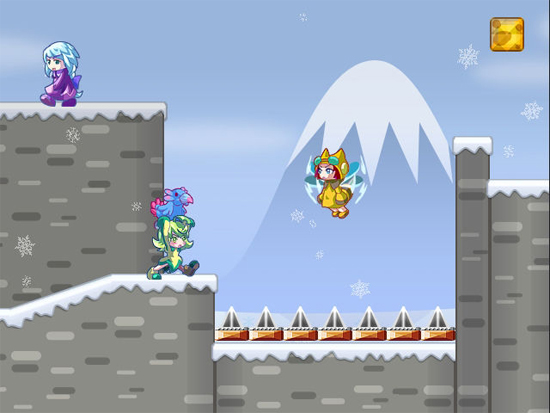 The first difference that distinguishes Eryi’s Action is more professional presentation. The graphics are bigger, brighter, more colourful and chunkier – if I Wanna Be The Guy was built out of Lego then Eryi’s Action is made out of Duplo. That comparison is not at all meant to be diminutive or disparaging – a Lego brick can hurt like Hell when you stand on it! I Wanna Be The Guy with its stark, harsh colours and bitty sprites can be a retina-searing assault on your eyes as much as a finger-breaking attack on your keyboard, but Eryi’s Action has a softer, more rounded and high-resolution look. More cutesy art is not a bad thing here, as something that is easier on their eyes is a source of relief when you are repeating segments dozens of times.

That repetition will be key to understanding Eryi’s Action. In modern gamer parlance, difficult games are often referred to as "the Dark Souls of [genre]", but Eryi's Action cannot be compared to it. Dark Souls has a clear and unambiguous gameplay loop and difficulty only comes from the tight precision needed to pull it off - however, there is very deliberately no method to the madness in Eryi's Action. Trapformers get their name because they are digital minefields – you are constantly being tripped up by hidden hazards that you would have no possibility of anticipating on your first play-through. You jump over a pit – you bump your head on the bottom of an invisible block suspended in the air and fall into the pit. You walk under what looks like a piece of background art – it drops and crushes you, so next time you jump over it instead, except now it leaps upwards and gets you from underneath! You jump on a spring and it catapults you off the playing field. You see a big shiny diamond that looks like it’s meant to be some sort of collectible – that’s just bait for the trap, try to pick it up and you’ll immediately be killed again by falling spikes. In an act of malevolent genius, you can even be attacked on the level select screen. Eryi’s Action becomes a game of memorisation and reflexes – learning the obstacles step by step, death by death, then hoping that your fingers will be fast enough to string all the dodges together when the time comes to attempt the complete run. 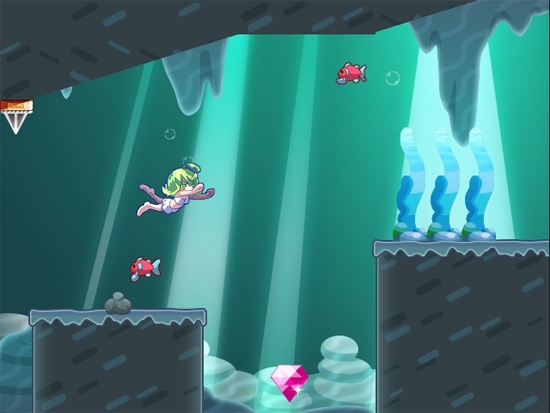 Just to write it in print makes the gameplay sound like a chore, but I ask you to stick with it for a little while at least, for there is a point early on in Eryi’s Action where it will make sense. Like most old-school platformers, you start the game with three lives. You’ll probably lose all three within about ninety seconds – so that’s it, Game Over already and kicked back to the title screen, right? Actually, no – the game continues on without missing a beat, except this time your lives counter reads “Eryi: -1”

Yes, that’s right – you start incrementing negative lives! Your reaction to seeing that is where you’ll know whether or not you get the joke. I hesitate to go into too much more detail about the obstacles of Eryi’s Action because that would defeat the game’s whole point – discovering the unknown and springing the traps in self-deprecatory slapstick is part of the experience. The Achievements on Steam are mostly about collecting many different types of death. Eryi's Action follows the Dwarf Fortress mantra that "losing is fun". Each time you come a cropper, you’re meant to slap your thigh and chortle “oh ho, well-played there game, you got me that time!” If you think you can play along with a living Tom & Jerry cartoon where you are Tom, then you will find a lot of humour in Eryi’s Action, but if it sounds pointless and you feel that it does not involve actual skill to you then you are wasting your time with it. Another point of comparison separate from I Wanna Be The Guy might also be Hanako Games’ visual novel Long Live The Queen, which came out in the same year as Eryi’s Action and is a title where the unintended consequences of decisions leading to your big-eyed pink anime princess coming to a variety of atonally sticky ends is also part of the natural course of play. 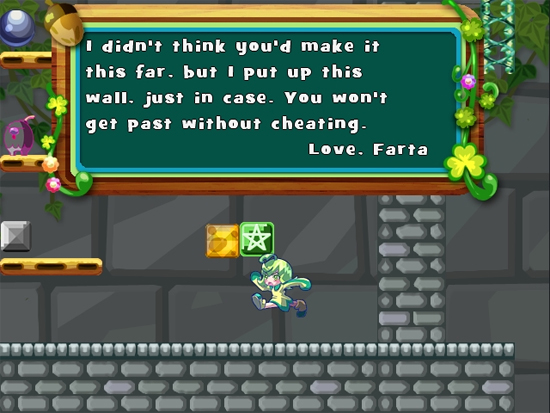 It’s not all just relentless trial-and-error, either, for Eryi’s Action does something which actually improves on its forebear. Whereas I Wanna Be The Guy was a bitter unrelenting war of attrition, a pure psychological endurance test of whether the game would break before your patience, Eryi’s Action does also change gears every now and again and requires not just rote recall but lateral thinking too. There are multiple sections where progress is not just about manoeuvre but a puzzle of block placement to set up protection from the oncoming hazards. Again, to give too many examples would undermine actual play, but to hint about the sort of things the game expects of you – on the second level, the turquoise mushroom is not just a death-trap but something you need at the end. The puzzles are never too strenuous but they are welcome for switching up the experience and smartly positioned to give you breathing-space to reflect and time to time to make sure it doesn’t become a bullet-hell bind.

The fundamental light-heartedness of Eryi’s Action is assisted by levels that are relatively short when completed at once, with ample checkpointing so that beats between breathing spaces are not suffocatingly protracted. It strikes a reasonable balance between entertainment and effort, and at a cheap £3.99 it’s fundamentally a harmless toy that you can play around with a bit with and not feel too hard done by if it does not quite click with you. Eryi’s Action is a gleeful little imp of a game – a big wide smile with a sharp nippy bite.

8
Roll with the punches and don’t take it too seriously and you'll have fun.