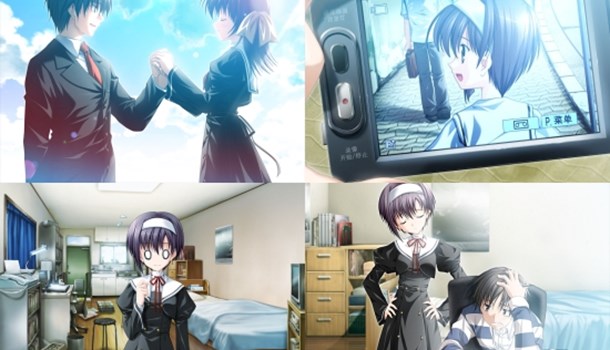 Of all the visual novels translated and released by MangaGamer since their inception, I have to confess that the announcement of their plans to release "Ef", a two-part visual novel from developer Minori, has been the one that excited me the most - having in turns enjoyed and been fascinated by its anime adaptation produced by SHAFT (and sadly only currently available in North America), I was more than a little keen to try my hand at its source material via an official English-speaking source.

Set in the fictional, European-styled town of Otowa - a town rebuilt and restyled after a devastating earthquake in its recent history - this first instalment of Ef effectively takes in two stories which are inexorably joined at the hip.  For this "first tale", we're introduced to the story via a slightly mysterious girl named Yuuko Amamiya, who recounts a story to what seems to be an old friend in an otherwise empty church.

Our initial protagonist for the first half of the story is Hiro Hirono, a high school student and professional manga artist entrenched in a never-ending struggle to balance his life as a student with his life under a pen name as an author.  When the fallout from a purse-snatching attempt brings Hiro to meet an out-going girl named Miyako Miyamura, who also attends the same school, the pair seem like chalk and cheese... but then again, sometimes opposites attract, and as time goes on Hiro and Miyako become closer while they both strive to find their place in the world, much to the chagrin of Hiro's childhood friend, Kei.

Once this love triangle has reached its crux, the second chapter of the game sees Kei take centre stage, more specifically through the viewfinder of our protagonist for this half of the title - Kyousuke, a budding film-maker and friend of Hiro's.  When Kyousuke sees a forlorn Kei in the school gym, something about her fascinates him, leading to him setting out to film her as his next project.  You can probably guess where things lead from here as the two spend time together, and once again the weighty question of what these two individuals want to do with their lives hangs heavily over the entire story.

With that synopsis done and dusted, let me get this out of the way early on - if you like your visual novels to give you a breadth of options and absolute control over the romantic destiny of the character whose body you inhabit, Ef really isn't the game for you.  No matter what you do, the final fate of the characters of this game is pretty strictly set in stone - yes, you can end up with a handful of "bad endings" that leaves any romantic machinations unresolved in either half of the game (unceremoniously dumping you back to the title screen in the process), but there is only one "good ending" that will take you through the entire game from beginning to end.  I'll openly admit - this can be pretty frustrating, particularly in the first half of the game where the apple of your eye and the game's pre-destined result can clash pretty fiercely.

Thankfully, there is a silver lining to this cloud, and that positive is that Ef is a beautifully written story with wonderful characters throughout.  Starting with our two male protagonists, these are no dull, lifeless characters for the player to insert themselves into - Hiro and Kyousuke are both very different yet strong-willed and determined young men with a dream, albeit with a gap in their confidence that threatens to leave them trapped by inaction.  Enter our two female leads, both of whom are easy to warm to in their own unique ways thanks not only to their characters, but also their dynamic with others.

In spite of a smattering of supernatural elements surrounding Yuuko, who acts as our entry point into the story and a "fairy godmother" of sorts to the characters in the game, Ef - The First Tale is really a beautifully realised coming of age story filled with believable teenage characters caught somewhere between their expectations and their dreams, and struggling with everything that entails while trapped by circumstances which threaten to shatter those precious ambitions mercilessly.  Ultimately, it's a story that anyone who has been through puberty and their teenage years will be able to relate to, and it's the ability to relay this feeling of uncertainty and helplessness while trying to find a place in the big, wide world which drives the story just as well, if not better, than its romantic angle.

Alongside this engaging story that blends drama, emotion and comedy with ease, the presentation of Ef is sumptuous - the artwork is superb throughout, with excellent character designs set against detailed, eye-catching backdrops.  The package is rounded off by a hugely effective and wide-ranging musical score which is both broad and enjoyable enough to accompany the entire game without ever outstaying its welcome.  Heck, even Hiro's ringtone in the game is excellent; such is the attention to detail afforded every aspect of the production.  In terms of MangaGamer's input (and that of original English translators NoNameLosers), the translation of the game is excellent from beginning to end, delivering its simple but affecting story as well as could be hoped for.

Limited though it may be in routes to play through and thus replayability (although its deceptively involving to complete the game 100%), if you play visual novels for the story rather than the more typical "win over the girl of your choice" aspect of such titles than Ef - The First Tale is an absolute triumph; a beautifully crafted and presented game in every way, with a story that everybody should be able to relate to in some shape or form.  Treat it as what it is - a visual novel, not a game and barely even an eroge considering how few sex scenes it contains - and you'll be handsomely rewarded.  Rewarded quite literally in fact, with the "good ending" to the game presenting you with an incredible piece of video animation directed by none other than Makoto Shinkai!  If that isn't encouragement enough to check out this game, then I don't know what is... it's certainly an addition to the bank of fond memories playing through this title which will keep me satisfied until the second Ef game is released in English.

You can buy and digitally download, or download a trial version, of Ef - The First Tale from MangaGamer.

8
Its scope as a game is strictly limited, but as a story-telling experience The First Tale is utterly beautiful and a great example of the visual novel genre at its artistic best.
LATEST REVIEWS