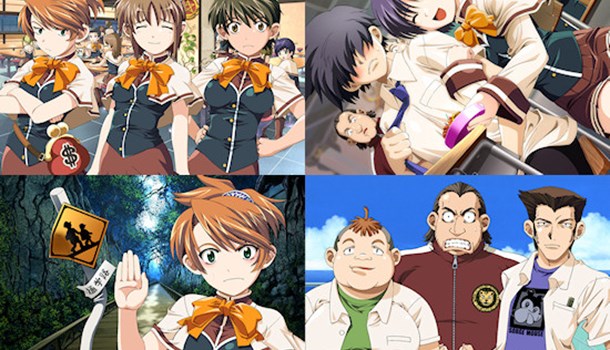 Picture the scene - as part of a group of unpopular, unspectacular and distinctly average ground of friends, life seems to hold a place somewhere between the mundane and the depressingly dull.  Then, out of nowhere, an unprecedented opportunity presents itself to you - the chance to take up a scholarship at an all-girls school on a remote but beautiful island.  You'd jump at the chance, right?  Of course you would.

It's exactly this situation which brings us to the premise of adults-only visual novel Edelweiss, developed by OVERDRIVE and available courtesy of the good people of MangaGamer, now complete with a complete reworking of its English translation and (if you so wish) available in a bundle with its spin-off Eiden Fantasia title.  Edelweiss sees you play as Kazushi Haruma, one of a quartet of frankly quite dumb young lads who have somehow lucked into gaining a scholarship at the all-girl school which is the centrepiece of Eiden Island - of course, gaining a good education at this particular establishment is very much of secondary importance to Haruma and company compared to their real goal of getting intimately acquainted with their fellow students.

The trouble is, Eiden Academy isn't any old school - indeed, Eiden Island isn't exactly your typical remote paradise, but instead a place of alchemical power that also happens to be filled with rather terrifying moving signposts and a decidedly unique coastline.  The dangers inherent to the island aren't enough to put off our intrepid male quartet however, as they waste no time in trying to catch the eye of the local ladies - something which they certainly manage to do, although largely not in a particularly flattering or attractive way.  It could be a long, long high school life if their early experiences have anything to go by.

Although I make it sound as if this game involves little more than floundering around hopelessly in the presence of girls, this is of course not entirely the case, and the game gives you a number of girls to get to know and pursue in the name of romance and all of the good stuff that comes with it.  This is all wrapped up (with varying degrees of success) by a slice of drama to accompany each girl's story arc, which with it reveals more about the island's secrets as well as delving into the character of the girl in question.

Before entering the realms of the dramatic however, Edelweiss is first and foremost a bawdy sex comedy, to the point where it should probably be called Carry on Alchemist was it not for the likelihood of anyone using that name being sued into the dark ages.  While this kind of humour isn't for everyone, it actually works well within Edelweiss for the most part - our quartet of male characters are lovably stupid for the most part, and their schemes, sniping and messing around deliver a dose of light-hearted fun, helped along by an equally enjoyable cast of females for them to play off.

As I previously mentioned, where Edelweiss is a little more patchy is with regards to its drama - some of it is great and surprisingly powerful coming from the midst of what is effectively a comedy (with Mizuki's arc standing out particularly), while other story arcs feel a little arbitrary and wishy-washy in comparison.  However, there's still a sense of satisfaction from following each story through to completion, so none of the stories available are really weak enough to be off-putting, and Overdrive certainly seem to have a knack for avoiding many of the pitfalls of the average visual novel.

This brings us to Eiden Fantasia, a spin-off visual novel which focuses entirely upon Sakura and Rin, two girls who are almost criminally under-used in the original game.  This additional content consists of three story arcs - one for each girl specifically, and then a brief story which is only unlocked after completing both routes which features the two girls together - I'm sure you don't need to use your imagination too much to imagine how that turns out.  In comparison to the main game's story arcs, these tales are much, much more light-hearted, but still fun in their own way and quite amusing at times to make for a nice way of rounding out the world of Eiden Academy for the fans.

Edelweiss might not by a mind-blowing highlight of the visual novel genre which will live long in the memory, and it might not have the same kind of emotional impact that other Overdrive titles like KiraKira mustered in places, but it's still very much a fun game that offers us more than enough entertainment to make for a laugh-out-loud experience that can still move you when push comes to shove in some of its story arcs.  The game is beautifully illustrated almost unceasingly and with no shortage of good character designs, to round off a game that somehow manages to be about more than sex and nudity despite featuring a constant obsession with, well.... sex and nudity.

The Edelweiss and Edelweiss: Eiden Fantasia bundle pack is available to purchase as a digital download from MangaGamer.

7
Edelweiss is a great-looking sex comedy that has something of a heart of gold beneath its bawdy jokes and laddish humour.
LATEST REVIEWS
13 Sentinels: Aegis Rim (Switch)