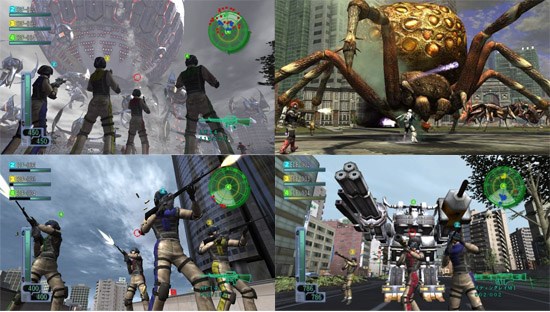 There are very few gaming related places you can go without the cry of “EDF! EDF! EDF!” ringing out as the next in Earth Defense Force games hits console. So its not surprise that when the Vita port of the original game that sparked all this was coming, there was much dancing in the streets. But is it the classic that we are lead to believe.

As the title suggest, you play as a solider in the Earth Defense Force when an alien armada appears in the skies. The aliens start attacking with giant ants of all things and it’s down to EDF to wipe the alien menace from the world.

I’ll throw my heads up and say that I have not played EDF before. That from actively avoiding the game, but more with the thoughts of “I’ll give that a try at some point,” promptly forgetting about it when something else came along. So when the chance to try out the portable version of the Xbox 360 game that kick started it all in the west... well, my hand shot up. I’ve heard that the game's graphics are far from the best, the soundtrack is bad at best and ant corpses skate across the landscape when hit with stray fire, but it was always the gameplay that is supposed to the key here.

The problem is, I find the gameplay boring after awhile. Granted I played a large selection of missions one after the other, and after constant ten minute missions of exactly the same thing repetition sets in very quickly. The main draw comes from the loot drops as enemies fall from your gunfire. Guns, health and armour upgrades are all up for grabs, which add slight improvements to your character at the end of each mission. The higher the difficulty the more valuable the drops become and this is where it keeps going and going. This, for me, is where I found EDF started to become boring, with the same shooting gallery gameplay turning up in every mission over and over again. As a bite-sized chunk to play with ten minutes to kill this isn’t so bad, but if you want to blast through the game the repetitive nature starts to become a chore.

While the original Xbox 360 version had split screen to play with, the Vita version for obvious reasons does not, so instead sports local and online multiplayer. However, the likely hood of finding another Vita with this game loaded up is very very slim, not helped by the fact that the online lobby is a barren ghost town of a place.

I can see hints of why people embrace the EDF games, and for something to play in some ten to twenty minute sessions it will fill that gaming hole. But for anything long term, then its cracks start showing through. I’ve tried to avoid talking about the price of the game, but in cases like this it does need to be mentioned. The game feels budget in every sense of the word and I personally have not been gripped by its magic that seems to have everyone else in its thrall. Add on the price of £34.99 (at time of publication) and it all becomes a bitter pill to swallow; especially as the much revered split-screen co-op is missing. Will EDF fans enjoy this version of the game? No doubt they will, but will they be willing to put up this amount of money for a six-year-old game with minimal added features? That is much harder to call.