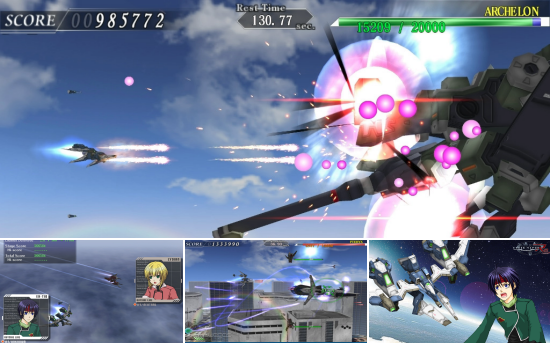 Fresh on the heels of the Exceed Collection, Nyu Media have picked up another excellent shooter, ETHER VAPOR by doujin game masters, Edelweiss.

The game's weapon mechanic is a staple of the genre - 3 types of shot to choose from on the fly; concentrated fire, spread attack and lock-on lasers must be keenly used to get the most out of your attack patterns. Hi-scores are obtained by following up an Overkill (certain destroyed enemies produce this) whereby enemies are worth 8x their usual point value for a limited period. Bonus zones give you a limited amount of time to kill enemies for increased points, and clearing a level in the fastest time possible will give you more points upon clearing a stage.

The game boasts a number of modes: Original, Remaster, Practice and Boss Rush should keep you busy, and the inclusion of global leaderboards should keep the score-chasers happy too.

The game has some great touches - in an early stage you turn from hunter to hunted as scores of missiles begin to trail you, and you have to use the cursor to lock on and destroy the trailing targets. It's the little touches like this which make the game stand out; bullet-hell purists may object to the breaking of a zen-like destructive trance, but I found it made the game far more memorable than the plethora of clones clogging up other platforms like iOS right now.

There were a number of things in the game I found particularly pleasing; the change of playing angle made for some wonderful moments (for example level one is mostly vertical, level 2 horizontal), and really shows off the game's engine. The music, while not quite on par with CAVE's best, is catchy, lively and enthusiastic, exactly the kind of soundtrack you need when blowing the hell out of enemies. I also appreciated the health bars over the enemies - I like to know when I've almost killed something as opposed to guessing.

Graphics are sharp and smooth running on my i7 Mac Mini (running Windows 7 & DirectX 10). As a doujin game, it's not system intensive and should play on most modern rigs without trouble.

Ether Vapor is a great example of the doujib genre. It's slick, aimed at a niche market and perfectly captures the spirit of independent gaming.

With it's multi-angled gameplay, reminiscent of my all time favourite SNES shooter Axelay, this is a winner. For the price, it's also a bargain. Bag it.

The game will be rolled out onto GamersGate, GameStop, GameTap and Steam soon.

9
Smooth, exciting and a real no-brainer for the money, pick this up and enjoy.