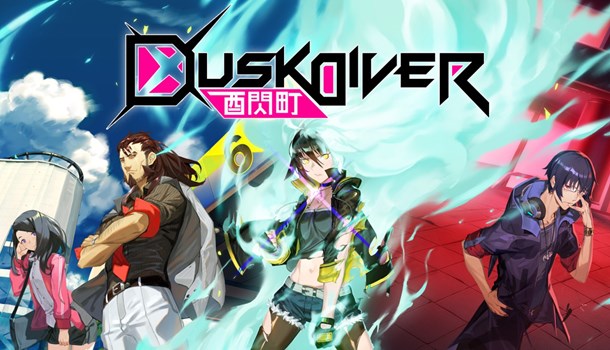 Dusk Diver is an anime-style action RPG that takes beat-em up gameplay and mixes it with a musou style that you'd find in Dynasty Warriors, while also applying RPG levelling up mechanics. The game focuses on a young girl called Yumo who unwillingly gets involved in a battle to protect the human realm from the phantom realm. With the help of a few chosen guardians, Yumo is granted the power to jump dimensions into the phantom realm and fight against the monsters that reside there.

For the most part Dusk Diver is a very simple beat em up Action RPG that divides its core gameplay into general exploration around the city sections and mission based fights in the phantom realm. In order to access the phantom realm, a special items known as Dragon Vein cores are required. Thankfully the game hands these out rather generously as rewards for finishing story missions and side-quests. The missions themselves follow a rather rudimentary set of goals which involves being transported to an area, encounter the enemies that reside there, beat them up and move on. This is done ad-nauseum throughout the game. There are a few platforming sections interspersed throughout the levels as things progress but the core concept does not change.

This makes the game a rather repetitive affair -fight, beat mission, use rewards to level up your character stats, explore the city for a bit. Add a few side quests that involve the same until you can move on with the story mission. While this may sound like a cause for frustration for some the game tries to alleviate this with how it plays.

For it's core mechanics; Dusk Diver delivers a simple yet fun system. Using a Musou mechanic of breaking down combat into a mix light and heavy attacks, dodges, jumps, special attacks and building up to a powered up state. Health and special attack bars keep things in check, with both being filled with orbs dropped by defeated enemies.

There is also a combo counter in the bottom corner - the higher teh rate, the higher the drops. Tied into this there is also a "perfect dodge" mechanic that, when activated, will slow down time and refill the special gauge. This system can't be abused as it is controlled by a timer. However reducing the cool down on this timer is one of the stats that can be upgraded.

With these mechanics in place the game tends to throw a lot of enemies at the player during each area they visit. The game reuses the same designs making fights feel like mob attacks, and aren't usually difficult to defeat.

As things progress the game introduces other enemies that cannot be attacked until their guard is broken, providing just the right amount of challenge. The game never really feels all that difficult and at time feels rather mindless and "button-mashy". However this only adds to the fun, allowing less-skilled players to enjoy the combat and create an arcade feel. There is, however, not much originality here.

With regards to presentation, the game boasts a very striking art style that is anime inspired (the game is actually set in Taiwan) with bright colours and cool visuals. In terms of sound, the music is fitting and the voice acting is a of a decent calibre - the game has a really fun script with some witty character interactions. However outside of the battle system there doesn't really feel like there is much to do. The town exploration has a system that gives rewards the more you eat there but this system can be easily abused from the get go as food is cheap and there is no other incentive for partaking in other activities.

Overall, Dusk Diver feel is a great game to pass the time with, but not one to be overly invested in. All the things it does feel a bit generic and by the numbers. A fun game then, but not one that is overly memorable.