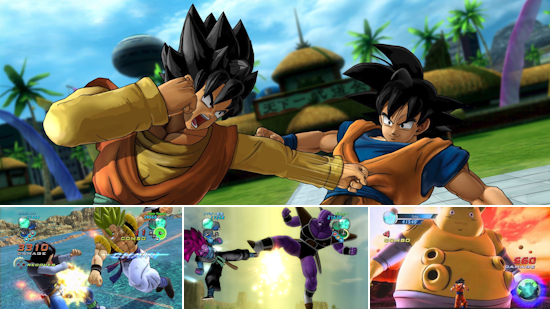 Ah, Dragonball. Even though the series ended 15 years ago, the franchise keeps going like a Saiyan-powered juggernaut.

I remember playing Dragonball fighters on the SNES back in the early 90's, though back in those days the best representation was a Streetfighter-style one-on-one affair with the novelty being that the screen would split in two when you took to the air. How times have changed...

The first thing that struck me when firing up the game was the impact of the presentation. Bright, kinetic menus (set in a spaceship cockpit), an energetic soundtrack and a plethora of modes certainly dazzle. The game gives you several modes to play with; Story mode (one for each of the franchise mainstays) versus, training and online.

Story mode ate most of my time, and the saga really does feel epic, kicking things off with the final confrontation between Goku's father and the villainous Frieza before shifting the story to Earth. The time-tunnel inspired loading screens (of which you'll be seeing an awful lot) gives the game a very epic feel, not to mention a sense of history which few other series could rightly lay a claim to.

The in-game engine is truly impressive. The graphics are rock-solid, and the visuals are Vaseline-smooth all the way through, topping any game before it with considerable flourish. The characters are wonderfully faithful to Toriyama's artwork too, and all-in-all it actually looks better than the series it was based on.

As blows are exchanged, clothing becomes torn and tattered, which may not change the gameplay, but it does add a level of interaction to proceedings.

As Goku, you'll fly above a hub-world atop your Flying Nimbus and take part in various tournaments and exhibitions. During these, you'll be dropped into a 3D playing field where you can attack your opponent up-close or at a distance. Fights consist of careful management - charging your chi for stronger attacks, attacking strategically and counter-attacking. Most of the moves are performed using timed inputs, chained together to form devastating combos.

While the fights impress visually, after a while they do become a tad repetitive, which is perhaps the game's only real flaw. It isn't as tactical as Capcom's stable, nor as technical as ARC's own fighters, which really turns the fights into spectacular-looking quick-time-events. While fans will look past this in a bid to unlock rewards and see everything the game has to offer, people new to the franchise are unlikely to get sucked in long term.

Similarly, no matter which character you pick to fight with (and there are over 40), the move-pool is generally similar - the lack of clearly defining characteristics for each fighter's move-set is why technical and tactical play are non-existent. Characters are more a choice of popularity than function, and this does make the game a more shallow affair.

To combat this, the developers have. for the first time, introduced the ability to create your own Saiyan, which is fun, if a bit limited. It reminded me a great deal of the Transformers: War for Cybertron character creation mode, which was also fun but ultimately lightweight. A nice distraction though, and something to build on in the future.

Dragonball Z: Ultimate Tenkaichi is a genuine love-letter to fans. It successfully captures the feel and the energy of the core series, and for that reason alone every Dragonball fan should pick this up. For everyone else, what you have here is a complete historical package of all things Dragonball, with a vibrant, exciting looking game underneath, making it a great place to start if you're interested in the story. It may not have the depth of a true tournament fighter, but what is here remains carefully crafted and easily the best Dragonball game to date.

7
Vibrant, exciting but ultimately shallow, DBZUT will be adored by fans, and entertaining in the short term for everyone else.