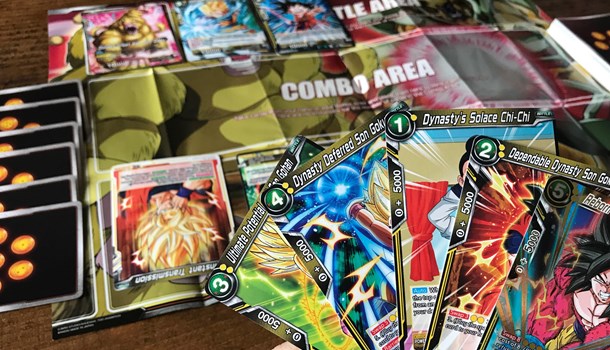 The Dragonball franchise started as a manga series written and illustrated by Akira Toriyama, which ran from 1984 to 1995. It follows the antics of Son Guku as he learns martial arts and travels the world in search of seven orbs. These orbs are known as the Dragon Balls due to the fact that they can be used to summon a wish-granting Dragon once assembled. Son Guku isn't the only person after the Dragon Balls and so he often finds himself in battles with competitors, but also finds some friends and allies along the way too.

Three TV series and many video-game spin-offs followed the manga and the Dragon Ball Super Card Game was re-launched in 2017 (it did have an earlier incarnation back in 2008) to allow fans of the TV show to re-create the great battles from series. The artwork on most of the cards comes straight from the various Dragon Ball series, but for the most part pulls from Dragon Ball Super. There are some original CG illustrations exclusive to the card game, with holographic variants thrown in for good measure.

Setting up is as simple as opening your starter deck, removing your leader card, having a good shuffle of the rest and laying out your play mat.

Obviously, there is also the pesky need to read the rules. If you’re like me and find the sheer amount if information to take in when learning CCGs (Collectable Card Games) a bit overwhelming then you might find a video guide a better option. There is a great official instructional video that has been put together to teach you the basic gameplay. Check out the video official video here, but be warned, it’s pretty intense.

If you want a quick summary of how the game works, like most two-player card-battling CCGs, players alternate turns and there are two key elements to the game:

Firstly, Building up the cards on your play mat in three key areas as follows -

Secondly, once you have played your cards it is then time to do battle with your opponent. Your aim is to attack your foe's leader card which has a starting health of eight and reducing this to zero is what will get you the win.

Each deck released has a theme linked to the TV series, with a different colour base and contains cards that work well together to give you a particular advantage in battle. I’ve learned to play using the Crimson Saiyan starter deck which has yellow coloured cards and your leader card starts as ‘The Golden Great Ape’. This is the fifth starter deck to be released and all you need to get playing is one of these and obviously your opponent needs one too. The other starter decks released so far are:

Starter decks contains one leader card and 50 other cards which are a mix of ‘Battle cards’ (44 in this pack) and ‘Extra cards’ (six in this pack). Five of the card designs are exclusive to each starter deck, meaning that you will only be able to get hold of these by buying the starter deck. A lot of the card designs are also duplicated, so you don’t get 51 individually different cards.

Although the themes, skills and artwork vary greatly between the decks, all starter decks are designed to give you a pretty even chance against any other starter deck and even playing an opponent with exactly the same deck isn’t a problem. So, if you are just starting out you can simply choose the a deck based on your personal preferences with no worries about it being weaker than the rest!

After you’ve got going with your starter deck you can then purchase booster packs, either in individual packets or full boxes to swap into your core deck. This is where you can start to gain more of an advantage over other players. Booster packs will contain rare cards with a certain amount guaranteed in each box. A packet contains 12 cards and a box contains 24 packets, so 288 cards total and they can be quite pricey if you want to get the whole box to make sure you get those rares!

It doesn’t end there, as there are Special Packs, Ultimate Boxes, Gift Boxes… the list is endless.

Some thoughts on gameplay

Let start with understanding the game. With the help of the official instructional video I was easily able to get going. It would be particularly useful for anyone new to CCGs. However, one thing that is not clear just from watching this is how each card's special abilities work. I guess it’s not easy to concisely explain these in a short film as they are so varied. You therefore have a few options:

However, due to the repetition of cards used in a starter deck, there's less to learn than you might think, and with any game of this type, the best way to learn is by playing. Since gaming cafes are popping up everywhere now, it's also worth finding one near you and playing people who are already familiar with the game. It never hurts to be social!

The basic game is easy to understand, making it appropriate for younger players, but the added complexity of the special abilities gives it appeal for all levels of player. The energy dynamic is a familiar CCG mechanic which prevents players from starting too strong.

I also haven’t previously mentioned the ‘Activation’ factor – once your life force is down to four you can play an energy cost in order to ‘Activate’ or turn your leader card over, transforming it into a stronger card with more powerful attacks. This is also a familiar mechanic from games such as Cardfight Vanguard, and sometimes taking damage in order to activate more powerful attacks is a wise strategy.

Overall I enjoyed playing and found it to be a well thought out game. Like nearly all CCGs I found the card special abilities really over complicated but this is partly due to a lack of time to fully study the nuances of the game. In time I’m sure all these abilities become second nature to players and after all, half the fun of these games is learning the card abilities, figuring out the best way to use them to outwit your opponent and adding new abilities to your deck with booster packs.

Praise must also go to the Dragonball Super team for the great amount of easy to use support materials that they offer, including a tutorial app that allows you to learn how to play. Head here for more info!

Like all CCGs, Dragon Ball Super has the potential to send you down a financial rabbit-hole, but if you’re a fan of the various TV series or a CCG addict, I guess there is the potential for you to end up in Wonderland!

Do you fancy a go yourself now? You might just be in luck as we have some trial decks to give away! Click here to enter our competition that runs until the end of February 2019.

7
Definitely worth checking out if you love the TV series or are a fan of CCGs.