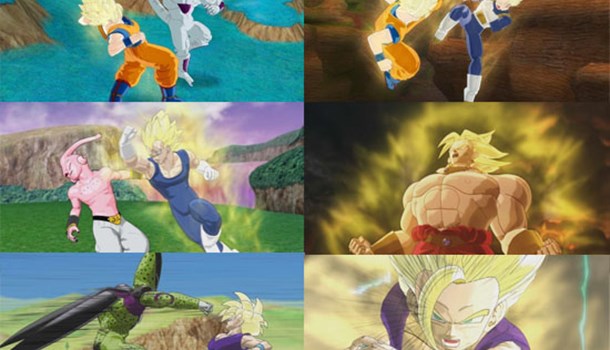 As we've seen from recent reviews of Attack of the Saiyans and Revenge of King Piccolo, the Dragon Ball franchise holds plenty of potential when it comes to making the transition to video games, be it an RPG or (more predictably) a traditional fighting title.  It's the latter genre that Namco Bandai has targeted with Dragon Blast: Raging Blast, which brings a barrow-load of all-out action to this generation's "true" next-generation consoles, the Xbox 360 and PlayStation 3.

While Revenge of King Piccolo on the Nintendo Wii looked to weave the Dragon Ball story into a single, coherent narrative, Raging Blast does away with this for its "Story Mode", instead splitting the main single-player element of the game into the anime's various sagas from Saiyans to Super Saiyans and with pretty much everything else you could dream up in-between for you to choose from.  For each of these sagas you can play through and unlock the unfolding story segment by segment as you progress, filling the boots of whichever character wins the battle in question during the course of the original anime; this limits your character choices somewhat (and even sees you switching characters in mid-fight at times) but becomes an inevitable side-effect of remaining in-line with Dragon Ball canon.  To be fair, these limitations are worked around somewhat with the inclusion of a fair number of "what if" scenarios, that set characters against one another outside of anything which ever took place within the series itself.  In case you need to be appraised of the Dragon Ball story at any time, plot recaps are available before each segment of any of the various sagas available, albeit only by way of an incredibly sluggish piece of scrolling text.

Outside of the game's major story mode, you'll find a "dojo" which contains a handful of tutorial and practice modes, a good old-fashioned versus mode to quickly set up a bout between any characters of your choosing (assuming you've unlocked them in story mode already - always a frustration when it comes to those drunken nights in with a couple of mates), the ability to customise your attacks and items you can use over and above a character's normal presets (a nice touch which adds a little more strategy to the title) and a "museum" which contains an encyclopaedia of all things Dragon Ball, saved replays and in-game music for you to enjoy at your leisure.

On the online side of things, you have the ability to set up ranked battles, allowing you to find other players from across the globe that match your level of utter ineptitude, set up a game against players on your Xbox Live friends list or you can even set up a world tournament consisting of up to sixteen players.  Unfortunately, finding players for ranked online play seemed to fail miserably more often than not during our testing, so chances you'll want to stick to finding some people you know who also own a copy of the game.

Once you've picked your gameplay poison and find yourself within the game itself, you'll immediately find yourself transplanted into a world inhabited by the cel shaded heroes and villains that you know and love, all superbly rendered and crafted in 3D here - Put simply, the character models look great, and I only wish I could say the same of the landscapes and scenery they inhabit, which sadly are rather bland (albeit passable) in comparison.  Still, the good news is that most of these landscapes feature rock formations and mountains that you'll be able to smash your opponent through in due course, plenty of sky to fly around and pose in like.... well, like a character in Dragon Ball, and even water that you can scrap away in with little concern for such fripperies as breathing.

As for the gameplay itself, what initially seems like a button-mashing nightmare is soon put straight by running through the tutorial sessions (it's far preferable to reading the manual, trust me) and after a little practice you'll find that Raging Blast's control system is actually pretty simple to get into your head, with the D-pad used to charge Ki, the right stick used to select super attacks once your Ki is charged, and the various other buttons used to defend, attack, soar into the skies or descend from the heavens.  Having said that, the control system's simplicity doesn't stop it from feeling a little clumsy at times, although to be quite frank I can't think of any better way it could have used the Xbox 360 controller's resources so this isn't really too much of a black mark against the game.

What does tend to grate a little however is the longevity of many of the bouts - Yes, I know it's deeply ironic to complain about battles which last too long in a game based on an anime where the average fight would last several years of actual viewing time, but when translated into video game form there's a risk of boredom setting in quicker than it might were bouts shorter and more focused.  Of course, your mileage may vary and you might well welcome the step away from a lot of other fighting games Raging Blast has taken in this sense, but it wasn't for me as I was left wondering just how much longer I'd have to carry on pummelling my opponent before he'd finally submit and give me a breather.  This issue is somewhat exacerbated by some frequently horribly camera angles during battle and a computer AI which seems to have a knack for suddenly getting "into the groove" out of the blue even with the difficulty toned down, bringing forth periods where there's little else to do but try and bring your fighter round as he's smashed from one rocky outcrop to the next before being hit by some particularly spectacular special attack.

Still, if you're a Dragon Ball fan then Raging Blast is a real labour of love which will leave you looking like a kid in a candy store when you first fire up the game; so many classic stories to jump into and play with so many characters, costumes and customisable attacks it's hard to know where to begin - It really is a feast, and you get the feeling that every path has been trodden in bringing the full Dragon Ball experience to this title, all of the way down to the music and Japanese voice actors employed here.  The trouble is all of that care and attention lavished on the small details has perhaps overlooked the most important facet of this (or any) game - The fun factor.  Once you dig beneath all of those options and customisations, you're actually left with a pretty bland rinse and repeat fighting game that never really gives you that "one more game" feeling that any good title of this genre should have.  It's a real shame, as all of the components appear to be in place for a memorable Dragon Ball-based gaming experience, but when it comes to the execution the game feels oddly lifeless in a way that's difficult to pin down.  Unleashing spectacular attacks against either the computer or one of your friends shouldn't feel like a chore, yet in Raging Blast it occasionally threatens to become just that.

6
It's a comprehensive treat for Dragon Ball fans - If only Raging Blast were as fun to play as its thorough range of options deserves.
LATEST REVIEWS
13 Sentinels: Aegis Rim (Switch)