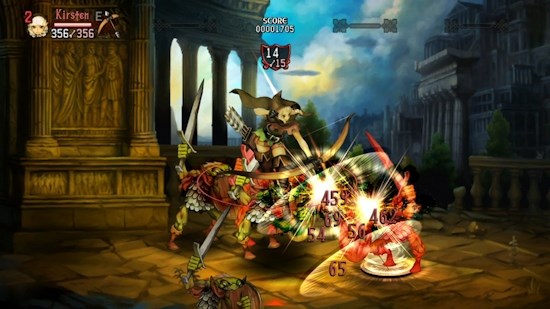 Dragon's Crown has been teasing us with its presence for well over a year now. Constantly delayed as studios and publishers rose and fell, the game finally received a US release via Atlus in August, with a UK release imminent. Since I use a US account for my Vita (which has its drawbacks - the EU sales have been superb in the last year) I did at least get the pleasure of getting the title a little early. So was it worth the wait?

To start, let's go through what the game is. It appears for all the world to be a scrolling beat-em-up circa the 1990's. Big sprites walking left to right bringing the smack to numerous nasties. And while it is that, the game has a much deeper and more satisfying set of mechanics driving the game.

In many ways, Dragon's Crown is an RPG. You earn points, money and items with each foray into the various locales, and these can be used to upgrade your character skill-sets, weaponry and items. With use, your equipment will take damage, so you'll need to keep repairing it between missions, or else risk losing the item altogether. It brings a risk/reward mechanic that will see you scrutinising your load-out with the beady eyes of a VAT inspector - all equipment has properties that protect or are effective against certain elements/enemies, and to that end you can actually split your equipment between bags and load scenario specific equipment at the flick of a button. All in, it's a beautifully realised and balanced system that lends the game a tactical edge in place of senseless button mashing.

In order to arrive at your intended mission location, you'll start by using a magical portal, but as the story progresses, this will break down and start sending you to random locations - in order to attack a specific target, you'll have to hire horses from the stables, further eating into your valuable cash-stash. It really is quite twisted in its genius.

You have the choice of six character classes, which really split themselves into 3: Brawlers (Valkyrie, Knight, Dwarf) Magic-Users (Magician/Witch) and ranged (Elf). There are nuances that separate each, but your play preference will come down to those basic choices. Of course I started playing the Elf based purely on the fact that the Elf design is gorgeous (more on this later) and that Bows are cool.

Once selected, you'll start the story, but thanks to the local tavern, you can recruit additional characters to fight with you. As you battle through the stages, you'll find the bones of fallen warriors that can be taken to the monastery and buried (resulting in the occasional reward item) or resurrected for a fee - once back in the land of the living, you can use them on missions. It's another beautiful layered mechanic that just has you scratching your head wondering why nobody has done this before.

On top of the computer controlled backup, you can also randomly jump into other real-life parties via Wifi, which is a great idea and seemed to work well in practice. There are some battles where the NPC-backup is bloody useless, in particular one baddie is only vulnerable if a nearby candle is lit - unfortunately once lit, the candle is then susceptible to attack by the baddies, and getting the AI help to defend the candle and attack the right baddies is a nightmare and a half.

You may have noticed I've left the design to the end of the review. Oh yes, much is the debate surrounding those exaggerated designs - the witch's ample assets and the Amazon's rather over-toned (and very exposed) body in particular, and in still shots you could have a point. In motion however, it all makes perfect sense. The animation is gleeful in its detail - the witch runs chest out, one hand on her hat with long, graceful strides. It looks fantastic and is actually quite comical and endearing. The Amazon's butch appearance informs all of her movement, which is full of attitude. The Dwarf is joyfully aggressive, the Knight quite pompous and the magician quite gothic and mysterious. The point is that you believe the characters as soon as they're on screen. They're glorious creations, and if you have the good fortune to come across the artbook, you'll see the sheer attention to every detail, and none of it is wasted. Dragon's Crown is probably the best looking game I've ever seen in motion. It's artistic and beautiful, and the confidence of the execution just makes your eyes bleed.

And as if all that weren't enough, the game has English and Japanese language options available (my Elf, Mia, is set to Japanese because it sounds cuter than the inappropriately obnoxious American teen equivalent). Early adopters will also get access to multiple narrators for free, but don't bother. The default narrator, JB Blanc, is just brilliant. He's a stone-cold legend in voice actor circles, and his dulcet tones on the game are like honey on warm toast. Changing him would be like slapping your mother. Don't do it kids.

Dragon's Crown is a rarity that joins Persona 4 Golden and Gravity Rush as being distinctly Japanese flavours on PS Vita that, on it's own merits, justifies the purchase of the console. It's a game that truly is all things to all gamers - nostalgic, ultra-modern, hip, gorgeous, immediate and self-aware. Good God, it even tips its hat to Python, having you fight the terrifying, bloodthirsty terror that is a cuddly bunny at the end of one level. It's the FLCL of games. I hear it's also available on PS3, but you know you want it on OLED... It's what the cool kids are playing.

10
A hat-tipping ultra-modern take on a genre classic that has both a sense of humour and a beautiful sense of style. If this game were a woman, you'd marry her.