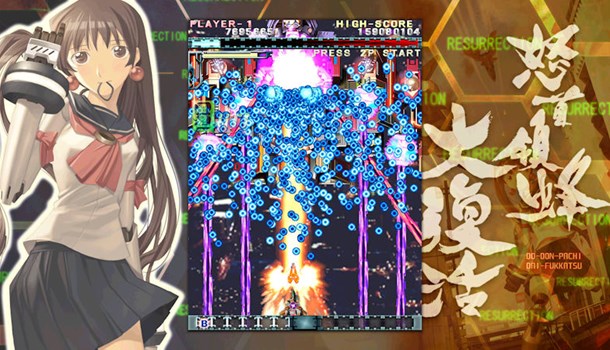 I’m not the worlds biggest fan of bullet-hell shooters. Oh, they’re fun enough for a while but I lack the godly level of skill required to be halfway decent at them (its been three years and I still can’t pass stage two on Ikargua), so imagine my surprise when fourty minutes after starting Dodonpachi Resurrection I had to put the controller down because I’d finished. Dodonpachi you see, is that rarest of games – an arcade game that understands it’s not on an arcade anymore, i.e. it understands that you’ve already bought the game so it doesn’t have to kill you every three seconds to get you to put in more money.

Although this alone should be enough to make me love the game, it sadly isn’t enough to cover over some major flaws. As a bullet hell shooter it can be forgiven that the story is lacking (all you really get are text screens upon finishing the game) and all it really is anyway is just an excuse to draw cute girls for the box art.

The graphics are competent but look like they were ported from a Gameboy Advance title, which is a little disappointing given the nice cover art and the fact that the game is only four years old. Its not helped by having 50% of your screen taken up by a border which leaves you very little room to actually be able to see what’s going on.

As my initial playtime shows the game is also pretty short, but then again the whole point of the game is to grab massive scores and multipliers with achievements present for nigh-on impossible feats like 10,000 hit combos. There are multiple game styles to select but all they really do is provide very minor differences and different borders. Apparently there are some additional stages and bosses across the various modes but despite my best efforts I was never able to meet the requirements for them (which include tasks like surviving all five stages without dying or continuing, or being able to do it multiple times!).

At the end of the day though, you just have to ask yourself - is it fun enough to justify a purchase? Well, given that the game is pretty cheap and most copies come bundled with the soundtrack CD I’d have to say that yes, it is. It holds the hands of new (or in my case poor) players whilst providing a huge list of challenges and extras for more hardcore fans of the genre. All it needs to push it above average would have been a spruce up on the graphical front, although on the other hand you can also grab this game for iOS where it probably looks much better.

5
Concessions to less-skilled players make up for poor presentation.