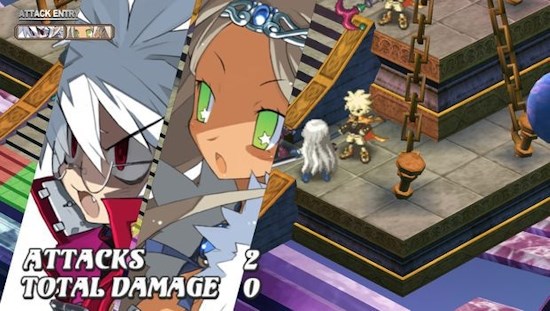 Disgaea 3 on PS Vita has the good fortune to arrive in the drought that seems to have followed the initial hardware launch, which means that not only will get a little more (well deserved) attention, but you'll actually be free of distractions and able to give the game the time it requires. And make no mistake, Disgaea 3 demands hours of your life.

Set in the Netherworld's Evil Academy, you take on the role of Mao, son of the Dean and possessed with the notion that his father must be destroyed for deleting his precious save game file. Along he way he'll encounter the deviant Raspberyl (who rebels by being punctual, polite and attentive), hero-in-training Almaz and even characters from the other three games... It's as daft as a brush of course, but that's Disgaea for you.

Set on an isometric 3D plane, Disgaea is a tactical RPG that allows you to create your own party of monsters and demons and go on the rampage on a never-ending quest to increase your stats and become master of the Netherworld.

There's so much to do in Disgaea 3 that it's almost overwhelming. Thankfully the game is very well paced, giving you tutorial levels to explain Magichange (monsters can be partnered with other characters and turned into weapons), Geo Cubes (highlighted areas affect stats) and Evilties, Specials, Super Moves, Item Customisation... the list goes on. But the work is well worth the payoff, and you'll soon be mixing it up with the nastiest bosses in the game and developing your own customised tactics.

Presentation in this game is an absolute joy - the sprites are detailed and adorable, the character designs sharp and well animated, and the main script is fully voiced to a very high standard, a real credit to NISA's quality control. Speaking of the script, it pretty much won me over with it's oblique reference to Gundam with "Super Alloy Seed Destiny". Classic.

The Vita version of the game, in common with all the NIS handheld Disgaea franchise, comes with a plethora of extras. All of the DLC from the console version is unlocked from the start, which makes the game an utter bargain. It also has new features not found in the console version, including;

Item Customisation, which now allows you to edit the look of a weapon as well as the stats, which is a great inclusion for the Disgaea hardcore.

New bosses have been added with new, Vita exclusive, quests.

Touch panel controls have also been added, though to be honest I found these more of a hindrance than a help. Happily they can be switched off.

New skills, Super Moves and a magic class called Tera have also been added, giving the game even more depth.

Finally, there's the Record Shop, which allows you to view the stats and rankings of other players, lending a competitive edge to the world's greatest time-sink!

I could go on - it's incredibly addictive, and the staggering value for money (the game is under £30 online) and the sheer amount of activity on offer makes this game a stand-out on Vita. No other game on the platform has this much depth, and only those who vehemently dislike tactical RPG's could deny this game a place in their collection.

Utterly essential. In fact, why am I writing this when I could be levelling up?

10
Almost endless, Disgaea 3 really is an entire world at your fingertips. If you own a Vita, you need this game.