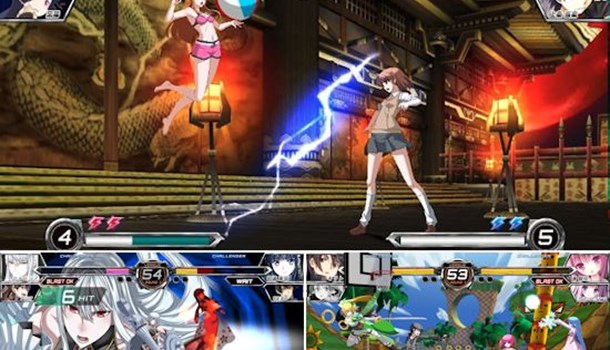 Now here's a novelty - a fighting game based on the Dengeki Bunko brand of light novels, and this game celebrates the 20th Anniversary by pitching some of the most popular franchise characters against each other in 2D brawler combat.

Published by SEGA, and therefore including a few of their own characters, this gives us 14 playable (P) characters with assists (A) provided by a further 23. That's a lot of character combinations right there, and while some certainly fight better than others, it's a pretty well-rounded group all in.

So which franchises do we have on offer? Well, let's just list the series with playable characters to start with:

The expanded assist roster grants us plenty of characters from other franchises too. I won't list all of them but notable are: The Devil is a Part Timer, Boogiepop Phantom, Bludgeoning Angel Dokuro-Chan, Kino's Journey and Spice and Wolf. Basically, there's a lot!

The game is only available in Japan (and given the licensing rights, likely to stay that way) so menus can be a pain to navigate. Thankfully all the ones that matter are actually in English, so you can select Story Mode, Challenge and Online very easily. The extras, which offer voices and occasional character art, are a bit trickier. Like DJ Max, the core gameplay is easy to enjoy, but a lot of extras are lost if you don't speak the language.

As for the gameplay, it's a very effective fighter. Almost all the character movesets are activated by the same motions and button combinations, which makes the game extremely easy to pick up. I actually like this, as it allows you to focus on the character's moves rather than waste time trying to remember what you have to press to get things going.

3 buttons control attacks - weak, medium, strong, while the fourth summons your assist character once you've built up your assist bar. The Climax bar powers your blast attacks (to escape combos) and super moves.

Matches are silky smooth, with a great deal of fluid animation, easy-to-operate assists (which can aid you or attack) and great super-moves. Your ability to call assists and enact super-moves are controlled by a power bar, which builds as you play. You can also use enhanced moves, standard specials with added power, at a lower cost of the bar.

Graphics are solid if not spectacular. The Vita has already showcased some of the best handheld 2D character modelling via ASW's Blazblue, but the pixel art of the characters on hand is nice enough, with great expressions and poses evoking a real tour-de-force in brawling.

The stages also deserve a special mention - the ability to watch/play with beloved characters like Taiga and Misaka on the Sonic stage is just wonderful, and with Phantasy Star Online, Border Down and Valkyria Chronicles, it's a bit of a Sega nerd's dream come true.

Story mode ofers you the chance to unlock 2 new characters - Selvaria and Akira, and both are worth unlocking. I was a bit taken aback by Selvaria's character art though, it's gravity defying!

The version I purchased was the Sega Store Direct Edtion, which comes with a special magazine showcasing all the main characters, a badge featuring the Dreamcast Princess, and finally a gorgeous scroll of Dreamcast-Tan. It's a lovely little set, and if you like the idea of the game enough, you can buy an accessories set, which includes a gorgeous leather (I think) pouch which features a line-up of the character silhouettes. I have my eye on that!

So overall, this is a solid brawler with some great details and plenty of fan-favourite characters and stages to play with. It's available on both PS3 and Vita, but on either format it's a great title for anime and game fans.

As this is an anniversary release I have no idea if a sequel will ever be issued, so it's a safer bet than most that this is the definitive version of the title we're going to get.

9
Plenty of content to keep your inner (and outer) nerd happy, backed up by solid mechanics and lovely graphics.