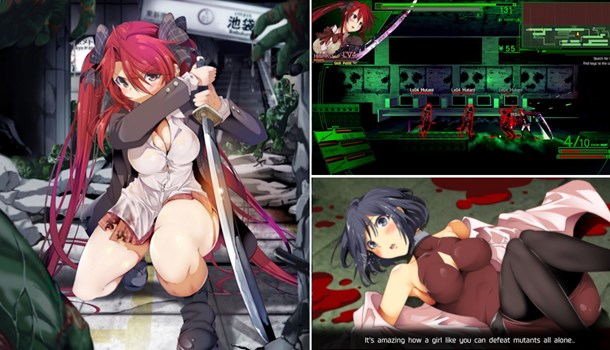 For 78 years, humankind (or, as the game calls us, "the mankind") has been driven underground by murderous mutants. Now, the grandchildren of those who survived that original lost war crave to return to the surface, and so Hisako dons her grandmothers school uniform and heads for the surface to experience the wonders of that long lost institution, the school. Along the way she'll meet new allies that grant her abilities to progress and weapons to fight with.

This Metroid-vania hack-n-slash was created by 3 developers at Studio Nanafushi, and was originally released on PC in Japan. Success at home led to ports for PS4 and Nintendo Switch, before Marvelous!, living up to their name, localised the game and released it in the West.

Common to the genre, you have a map to traverse with unlockable areas, secret paths and various tasks/quests highlighted for you to get to. Hisako is pretty lively, with a double-jump allowing her to easily bridge vast gaps, and three weapons at her disposal to call upon to thin out the enemy ranks.

The weapons consist of a melee weapon, gun and heavy artillery, all of which can be upgraded, augmented with unique skills, and be outfitted with two more buffers to make killing a lot easier. Its a pretty addictive mechanic, with a lottery-style system running the augmentation process - some upgrades will be minor stat increases, but others can add drones to your arsenal, which are incredibly helpful when the screen is full of enemies.

Weapons have limited durability however, and over-use can see them destroyed entirely. A good deal of item-management is required at the scattered save-points if you're going to make smooth progress in the field.

The graphics during play are 2D sprites on 3D rendered backgrounds, and move smoothly enough. They're nothing particularly special in all honesty, and a little more work could have made the game a lot more attractive, but regardless the game is never less than functional. A smaller screen can make things difficult, especially when aiming weapons and avoiding incoming enemy fire, but I made it through on the Switch's handheld screen with only a few annoyances to mar my enjoyment.

Hisako's moveset allows her dodge too, and a perfectly executed roll will slow down time and allow you to chain together huge combos, levelling you up and granting you more skill points to spend on the branching trees for each of your weapon styles. It adds a nice bit of depth to the game, and grants a feeling of control over you character that makes your relationship with Hisako a lot more personal.

The common enemies do become repetitive quickly, each unique type having multiple variations (fire-breathers, grenade throwers etc) but the bosses pack a solid challenge and will really put your weapon-management and acquired skills to the test.

You work your way around Tokyo's major train stations, starting in Shibuya and moving to new areas as you pave the way for the trains connecting the stations to run. There are some solid puzzles and fetch quests to undertake, but the side-missions will reap the most rewards and prolong the experience for those wanting to get the most from the game.

The incidental screens and cut-scenes are a mixed bag - character designs are great, and the stills representing them are lovely. When the 2D animation kicks in it's basic but attractive to look at. Where the 3D animation is in play, well that's a little on the ropey side - I wish they'd stuck with 2D all the way to be honest, as it is, the overall experience feels a bit disjointed.

The addictive nature of finding items and refugees, coupled with the depth of the weapons management and attractive character designs should provide most fans of the genre with plenty to get their teeth into. True, it's not always the prettiest of games, but where it counts, the game has plenty of slick action to keep you moving through the story to bring the mankind back to its rightful place in the sun.

7
Plenty of depth to keep you occupied as you tear through some repetitive enemies, but the game has charm and some intense boss battles. There are better examples of the genre, but there's lots here to enjoy.