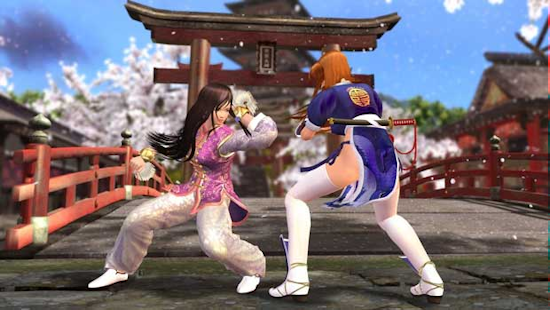 3DS fever seems somewhat tepid at the moment, with only a trickle of releases since launch, and for hardcore gamers, the system has been somewhat lacking.

Thank goodness then for Dead or Alive Dimensions.

What's on the menu?

Featuring 25 characters, 10 game modes, collectibles, active stages and unlock-able characters, it's quite an oddity that a fighting game should prove to be one of the system's most feature-rich titles, though perhaps less so when you consider that the other is Street Fighter...

And since DoA's only competition has been mentioned, lets get the obvious stuff out of the way first;

No, DoAD is not as complex or in-depth as Capcom's brawler, and button-mashing will certainly see you get further through the game, but there is a decent combat mechanic to work with here, and the simplified controls (one button for kick, punch, block and throw respectively) actually works in the game's favour. SFIV suffers massively on 3DS due to the God-awful control layout and imprecise analogue input, but DoA feels far tighter and more intuitive. It may seem odd to praise a game for simple controls, but given the platform's limitations it becomes a real benefit.

Visually, the game is lovely. The character models are smooth and attractive, special effects are suitably punchy and there's a feeling of weight to each character. The in-game cinematics do suffer from some horrendous artifacts in darker scenes, and the lack of animation on the character model mouths in some (but not all) of the animation makes it feel half-finished in places, but as these only occur in the story mode and are peripheral to the core game, they're not too distracting.

One of the key selling points is the multi-layered stages which allow you to batter your opponent into new areas - throw them down stairs, off bridges or even ship decks, and you'll land in another area where the fight can be picked up. It's a lovely spectacle and gives the game a solid sense of identity. Also neat is the ability to use the 3DS gyroscope to look around the stages on the title or level select screens. A small touch, but beautifully executed.

While I'm on the subject, the 3D is well implemented, providing some nice depth to the character models, especially the hair.

The characters themselves are varied and lovingly rendered. There are multiple outfits available for each character, and as you unlock figures you can even create your own dioramas in Showcase mode and take 3D pictures.

The game has a bunch of game modes, including story (Chronicle), Arcade, Survival, Free Play, Training and multi-player modes covering both online and local match-ups.

Of these, only Chronicles is a letdown, with a bizarre storyline (with liner-notes!) and the aforementioned cinematics, which is a major pain as you have to go through it to unlock a load of content, including playable characters. Personally I don't mind working for my content, but given the immediacy of SFIV's offering, it could make DoA seem lacking at first glance.

Spotpass will alert you to new outfits and characters, which is certainly an intriguing prospect. 28 outfits have been announced for distribution, with the Japanese launch recieving an exclusive launch day only costume (very clever!). No details have been revealed for any UK launch day DLC, but we've asked Tecmo Koei and hope to clarify this soon.

UPDATE - all the details are now in this news post, with pictures!

So DoA provides a delicious entry for beat-em-up fans, with its heady coctail of depth, simplicity and fanservice bringing some much needed quality entertainment to Nintendo's new handheld. The game has it's flaws and may be a little too simple for purists, but nothing gets in the way of an otherwise excellent fighting experience.