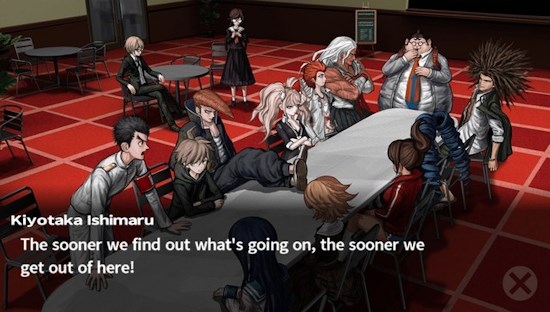 So here we have another very Japanese game that has inexplicably found its way over to western shores. Of all the unlikely titles to get a western release, and a superbly made release at that, I'm glad that Dangan Ronpa got to be the one. A high school murder mystery with trials held as one student kills another to escape the school they are held captive in, this is not a light-hearted game for kids - this is a real gamers game, squarely aimed at the fans of anime and Japanese pop culture. So, perfect for us then!

Fans of visual novels may have heard of this title already as it was released on the PSP in Japan a little over three years ago. Since that time there has been a very good manga, light novel and an anime adaptation in Japan, ensuring quite a notable fandom for this title despite this being its initial western release.

Before we start the review, I must say that if you have been, or have considered, reading the Dangan Ronpa manga or watching the anime at all... stop! The anime very quickly spoils the events of the game - yes, it's great, and the game plays well fine with prior knowledge of the events of the anime, but the experience of playing this game through the first time, solving the cases properly without knowing who commited which murder will certainly add to the game's challenge and make the story much more compelling.

So, the game itself. If you are looking for a game you can really sink your teeth into, Dangan Ronpa has a lot of content. It is most definitely for the type of gamer who values story highly. The translation quality will set the standard of games to follow it and NIS America have pulled out all the stops in making sure it is perfect. Visual novels are notorious for being very hard to adapt due to the sheer amount of text involved, making this all the more impressive. My favourite part though? The dual language option, something I bitterly missed from one of my PS Vita favourites, Persona 4 Golden.

Speaking of language options, unless you don't like the sound of Japanese, avoid the English Language option. The voice acting in the English option is just not to the same standard of the Japanese audio, and can be quite irritating. That may just be down to the way that American voice actors speak in anime roles, but I only dipped into it quickly to see what it was like. If you are a subtitled anime fan, you will more than likely never even try the English option, but if you are the type to watch dubbed anime then maybe you'll appreciate the voices a little more. Either way, for such a Japanese style game I think that the Japanese voice acting really lends itself to the atmosphere and the characters in the game.

Starting the game initially, the amount of characters is bewildering, and I had to check a few times to see who was who, but very quickly the characters build up their personalities and become pretty memorable across the board. It would be fair to say that every anime character achetype is represented in some way by one character or another, the specifics of which I wouldn't wish to spoil here, but I found myself getting very attached to some characters and relating to one that I wish I hadn't!

The gameplay is fairly standard visual novel fare - split into chapters with a fantastic art style and beautifully drawn, crisply cut scenes for events, and navigation of the high school setting actually carried out in first person mode in real-time. You get the choice of which characters to spend free time with in order to gain abilities that you will later have the option of using in the class trial... which is where the style of the game changes dramatically.

The class trial is a timed showdown of presenting evidence, refuting arguments and presenting your case against the student who you think commited the murder of the victim. At points during the trial you will be made to argue in rhythm, making the game very much like a fast paced, more intense Phoenix Wright: Ace Attorney game. The clues you have gathered are referred to as truth bullets, which you use to metaphorically "shoot down" the arguments of your fellow classmates. The trials are finished up with a comic book style re-enactment of the murder, proving the guilt of the perpetrator. Finally comes the execution of the perpetrator in a suitably ironic fashion.

The story itself pans out as a very emotional tale, as the nearly all of the characters involved are actually very endearing, with even the less traditionally likable ones having their charm points and even the evil antagonistic bear becoming quite likable in his own horrible way! The theme of the game will be well appreciated by many anime fans, and it really feels like a product of the Japanese anime and film industry. The teenager on teenager killing evokes a sense of Battle Royale, especially with them being forced to kill each other, though in its own way it's possibly even cleverer than Battle Royale was. These kind of mature themes may not sit well with every gamer, though it is certainly far enough away from reality that it wouldn't be considered gratuitous by anyone's standards.

The best thing about Dangan Ronpa for me isn't just the game itself, but what it shows that publishers are willing to bring to the western market. As long as there are willing consumers for this style of game, there are people who can and will make it happen. For those of us who grew up looking on at the amazing titles which never left the Japanese market, this is a very encouraging sign.

9
If you are a fan of anime, manga and Japanese games, this is possibly the game you've been waiting forever for without even knowing it.