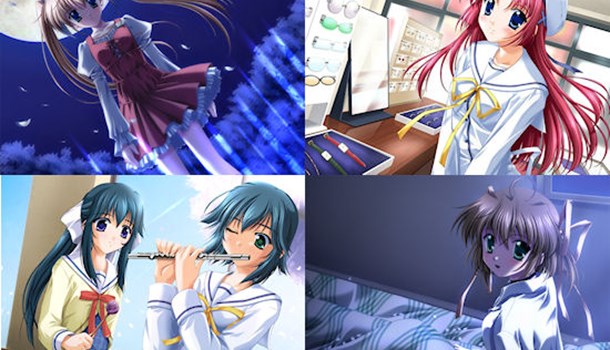 In something of a change from normal visual novel traditions, Junichi Asakura isn't your typical protagonist.  Well, okay, he is your typical visual novel protagonist in many ways, quickly proving himself to be a rather lazy and apathetic individual with a line in quick wit and sleeping in as late as humanly possible.  However, on the flip side of that coin Asakura does have a couple of rather unique abilities to his name - firstly, the ability to see the dreams of others, and secondly the arguably less useful skill of creating snacks out of thin air.

It's these abilities, and more broadly the slightly magic-infused setting which pervades Da Capo's island location, that serves to push this English translation of Circus' visual novel forward, centring (of course) around Junichi himself while presenting him a handful of girls to pursue via the time-honoured tradition of selecting from multiple choices on numerous occasions as the story progresses.  These girls range from Asakura's adopted sister Nemu through to childhood friend with a twist Sakura as the major characters in the game's arsenal, as well as a selection of supporting characters to pique your interest.

Where Da Capo adds a little more frisson to its multiple choice gameplay method is in the sheer number of choices available.  Rather than simply throwing up the occasional "how should I respond to this question?" choice, Da Capo splits its protagonist's days into several chunks - the day begins with Junichi's alarm clock going off at a time of your choice (from three selections), so that you can be an early bird or lazy slob at your choosing, and most days also allow you to choose where you want to go, whether it's choosing a place to spend your lunch break on a school day or where to hang out at the weekend.  At one point the game even takes this to a playful extreme by presenting you with a multiple choice exam paper that will most likely have you scrambling to search Wikipedia if you actually want to take this frivolous addition seriously.  With these mechanics in place, it's your job to guide Junichi through an important part of his life, through graduation from one school through to the beginning of another and beyond, although of course all of this is somewhat secondary to setting your sights on the girl of your choice.

It might seem a little odd to say this about a visual novel, and perhaps it's more evidential of my own indecisiveness or desperation to please everybody all of the time, but from my experiences playing Da Capo is hard.  I played through the game in its entirety twice without any outside help, and each time I found myself faced with one of its "wishy-washy" endings, hanging out with a male friend or just enjoying some kind of innocent friendship rather than establishing any sort of life-long romance with someone.  Although choosing which girl you want to "target" seems simple enough, as it soon becomes clear where they tend to hang out most of the time, the game also seems to throw enough curveballs to make pushing towards one particular route pretty difficult, which could well leave you reaching for a walk-through for the game if my experience is anything to go by.

Once you do find yourself inserted into the groove of a particular character's "route", Da Capo's experience is a pretty typical one for visual novels, with a blend of humour (some if it nicely realised) romance, drama and the occasional sex scene as whichever arc you're experiencing rolls on to some kind of grand finale.  As a lot of this drama revolves around the "magical" and otherwise supernatural elements of the story in some shape or form, it often feels a little contrived and forced where a very similar story could have been told in a far more realistic way.  Of course, your mileage will vary dependant upon your own interests, but for this reviewer there was little real impact to any of the major story routes from an emotional perspective, leaving you with a bit of a "seen it all before" feeling.

Visually, Da Capo's artwork can be wonderful on some occasions but frustratingly lacklustre on others, with an inconsistency which is a little jarring in itself - most of the CG scenes look great though, and there's no denying that the game's character designs are gorgeous, so that alone may be enough to tempt you to part with your hard-earned cash.

In general then, Da Capo is a big of a mixed bag - its narrative is nowhere near as compelling as some of the other visual novels we've experienced, and its artwork is occasionally a little flimsy in places.  On the other hand, the number of choices on offer, and the length of most of the game's major routes, mean that there's a huge amount of time that die-hards can look to sink into the game before it's been played to completion (and finishing all of the major story arcs unlocks a couple of additional routes).

We can't deny that Da Capo is a popular game, hence the production of sequels, spin-offs and adaptations as part of its franchise, but for us it doesn't manage to find itself a place in the higher echelons of the growing English translated visual novel market.  It isn't a bad game, and it has its moments, but there isn't really enough on show to make it a must-play game in our books.

Da Capo is an 18+ title, and is available to purchase as a digital download from MangaGamer

5
There's a lot of gamplay on offer and the odd nicely realised moment, but there simply isn't enough on show to make Da Capo's narrative stand out.
LATEST REVIEWS
13 Sentinels: Aegis Rim (Switch)