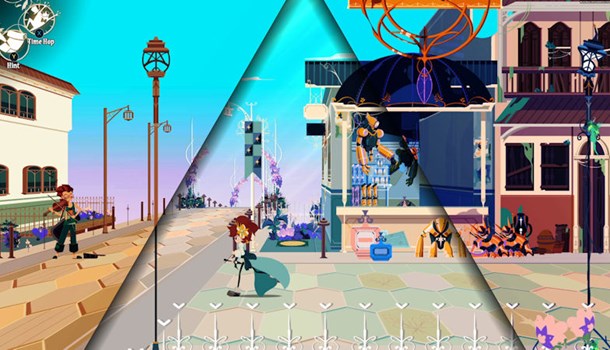 CrisTales introduces us to Crisbell, a young girl who lives at an orphanage, happily living out her life until a chance encounter with a talking frog leads her to discover that she has the powers of a time mage! Her magical abilities grant her control of the past and future through various means. After using her power to peer into the future, she understands how to use her actions in the present to influence events through the timeline, and with the help of her newly encountered allies makes a journey to gain more power in order to stop the machinations of the evil Time Empress.

As far RPG set-ups go, CrisTales has a rather standard storyline, with a seemingly average person has a call to action and realises they are part of a much greater destiny. It's your standard heroes journey that many RPGs use as the basis of their introductions, and here it feels like a deliberate (and welcome) hit of nostalgia. Along with many design decisions and influences the game itself feels like it is paying homage to various RPG tropes; you have the likes of dungeon crawling, corrupt politicians, young kids having to sort out problems and so forth. The game is also a standard turn-based RPG on it's surface, with each party member fulfilling a specific role in combat. Having access to various skills and fighting enemies, with a timeline appearing to show who's up next.

However there is one key aspect of the game that gives the game a rather unique spin on things. The time control aspect. On the field the screen is split into three segments with the present being in the middle, past on the left and future on the right. Your character moves in the present but can see things in all three time lines at once. This leads the way into certain side quests revolving around jumping into a time line. Interacting with a person in the past can help you learn about them in future and items from other time lines can be brought forward. Its a rather clever mechanic.

Where this game really shines however is in the battles. The game is a standard turn based RPG on its surface. However Crisbell has access to time magic. The battles have the main party in the centre, flanked by enemies on both sides. The ones on the left can be sent back into the past and those on the right can be sent into the future. Also both sets can be brought back to the present. Alongside this, each enemy has three designs, each based on where they are in their timeline. A past version which is usually their weakest version, a present version and a stronger future version.

Whatever happens in the past affects the future. The first example the player is given of this is casting poison on an enemy. When they are poisoned in the present and sent to the future, they will be hit with all the damage the poison would have done at once. Also one character has access to seeds and going from an earlier time line to a later one causes them to bloom with the effect hitting all enemies on that side of the screen. As things progress, more skills are learned that allow for interesting dynamics. The game also features a parry system to block certain attacks so timing is key. With so much going on in battles and so many mechanics at play, you'll need to concentrate and stay alert in order to advance.

Usually in JRPGs I tend to grind a bit and mash on attack, but here there’s so much going on that I had to remain engaged in every battle. This makes the battles fun in short bursts and really exciting during the boss encounters, but a bit of a hassle when in a dungeon and playing for long stretches.

The game has a hand-drawn anime aesthetic with a lot of cute character designs that are colourful and detailed. The music is also fun, and downright bombastic at times. Coupled with solid voice acting the game has plenty of atmosphere and immersion.

As mentioned previously the game likes to pay homage to old RPG tropes and this is evident in its side quests. These involve talking to multiple characters, travelling between areas and a lot of backtracking, but again these seem baked in to the design decisions. There's a nice warning when leaving an area that any side-quests left incomplete will not be accessible in the future, which is a nice touch if you're a completist. It would be easy to miss some sections given how intriguing the story is.

Overall CrisTales is a rather ambitious and interesting RPG from an innovative indie developer. It pays homage to classic RPGs, but with the aforementioned time control mechanic, creates a unique place in the market for itself. Both cute and charming, it's an inventive game which should appeal to fans of traditional RPG's and anime-inspired aesthetics.

8
A fun and charming RPG with an interesting time mechanic