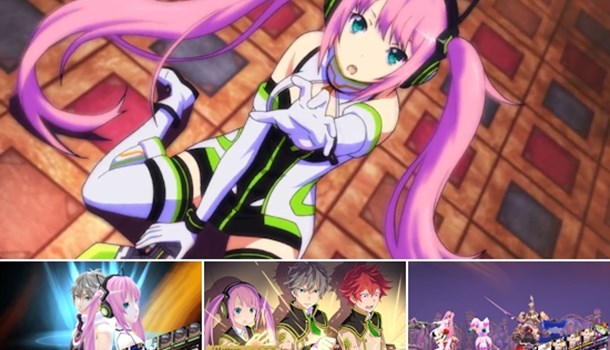 Conception II takes place in a future where portals to another dimension known as Dusk Circles have appeared throughout the land. Within each circle lurks a master-creature which spawns demons, which are then sent to attack humanity.

Unable to enter the circles, we can only fight the creatures to a standstill using Disciples, teenagers blessed with a mark that grants them superhuman fighting abilities. Even so, unable to attack the source, we are helpless to do anything except wait for the next onslaught. Until now.

Enter you, God's Gift, a young man capable of fighting within the circles. Now, with the ability to attack those spawning the creatures, mankind has a chance to win the war by destroying the source of this evil menace... and to do that, you're going to have to procreate with a lot of cute high school girls.

I can only imagine the meeting that led to this game getting the green light - it must have been hilarious. Conception II is is, in many ways, much like Persona. It mixes dungeon crawling with elements of a dating sim, and uses your interactions in the real-world to affect how you battle your oponents. Where P4 has Personas to increase your effectiveness in battle, Conception II opts instead for "Star Children", creatures created by "Classmating" with the female students in your academy. To create the best Star Children, you need to get the girls to like you by chatting to them and, in some bizarre instances, utilising the touchscreen to reassuringly tap, touch or stroke them.

This is a game that's actually a lot of fun to play but very hard to justify to anyone outside of the fan circles that enjoy these games. The girls you'll be interacting with all fulfil very standard anime archetypes, and have the sort of overly-earnest, breast-comparing conversations that never happen in real-life. Likewise, supporting characters can't help but comment on how lovely the girls in the academy are - whether they're in charge of the lab, wandering around the academy or even the head of the church, there's rarely a conversation that isn't designed to highlight the fact that you should just help yourself to all the low-hanging loli that's just waiting to help you save humanity by creating children with you.

But, if you can look past the elements that will make hardened feminists spontaneously combust with pure fury, the game's mechanics are actually well thought out and well, fun.

The dungeons restrict you to one female classmate and three Star Children. These are split into two units on the battlefield (parents and children) and you can use this to your advantage to outflank your opponents. Each character, child or parent, is capable of learning new skills through battle, and your children can even combine into a powerful robot. Frankly, as a Transformers fan, that's a dream come true for me!

The graphics in-dungeon use 3D models, which on the whole are very well animated and look sharp. The creatures roaming around the dungeon are generic evil-looking smokey-things, which means you won't know what you're actually fighting until you engage and the battle environment pops up. While this may seem lazy, it doesn't really detract from the experience as much as one might imagine, and it's a trick used by countless other games anyway.

The Star Children you're tasked with creating and taking into battle have a varied skill set, and if you want to succeed, you will at least have to put aside your preference for character art and start dating the ladies that will produce the best offspring for your style of play. This slightly aryan style of tactical play will pay off handsomely in battle, though it's good to discern how you want to battle as early as possible in order to reduce the amount of grinding you'll need to do in order to level up each new party.

Each randomly-generated dungeon has a boss, the master-creature responsible for spawining lesser enemies, and your task in each Dusk Circle will be to take the sucker out. Like Persona 4, you can exit the dungeon at whatever level you're currently on before taking on the big-bad, so you can pop off and buy some supplies before getting into the main fight.

Alongside gorgeous character designs, smooth 3D environments and some nice background detail, the music is also better than average. Jaunty tunes and some lovely cut scenes are peppered throughout, and if you pick up the limited edition US version you'll get a soundtrack CD included for free (No word on the Europe version yet, though it is inbound).

Atlus has done a solid job translating the title. Voice acting is almost entirely as you'd expect (twee and earnerst), and the often humerous double-entendre laden script keeps things lively... and occasionally creepy. The publisher has also been quite generous with add-on content, with free additional missions and gear available to download online alongside paid-for content if you feel so inclined, extending the games longevity beyond the 30-40 hour mark.

The game is available on both the 3DS and Vita, although if you have a choice go for the Vita version. The 3DS conversion makes very little use of the dual-screen setup, and while the breast mechanics are amusing in 3D, the whole game just looks so much cleaner on Sony's portable powerhouse. The boob mechanics are still there on the Vita too (just a lot clearer), in case that's important to you...

Conception II is a solid little dungeon crawler. It has a uniquely Japanese flavour and as such is likely to be a niche title, but Atlus (along with NIS) appear to have found a formula that allows them to release games that, a few years ago, would likely never have seen the light of day in the West. If you're a fan of visual novels, dating sims or dungeon crawlers, rejoice - this is all three, and it's really rather nifty.

7
Enjoyable if a little embarrassing at times, Conception II is a fun dungeon-crawler and a genuine surprise release for the Western market.