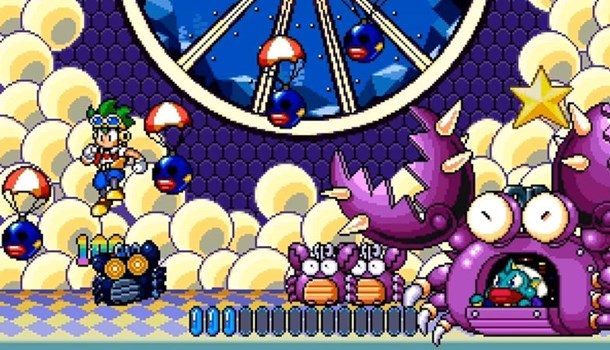 Rescued from the ashes of a failing arcade genre, in an age when 3D dominated the  cabinets, Clockwork Aquario is the final flourish of the year from Inin games. Originally intended for arcade release, the game was abandoned back in 1992 and has now been lovingly restored and completed by Ryuichi Nishizawa (you can read the story here).

Such a long journey has seen Clockwork Aquario dethrone Duke Nukem Forever from the Guinness Book of World Records for longest period of development for a video game. That makes this something of a unique release on the Switch - not another retro arcade classic you remember from your youth, but one you never even got to play. It's a game that shouldn't exist.

Firing up the game, it wears its arcade lineage on its sleeve, the anime-style protagonists cheerfully greeting you on the menu screen, all pink and green hair in a way that only 90's arcade games could get away with. It really makes me pine for the days when I was reading CVG, Mean Machines and Super Play...

You can pick one of three characters with which to undertake your platforming adventure, each beautifully animated and, in a charming little move, showing damage taken in tattered clothes. The stunning pixel artwork cannot be undersold on this title, it's absolutely gorgeous, with cute animations and pastel colours bringing the whole thing to life in a way only classic arcade games can. I've always been a major fan of pixel art, there are books on my shelves and retro consoles strewn around the office, and I have to say this seriously impressed to the point that I'll be buying the physical edition to grab the artbook. 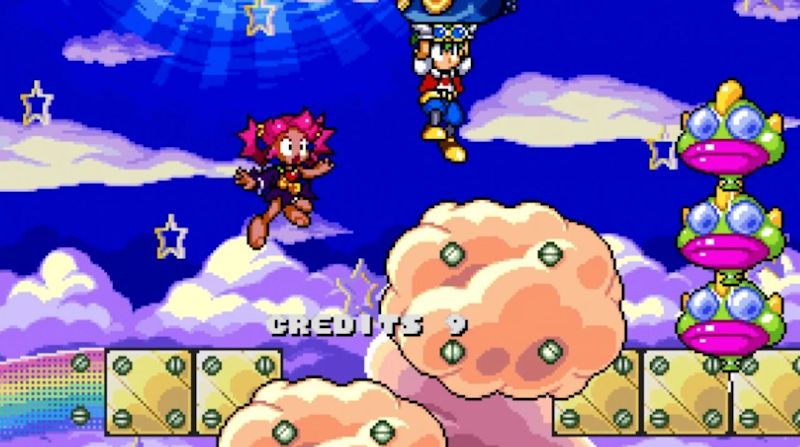 Damage is shown via tattered clothes - it's a lovely touch

Beyond the graphical fidelity, the game itself begins with a training mode or tiered difficulties (Arcade mode is locked). Hard, medium and easy difficulty is a simple matter of how many continues you are afforded, and the reason for this becomes clear when you beat the game, which takes less than 20 minutes. By today's standards that's quite the short ride, but it's made for hi-scores and in this area it's really quite addictive, helped in no small way by the charm the titles so effortlessly radiates. Limited continues draw out the challenge and remove the temptation to throw caution to the wind as you might with other arcade ports that allow retries.

The gameplay itself will see you taking on enemies by bouncing on them, bashing them from underneath or smacking them unconscious - one hit renders them immobile, the second makes them helpless, so that you can pick them up and throw them at other enemies, all instinctive platform tropes that work here. Each character operates a little differently, but the core mechanics remain the same. Should you have a friend who is inclined to retro adventure, they can join you as a second character and compete with you for points. You can use your mate as a way to reach higher platforms, or even have them throw you as a weapon, all great little flourishes that bring an extra layer of fun to proceedings.

Extras in-game include an art gallery, access to the music and even screens of the game in development with accompanying notes, all of which make it feel very friendly and open to the player. The letter of thanks from the staff is the cherry on the top of a very sweet package - knowing the developers share your arcade passion and appreciate you as a customer is, frankly, priceless.

The Arcade Mode will unlick those infinite continues, and for the seriously picky, access to a myriad of game modes, tests, display options and even DIP switches that control such items as whether or not sound plays as the game sits idle waiting for a player to feed it quarters. They're all nice features to mess with, and provide a level of intimacy with the software that seems exclusive to retro titles such as this.

9
A short and sweet arcade discovery that makes the past feel that little bit closer. A gem.