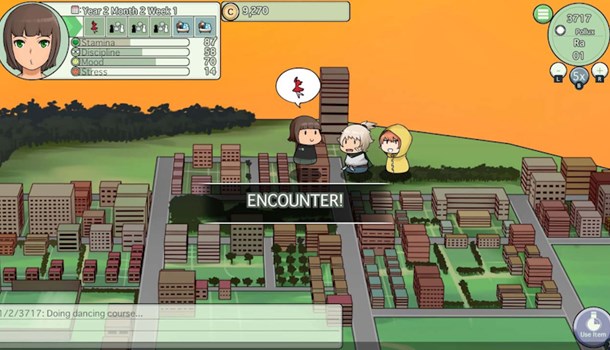 Set in a future where humanity lives on floating cities away from invading forces, as a resident of Ark-3, you are tasked with raising a survivor of the destruction of Ark-5, a young girl who you will raise over the following 10 years.

The idea of a daughter raising simulator immediately appealed, since I'm the father of a 4-month old baby girl, and the game may give me some excellent tips for raising her to fight alien invaders. Game on then!

Once you have named yourself, given yourself a suitable background (I chose fighter pilot) which comes with social and other bonuses/detriments, you're given the young girl who must be named. Imaginatively I stuck with Ciel.

The game is a sort of Tamagotchi balancing act - you're in charge of all aspects of Ciel's life, from feeding to daily activities, during which you'll need to watch her stress and stamina levels, ensure she's socially adjusted and keep her well fed. Go too far in any one direction and she'll get tired, stressed, ill or spoiled, so it's quite the gauntlet for any virtual parent.

Once you have worked out your week's plan, the overview changes to a city map in which a chibi-version of Ciel will float around, engaging in all the various activities you've planned for her. When something of interest happens, you'll be directed to a cut-scene where she'll converse with friends, teachers, or even be engaged in a puzzle battle.

The battles take place utilising sets of 3 colours from a diamond-shaped deck of cards, which can be refreshed one at a time or reshuffled to give you the matching colours required. It's not terribly challenging, but I get the feeling it's really more a mechanic to move things along than a serious attempt at a deep or engaging combat mechanic.

It becomes a lot more important when Ciel is sent to the surface to experience the dangers that lie in wait. She can take some of her friends, and the effectiveness of their support is tied directly into how friendly they are with Ciel. This monster-hunting excursion will increase Ciel's stats, and provide you with the occasional item if you're lucky.

Ciel Fledge is a game of numbers - it's a statisticians dream, as every single aspect will affect the resulting growth of your daughter, and from that point of view it's a fascinating insight into how planning vs circumstance can affect the outcome of any given project. I can absolutely see someone like Seb being absorbed in something like this, but for those craving more immediate adrenalin hits, the game is going to be pretty dull.

The very simplified artwork is a curious choice. In a game that sells immersion, the blank-eyed Stepford stares of the characters are a bit off-putting. Had they plumped for more inviting artwork (like the Atelier or Neptunia games), the title might have attracted a wider audience, but the simple nature of the presentation enforces the clinical nature of the gameplay, and therefore limits the appeal.

As a programmer, I actually found quite a lot to enjoy here, poking at the variables and watching the results come through. It's very much like testing code and reminded me of my early days at college running tests in Pascal and Cobol to see if input A did indeed render output B. If that sounds appealing, then this is a game for you. If it sounds like a nightmare, you'll find little to retain your interest.

Such a divisive game is hard to score, so reading the content of this review is essential if you're going to consider picking this up. For me, it rates a solid 7, as despite appealing to my logical nature, there are times that even I was getting frustrated at the shallow battle mechanics and threadbare story. For others this would rank a 3 for being dull and not doing more with the artistic style.

But since this is my review, I'll go with the 7, but be warned, this really isn't for everybody!

7
Strictly for the statisticians and logic enthusiasts, it's too shallow and niche for action fans.