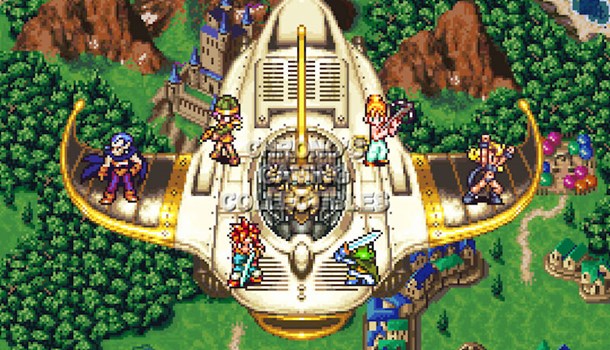 Square Enix have developed a habit of bringing some of their older franchises to a new generation of gamers. With Final Fantasy III and IV, Square even went as far as to redraw the entire game for the DS. So now it’s the turn of fondly remembered classic Chrono Trigger, but this time they've opted for a straight port of the original. After 15 years, is it still a classic game?

For anyone with fond memories of the SNES original, you're in for a treat as everything you remember is back, and even after such a long time, the game is a joy to play, with an engrossing storyline and great characters. In fact if you loved it the first time round, it’s fair to say that you’ll be enjoying it again after so many years.

So first things first, what's different between this version and the original? Well first up it features all the animated cutscenes that were present in the PlayStation port that never made it to the UK, so all of Akira Toriyama's character designs come to life thanks to Toei Animation. More DS specific enhancements come from a re-translated script to be closer to the original Japanese, a dual-screen mode so you can play the game without a HUD cluttering up the game screen, most notably the map-screen is constantly active - this makes things much easier.

Three major additions come in the form of a monster battle arena where the players can take on a variety of monsters from the game, followed by two additional dungeons. So for those that only played the SNES edition, there is more than enough content here to make it worth picking up again.

That’s all well and good for those of you who have played through the original game before, but what about those of us who never picked it up? Well thankfully I’m in that group and also in the same group that doesn’t get along with role-playing games (RPG's) too well anyway. I’m looking at you Infinite Undiscovery, Blue Dragon, Final Fantasy XII and Mass Effect. So the fact that I'm still playing Chrono Trigger after 5 hours speaks volumes for its pulling power!

The gameplay, especially the combat, was unique in its time, but has been used subsequently in titles such as Final Fantasy VII. A combat move can’t be executed until a time bar on the character has been filled, only then can the character either attack, use a tech attack (which is basically special attacks) or use an item. Characters can also do combine their attacks, which differ depending on who you pair up - this leads to some fantastic variety.

It’s not only the gameplay, but the presentation and the plot too. The game spans centuries, with the characters travelling around different time periods and actually effecting the future with their actions in the past. Your first mission in the game is bring back one of your party members by finding their ancestor and saving them. It may sound a bit "Star Trek" but the mixture of fantastic, interesting characters and character design work by Akira “Dragonball” Toriyama means that it all just works and gives it that extra bit of polish.

If there are a couple of things to be negative about, it would be the additional DS dungeons and lack of in-game sign-posting. It is very easy to read what needs to be done, forget and then have no way of finding out again what your next objective is. This obviously can’t be changed too much or you would be altering the game, but a little nudge in the right direction wouldn’t have hurt. Secondly the DS dungeons have split opinions, with some saying that they are repetitive while others say they integrate themselves well into the storyline. Since completing them isn't a requirement to finish the game, at least this addition is left to up to the player to decide to do or not.

Chrono Trigger is a game that has whole-heartily withstood the test of time and is still very much the classic it was back in the day. There is plenty for older players to get nostalgic about and easy and fun enough for newcomers to give the RPG genre a try. It’s a perfect all round package and shows that you don’t need fancy 3D graphics to be an awesome game.

9
A fantastic all-round package with some very minor niggles. It’s a must for any RPG fan.
LATEST REVIEWS
13 Sentinels: Aegis Rim (Switch)