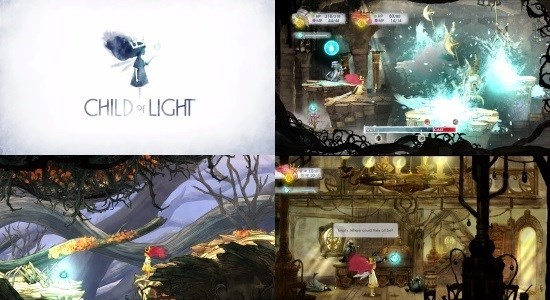 Child of Light takes the visual flair that's possible from the Ubisoft's so-called UbiArt engine and applies it to an RPG, the results of which make this game look like a fairy tale story book come to life. Aurora - the titular Child of Light and heroine of the game - is a princess who, upon losing a sudden onset battle with a fever, awakens in a mysterious dream-like world known as Lumeria. Aided by a firefly called Igniculus she wanders the strange world, picking up various companions as she goes along, in an effort to recover the world's Sun, Moon and Stars which have been stolen by the nefarious Black Queen. In doing so, Aurora hopes to reunite with her father, the Duke of Austria, and reawaken in the real world.

As you'd expect from an RPG, the story itself revolves around saving the world from an evil foe. While this set up is pretty standard, Child of Light conveys the story through a rather unique method of storytelling. Firstly, it really uses its beautiful visuals and music to great effect in order to convey the general tone and mood of the game along with world it has created. There is a sense of foreboding lingering in the air which aptly conveys the melancholic state of the world Aurora has been thrust into along with some fantastic character designs, allowing the game to really convey the dream-like world and fantasy elements that perfectly complement the game. Secondly, in order to tell the story the game treats its narrative as a poem, with all dialogue done in an alternate rhyming scheme.

The alternate rhyming scheme does convey the dream-like, story book nature of the game well enough and it blends together nicely with the visual aesthetic and dream like themes of the game. Unfortunately the novelty of this dialogue wears off rather quickly, making most of the dialogue in the game rather awkward. The game itself only has voiced dialogue in a few areas which are used for chapter introductions but has none of the characters talk, which may be a blessing in disguise as the dialogue, if spoken aloud, would be funny before immediately becoming cringe-worthy.

Now for the gameplay itself; Child of Light blends a side scrolling platformer with a turn-based RPG. The field sections of the game also involve puzzles which require the player to not only control Aurora but Igniculus the firefly also. This can be done using the right stick or turning on two-player mode and having someone else control the firefly. Taking a cue from Rayman there are flowers dotted around the scenery that, when bumped into, release small orbs of light known as “wishes” when collected. These restore Igniculus' energy, and following them in a sequence also releases orbs that restore HP and MP. Along with collecting these orbs, Igniculus is also used to solve the game's puzzles by shining light on various objects. Finally, Igniculus can be used to blind enemies, allowing the player to sneak past them or initiate a surprise attack to start a battle.

In battle, the game works as a turn-based RPG with both player characters and enemies waiting for turns and then waiting for the action they have taken to be executed. The game gives a time bar at the bottom of the screen that is divided into wait time and cast time. Once a character reaches the end of their wait time they can choose an action to execute - each action has a cast time that ranges from instant to very long. During the time it takes to execute this action a character can be interrupted by being attacked, forcing them back into the wait state. The aim of combat is for the player to execute actions without being interrupted by an enemy, and also to attack in a way that prevents an enemy from executing their action. This can be done using the interruption mechanic but also can be achieved by using various character skills, some of which speed up characters and can knock back enemies further down the timeline. Igniculus is also fully controllable in battles with the right stick - when he is over an enemy he can shine, which slows down their speed, or he can also shine over a player character to restore health. Like the field, there are also flowers dotted around the battle screen that have orbs to refill Igniculus' energy.

Although all this does make it sound like the game is rather complex, the battle system is actually really simple and easy to get the hang of. The game works with only two player characters in battle at a time (excluding Igniculus) and enemy teams have a maximum of three characters. There are also mechanics to make the game easier - included in this is Igniculus and the benefits he brings to battles, but there is the option to change out party members for those in the reserves, with every character getting the same amount of experience from each battle even if they didn't participate. The game itself doesn't pose too much of a challenge on its normal difficulty, but playing on hard does make things a bit tougher, thus accommodating both those who want a leisurely experience and those who want a challenge. Other than that the game is around ten hours long which, by RPG standards, is quite short, ensuring that it's compact enough to not overstay it's welcome, while the mechanics stay engaging throughout and the art is simply beautiful.

Grumblings about the rhyming dialogue aside, Child of Light is a very charming RPG that is perfect for those who want to play one but don't have the time to invest in more typical offerings from the genre otherwise.

8
Visually stunning presentation aids a great RPG for those with limited time and budget. It's a shame about the dialogue, though.