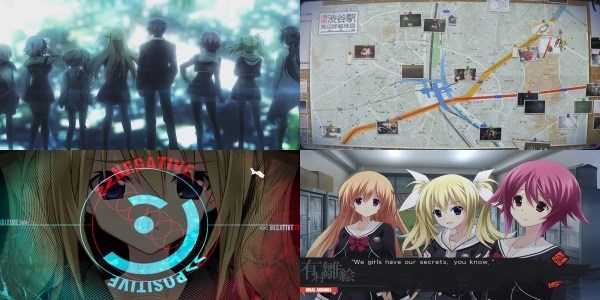 Set in 2015, six years after the events of Chaos;Head, Chaos;Child follows a group of high school students and survivors of an earthquake that levelled Shibuya. The player takes on the role of Takuru Miyashiro, the president of his school's newspaper club which is investigating a strange set of murders that parallel the New Generation Madness murders that took place six years prior(and were featured in Chaos;Head). Upon further investigation Takuru discovers a strange symbol at the crime scenes which leads him and the other members of the newspaper club to those with psychic powers.

Chaos;Child is visual novel dealing with supernatural, murder mystery and dark themes. Whilst being a direct sequel to Chaos;Head, I feel that it is not necessary to have read Chaos;Head previously to understand the story. There are a few call-backs and references here and there but the game does a good job of explaining them and the background to the universe. The game itself is your standard visual novel with branching paths and multiple endings. On the first play through the choices that are made don't affect how the story progresses or the ending that the player gets. Once the player has gone through the first route and attained that ending they can go back through the game in order to get the other endings which tie into specific characters in the game. This gives the player some freedom to try out the different choices presented on their first play through and see what transpires due to these choices. The choices the player makes happen sporadically during the game and take the form of delusions that Takuru has. These are known as triggers and by pressing L2/left stick to the left you get a positive choice. By pressing R2/Left stick to the right you get a negative choice.

These moments are hypothetical, and could lead to a quick scenes resulting in some comedic, sexual and somewhat disturbing moments based on what choice the player made. Some of these moments just come completely out of nowhere.

Thankfully by them being the thoughts/delusions of the main character rather than actual events, they serve as quick gags to break up the story rather than actual scenes that contribute to the plot. Within these delusions they make various references to pop culture, both Western and Japanese and even with names changed slightly, the references are so obvious it seems a bit unnecessary. At least to me. The best example of this is when the game parodies a movie franchise and its intro sequence so precisely that it’s hilarious that they don't say what this franchise is.

While these scenes could be really funny some of them verged into rather uncomfortable territory, with some rather dark moments of murder and sexualised scenes. As someone who is used to seeing such things depicted in anime, I'm used to it, but for those who tend not to watch anime and are wanting to play Chaos;Child for the story these moments can seem a bit strong. They do tend to occur in visual novels. The saving grace is that they are not fully animated, being a single CG artwork but these scenes tend to be depicted via a text description detailing what is happening and through character dialogue. The murder scenes in the game get really graphic at times with the methods depicted and images used, becoming rather disturbing. For those interested more in mystery rather than gore this may be something to consider.

As the story progresses, the plot becomes supernatural bordering on the fantastical and given that the story and characters take place in a high school setting, with most of the conversations revolving around crimes, photography and the internet, the dialogue uses a lot of references and jargon. Fortunately like Steins;Gate the game gives tips and a glossary. The game also makes use of scenes where the characters look at a map with photos in order to summarise the events that just transpired. This would be an interesting mechanic to make sure the player is paying attention. However the game does this quite a lot already with most chapters starting out with a recap scene. This makes the game feel rather dense with the amount of dialogue that is devoted to characters discussing the same set of events over and over again and it can be repetitive.

With that said, the story is rather gripping with some rather dark moments, twist and turns and there’s quite a lot of content to get through. The first play through alone for the main story route took me 25 to 30 hours to complete. At times it feels dense when having to read through events that just transpired but when things take dramatic and dark turns it really hits those notes.

There are a few problems. The game’s translation has a few glaring typographical errors in it. There were instances of words being stuck together and not properly spaced. From what I saw there were no issues where a word would start on one line and finish on the next, which has happened before. Overall though the errors weren't so bad that it made sections completely unreadable and the meaning in these scenes was preserved and understandable.

Overall whilst being a tad dense at times, Chaos;Child is an intriguing and intense supernatural murder mystery. Whilst some of the delusional scenes may put people off and the details of the murders are somewhat gruesome at times. Given the tone of the story overall these gruesome scenes work to highlight certain themes and aspects and can also be seen as a fun, depending on your outlook. Ultimately it makes Chaos;Child a fascinating Visual novel with a few caveats. For those who don't mind the length and who can adapt to the sudden comedic scenes within the dark storyline, they'll find a lot to like here.