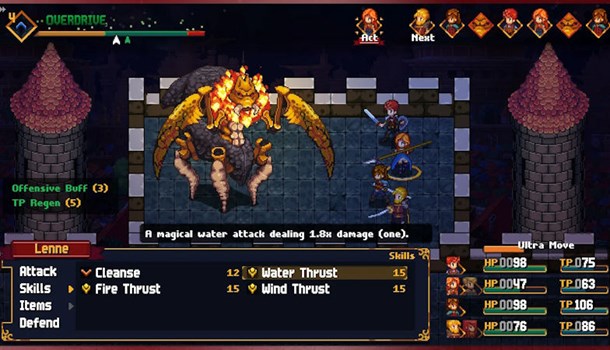 16-bit RPG's will always have a place in my heart - from Legend of Zelda and Final Fantsay to Secret of Mana, there's something incredibly endearing about that pixel-art of chibi fantasy characters exploring pastel-coloured surroundings and fighting monsters. So when Chained Echoes, which started life as a Kickstarter project by Matthias Linda in 2019, landed in the office, I dove straight in.

The game begins a few years before the main story, as two mercenaries create a calamity that forces a truce between three warring kingdoms. This does not sit well with malevolent forces in the background, whose schemes to undo this period of uneasy peace bring your party together.

Unlike say, Final Fantasy VII, you're not really driving a single protagonist, the team is the priority and you'll ultimately be caught up in their interactions and personal stories. Each of them is a delight in their own way, and the story is carefully crafted to make the most of each of them. In terms of story balance, Matthias has done a fine job in weaving everything together in a way that brings importance and gravitas to each of the characters you'll come to meet in the game, no mean feat and certainly a boon for this type of RPG.

The land you'll be exploring is rich in treasures, the act of exploring often rewarded with trinkets or additional fights that can level up the party. The map is open enough to feel free without allowing you to stray too far from the narrative path, with much of the landscape being graphically appealing and unique enough to remain enticing. You'll be egged along by a Reward Board that, much like the missions in a modern game like Horizon: Zero Dawn, don't require any particular order of completion, but remain tantalising enough to dip in and out of whenever you feel the urge. Unlike Horizon, there's a clever interface which chains achievements together, encouraging you to earn larger rewards by following a certain list. It's a smart but of design which subtly encourages you to make the most out of each new area. 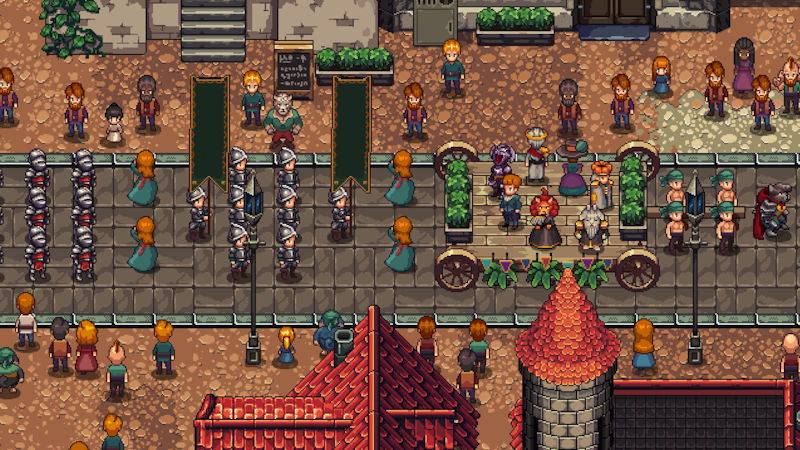 Towns feel well populated, which is a nice change for most RPG's.

JRPG's generally offer two types of combat - Zelda style hack and slash, or Final Fantasy style menus. Chained Echoes goes all in on the latter with a turn-based system that allows four characters to be utilised at one time, though a tag-team mechanic allows you to swap-in characters as needed. You'll have a number of meters to keep an eye on - the Ultra Move Meter fills up when taking and dishing out damage, and once full you can unleash one of your character's special skills, be it healing, buffing or a direct attack. The Overdrive Meter requires more care, as while it can move up to release party-wide positive effects, it can also overheat and cause chaos. To manage it, you need to use certain types of actions when indicated, and you'll cool it down somewhat.

This juggling of additional bars to manage your fights adds an extra layer of strategy and stops your party from becoming too over-powered at any one time, and this of course can be a bit of a sod when you want to do one action but your meters demand another to keep things in check. It's never too irritating but it does feel a bit like having a nagging back-seat driver at times. This is mitigated a little by getting the attack turn order at the top of the screen with quite a bit of advanced warning, which does allow you to at least prepare properly and understand who's going to do what and when. At the end of each battle all your stats are reset too, so you won't have to spend ages going through resources to heal and top up your TP stats.

Oh, and you get mecha later in the game too which changes things further, but that feels like spoiler territory so the least said the better, except to say that it's very neat and a nice twist on the gameplay once you become confident with everything on the screen. 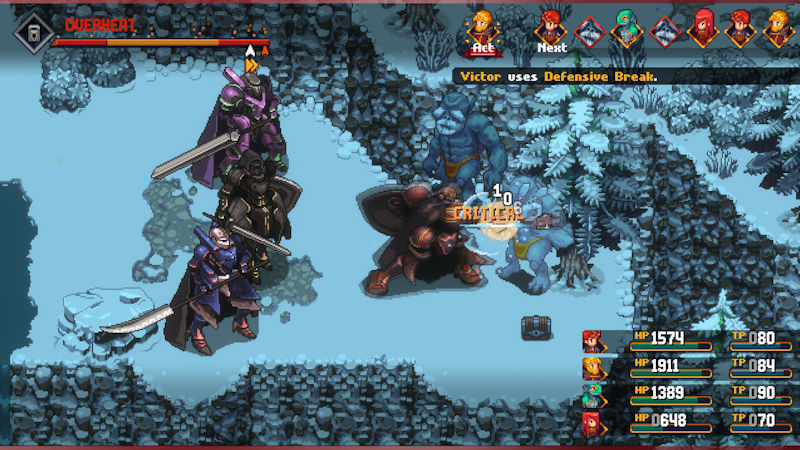 In terms of levelling up, the game uses Grimoire Stones, bestowed upon you after each boss fight, that allows you to buy new skills for your party members. There's no stat-based levelling, rather a tree of abilities you can unlock as you progress, unique to your character and their skillset. Sure, there's the usual health, defence and attack upgrades, but some are more nuanced and you can bring out the best in a character in unexpected ways if you're wily about your placement. These skills can be upgraded by earning SP in battle, some they'll acquire on their own, but you'll have a pocketful to distribute wherever you like to give a boost to each ability should you choose to do so.

Upgradeable gear also needs to be managed - each item increases certain stats, and gemstones can upgrade the item to further enhance it. The more powerful an item becomes, the more it can do, and you'll need to think about gem placement (these can also be fused together) to get the most out of your party.

For some, all of this stat-management and distribution of resources will be a headaches, but to the game's credit this never seems overly fussy or demanding, just a natural progression of the game.

Where it does fall a bit flat is in the visuals. I appreciate the retro style, but the colours and the design can come off as a bit drab, and to be charitable the portraits that accompany the text boxes are functional at best. It doesn't look as enticing as any of the SNES RPG's I've mentioned, and on looks alone the game is going to struggle. Similarly, the music by Eddie Marianukroh is perfectly adept at setting a scene, but there's nothing iconic or particularly memorable going on here.

Ultimately, it's the strength of the narrative and the admittedly gorgeous character art on the promotional material that's going to sell it, and the refined and intelligent gameplay that will see it leave a lasting impact. It's an excellent game through design, love and craft - a hard worker where it counts, superficial niceties be damned. I'd heartily recommend it on that basis, it really is one of the best retro RPG's I've seen in some time and probably one I'll come back to.

9
Okay, it's not the prettiest RPG, nor all that memorable audibly, but look beyond the surface and you'll find an enticing, beautifully crafted game that gives a lot back to the player. Highly recommended.