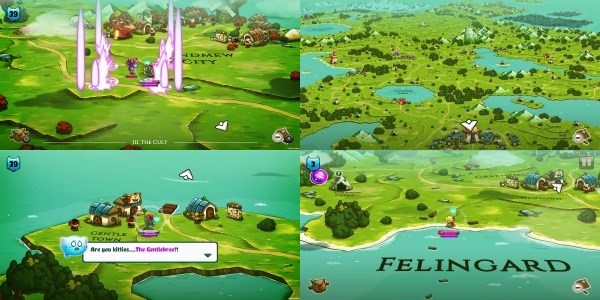 Starting with the familiar trope of having to rescue his kidnapped sister, Cat Quest puts you in the role of a silent Cat protagonist who happens to be of a certain bloodline that can kill dragons. In order to rescue your sister you must first slay the dragons inhabiting the world and become powerful enough to defeat Drakoth.

In order to gain experience and power, Cat Quest, as the name suggests, has you travelling the world completing quests as you go along. The game takes place on a giant over world filled with enemies, towns, caves and other various landmarks. The towns provide quest boards that allow the player to engage in side quests in order to gain experience points and money, and also acts as a place to rest to regain Health Points and save your game. The caves provide small dungeon areas and most quests within the dungeons require you to enter and defeat all the enemies within.

For the most part Cat Quest follows a very simple formulaic approach when it comes to its quests. Go to a certain area that an arrow indicator or dotted line trail is leading to, defeat the enemies in the area, head to the next area and repeat. Given this simplistic formula it can be inferred that this can become rather tedious, however, the tedium is prevented by having the combat in the game being rather fun.

The game is an action RPG that involves attacking with a melee weapon, dodging and using magic. The game has you constantly switching between these methods in battle constantly in order to defeat enemies. The way this works is that each enemy telegraphs their attacks by having an area of effect ring or mark appear on the ground filling or flashing in various ways to indicate when their attack will hit. It's then the player’s job to dodge out of the way and counter with your own attacks. The magic the player has works in similar fashion except there is no time lag between the initial cast and attack and no cool down like enemies have. Instead mana is used which is replenished from attacking enemies. With this battles have a bit of depth to them as the player is constantly on their toes dodging attacks and hitting back with the right attacks. The player levels up from defeating enemies and completing quests to gain experience points. Weapons are obtained by opening chests and as quest rewards. Weapons can be purchased but along with opening chests the piece of equipment you get is random. If the player receives a duplicate piece of equipment it upgrades that equipment’s level raising the level of various statuses. While it would have been preferable to have equipment be purchasable instead of given out randomly, the game makes up for this by having plenty of opportunities to hand out equipment that varies in order to complement each person's play style. Each piece of equipment can raise the players Health Points, Melee damage, Magic Damage or Armour. There are no health potions in this game with only a few of the magic attacks able to restore health and the towns providing this role. Making learning to dodge imperative to surviving the game.

The game itself has a really colourful and bright art style and with most of the characters being cats, the game also has a plethora of cat related puns within its dialogue. Some of these puns are just nyandeful whilst others will cause some paws for thought. You'll have the word cat thrown in anyway it can and other times you'll have the cat puns mixed in with some pop culture references. The most egregious example of this was a very badly timed reference to House of Cards and Kevin Spacey of all things. Speaking of which things aren't all as happy and carefree as they appear. With the quests most lead to very bizarre and dark stories, some of which involve cats being possessed, demons and spirits showing up to get revenge or get their hands on a relic that will free them. With this the story itself has moments that hint at deeper things but is somehow presented in a very familiar style that harks back to other RPGs.

With this simplistic approach to its game design and combat, Cat Quest manages to weave together a rather fun experience that can be easily picked up and played for a few minutes or hours given the players mood. This type game format really works well on the Nintendo Switch. The hand-held mode really makes the bright colours and art stand out and the quests are short enough to be played when the player only has about ten minutes or so. With that in mind the main quest of the game is also not very long. The main quest and game itself can be finished in about six to eight hours or so if you're going through the game at a brisk pace. Otherwise you'd be looking at around ten to twelve hours.

While Cat Quest is short, the pacing is spot on. There was never a dull moment playing it. The combat was fun and engaging and the story, whilst being simple, had some great writing. For example, just look at how often they could put a cat pun into the dialogue.

If you're looking for a light action RPG you can play on your commute in hand-held mode; Cat Quest scratches that itch and you will be clawing for more.