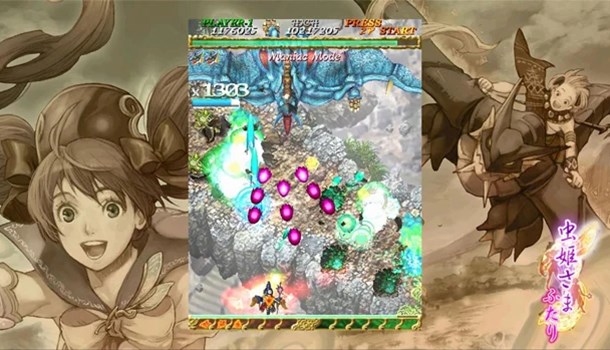 Fans of hardcore shmups will need no introduction to CAVE. As purveyors of some of the most beautifully balanced shooting action available, they've been setting the benchmark for the genre on iOS too, with DoDonPachi, Espgaluda 2 and Deathsmiles to name but a few.

With Bug Princess 2, CAVE once again provides a seamless arcade thrill for your i-device.

The game presents you with a choice - fly with the noble Reco and her bug-steed, or as gallant Palm on his dragon Hirow. I have to say I prefer to take the role of Reco since she makes the cutest noises ever when collecting a power up! Beyond cute noises, the other major difference is that Reco fires in a spread pattern, while Palm uses a tri-pattern style

With either rider, you get to choose between normal (2 driones fly and fire either side of you) or abnormal, where they abandon you.

Once in the game proper, you have two firing modes that you can switch on the fly - "spread" and "laser", with the latter being more focussed and subsequently of most use during boss encounters. You also have some bombs available should the action get too hot for you.

In terms of gameplay, this is a very addictive title. In common with all CAVE shooters, completion isn't the goal, it's racking up a high score. Once the bullet-hell gameplay has you in a zen-like state of picking a safe route through the enemy hordes, you'll have to find the best way to rack up bonus points, adding a thrilling second layer to the gameplay.

Imagination is allowed to run riot here too - the early stages see you fighting Dinosaurs and creepy crustaceans - your first boss encounter is with a T-Rex so huge he doesn't fit on the screen, and even after you deprive him of his face, his grinning skull will keep coming after you before you (quite rightly) send him to hell in a cloud of rainbow-coloured explosions.

The music harks back to the glory days the arcades, and while it's serviceable enough, I'd have a hard time humming it back to you.

The game also interacts with Game Centre and GamesFeint, which is important to those who like to show off their scores and wave their achievements under the noses of their friends.

Overall, this is another quality package from CAVE. Fans of the company can buy this with no fear of being let down - it's classic CAVE - lovely, lethal and addictive.

9
Beautifully calibrated for novices and experts alike, CAVE's games remain one of the best reasons for owning an iOS device