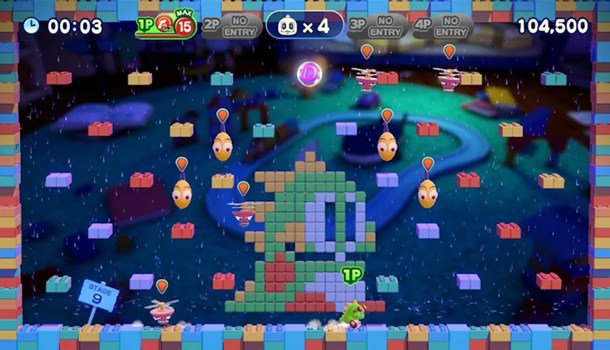 Bub and Bob are back, this time on the Nintendo Switch. I have to prefess something of a fondness for the venerable franchise, as it's been around almost as long as I've been gaming - released in 1986 by Taito, the game was originally designed to be played by couples. Series creator Fukio Mitsuji wanted to bring more women into arcades, so he made the protagonists cute and colourful. Seems to have worked as Bryony really enjoyed playing this one with me!

Happily the new Switch title includes the original arcade game, bringing things full circle. For those not in the know, Bubble Bobble requires you to traverse multiple screens, encasing your enemies in bubbles and then bursting them. It's a wonderfully simple game that's been given a bit of spit and polish to bring the game up to today's graphical standards, and even that original catchy tune has been remixed in this 4 Friends edition.

As an older player, I get plenty of value from the nostalgia hit of the original release, but that wouldn't justify the new modern day price tag. So what's been added?

The main focus of the game is now on 4 player simultaneous co-op play. This can be utilised locally, which makes it an ideal family game as we're all locked in together. The changes feel more incremental than revolutionary, with the same single-screen setting, but with more emphasis on platforming and stage hazards making life that bit more complicated. Enemies bounce around making them harder to defeat, and some of the little sods can fire ranged attacks as well, so there's definitely more strategy required to beat the game than in days of yore.

While playing, you can also collect letters to create the word EXTEND, which leads to bonuses. The game's difficulty curve makes this increasingly more problematic, but it never feels cheap or unfair. Should you fail enough, you'll find an option for invincibility presents itself, which might work well for younger players. Adults should tough it out and earn their bonuses!

4 Friends also adds power-ups into the mix. These can be equipped before stages start to give you an edge, and they're especially useful for those pesky boss battles.

Fun co-op games aren't that plentiful on the Switch (good ones anyway!) so having Bub and Bob back is a very welcome edition to the Switch's ever expanding catalogue. It would be easy to write the game off as an expensive remix edition were it not for the obvious love and care that's been invested into the game to make the most of the premise and add only what's necessary to improve the overall game. A little goes a long way in this regard, and in that sense, Bubble Bobble 4 Friends is up there with the best of the party games on the system.

With additional Free  DLC on the horizon, now would be a good time to get ahead of the curve and polish your skills!

8
Classic arcade fare remixed into one of the best 4 player co-op games on the Switch.