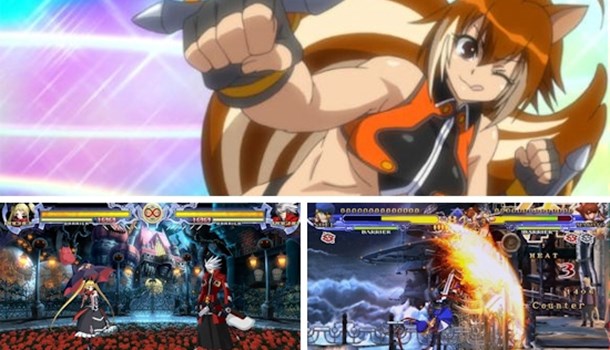 Blazblue is fast becoming one of the best arcade brawlers of recent years - the level of depth afforded by the technical playing style is on a level with Street Fighter III. The gorgeous character designs and graphics lend it a quirky charm that doesn't hurt either.

ARC System Works successfully ported the original to the PSP last year, and while the graphical fidelity and sound quality took a knock, the gameplay was as razor sharp as ever, making it arguably the best handheld fighting game conceived to date. Now it's back, with tweaked mechanics, new characters and even the DLC of its big brother console versions included in the line up, making this a sweet deal for brawlers on the move.

So far so good - the gameplay in the sequel is as strong as ever, and the core game is of a very high standard, but which version to get if you own both a PSP and Nintendo's rather troubled 3DS?

Firstly, popping the units side-by-side, it's instantly noticable that the 3DS version looks washed out. Where the PSP (and particularly 3000 and Go models) pop with vibrant colour, the 3DS simply doesn't look anywhere near as attractive. It's a major letdown when the 3DS is all about visual impact, but at least there's 3D to look forward to.

Another thing we noticed was that the text on the 3DS version looks badly resized - it's actually tricky to read in places, and we're starting to suspect that the original PSP graphics may have been shrunk to fit the lower resolution 3DS console.

Once we get into the game proper, the graphics are more or less identical - the sprites from last years PSP Blazblue have been recycled and tweaked, and then used as a base for the 3DS version too. As a result, the 3DS version is slightly less polished, but taken on its own the game looks perfectly ok on Nintendo's latest baby.

Having put the PSP away for now, we tried the game with 3D switched on - instantly the backgrounds, foreground and characters are seperated onto different planes, and there's definetely an "ooh" moment. Once the initial effect wears off, you do start to notice that seperate planes are really all you're getting. Everything is still strictly 2D in nature - the floor the characters are "stood" on lacks persepctive, so the whole thing looks like a cardboard puppet theatre. Menus and floaty text are all very nice though, so depending on how impressed you still are with 3D, the impact is quite nice here.

While the 3D itself doesn't effect the gameplay on 3DS, I did notice some slowdown, which is absolute murder in a fighting game as fluid and technical as Blazblue, and when you're trying to run combos (which I'll get to in a minute) then it really has a negative impact on the game. The effects are most notable when making airborne or dash attacks, and it gets old. Fast.

As if that weren't annoying enough, the 3DS controls just suck. The D-Pad can barely pull off diagonals and the spongy analog nub is disabled too, so certain moves are finger-twistingly hard to pull off - similar problems plagued Street Fighter IV on the 3DS, so while it was expected it's still frustrating. The 3DS just can't cope with fast, technical input, but we can't blame the game for Nintendo's bizarre technical failings.

If this is all starting to sound a bit anti-Nintendo, that really can't be helped. How a machine that's new to market can be so thoroughly embarassed by the same game running on 6 year old technology that's 25% cheaper and 100% more fun to play is simply mind-boggling.
The worst crime is that the first truly decent third-party title to hit the 3DS since launch is such a let-down. I'd be even more dismayed if someone tried the game on 3DS and then abandoned the franchise as a result. Play this game on any other machine and it's an utter joy. James and I played the PSP version plenty while travelling around Japan, so for the love of Noel, buy the PSP version if you want the game on the move before the Vita turns up and rocks our world with an HD version.

The final score below is for the PSP version, for no other reason than we'd hate for people to miss out on Blazblue for the sake of the only inferior version on the market.