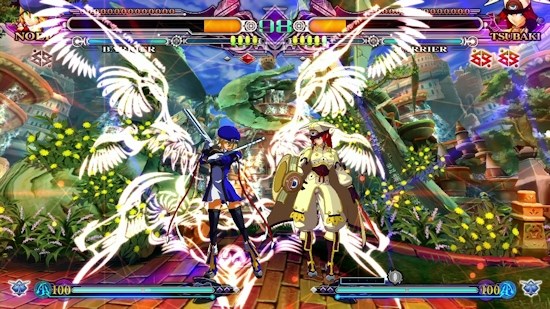 You should know the drill by now - Blazblue is a gorgeous anime-inspired 2D fighter that's easy to pick up but incredibly tough to master. It's tactical in the same way that Street Fighter III is tactical: learn the basics, then drill like a SAS recruit until you have even the most complex moves, combos and strategies emblazoned on your brain and then seek out other master players for a real challenge.

Blazblue is really becoming the most relentless fighting series to grace consoles since Street Fighter II's onslaught in the 90's. Every revision brings improvements that baffle some and delight the hardcore, and Extend is no different.

To elaborate, here's the changes in shorthand from the previous iteration:

Now, that last one is deceptively glib; you only have to ask our resident Blazblue fanatic James about how they've completely changed Noel's combo tree to understand how much the game has changed on a technical level. Strategies that would work in previous versions have been completely neutered now, making every character a "new character". Basic moves remain unchanged, but the technical aspect of each is a whole new ball game, and for those that love the techie stuff, this is huge.

The biggest draw of the latest Blazblue has to be the Vita version (though we tested the 360 version too). Where the home consoles benefit from the release as an incremental update - featuring a new character and revamped combo systems as above - this is the first time the series has landed in full HD glory on a portable format. And my word, it's breathtaking.

The HD visuals of Blazblue always set the standard for 2D fighters, but on a 5" OLED screen it's just stunning. Yes, the PSP version played a flawless game, and the graphical downgrade wasn't too much of an issue, but to see it like this just makes you realise how much those lush visuals enhance the experience.

It's smooth too, like Bond chatting up a girl in a bar, and it's riveting to watch. The Vita's controls cope admirably with the precise inputs often needed in a game like this. True, it'll never be as good as a solid arcade stick, but the D-Pad is precise, and even the analogue stick is nice and snappy. It really shows up the 3DS in this department, which is awful for fighting games due to its poorly conceived layout, the Vita just makes play effortless.

We also tested the Vita's ad hoc network play, and this works just as well as the PSP version. We didn't detect any lag, and the lobby system is as clean and simple as always.

The biggest problem with Blazblue is actually finding it. I've not seen a single copy on the high street, so check out the usual online haunts, or even Zen direct for their always-fun fans editions. Sure, you pay a premium but you do get some limited edition goodies unavailable elsewhere (2 manga in this case, along with the premium edition art cards and soundtrack).

The last distinction for Vita owners is that, to date, this is the only game on the system with a limited edition. Given the sparse nature of the physical releases (way to get us to go digital Sony) this is a very welcome change!

If you have the home console version of the previous game, this update is really only worth the investment if the mechanical changes will affect you - casual players may want to think twice, especially if they've already paid for the DLC. For Vita owners, this is an essential day 1 purchase, more so than Marvel vs Capcom, which may have more variety, but lacks the longevity of Arc's masterclass in pure pugilistic precision.

9
With changes that are more than skin deep, this remains a beautiful, elegant fighter for those who like some brain with their brawn.