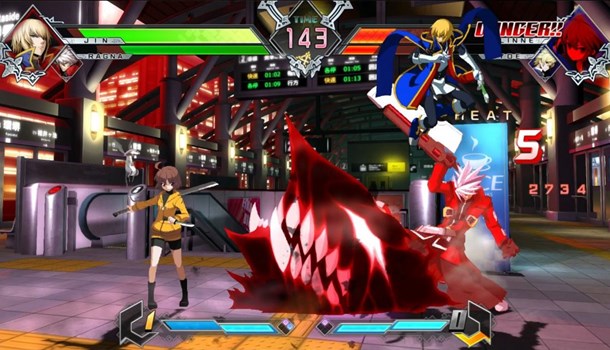 Combing four franchises together from three fighting games and one American made anime inspired cartoon. BlazBlue Cross Tag Battle sees characters from Blazblue, Persona 4 Arena, Under Night in Birth and RWBY battle against each other in tag team matches in a crossover fighting game that borrows elements from the three respective fighting games and simplifies them into a new system that fans of any series or newcomers can easily to grips with.

The game itself sees the player create a team of two characters. Each match is only one round that requires both characters to be knocked out in order to win. The player controls one character at a time, giving both their own health bars that can recover when they are on standby. The main focus of battles is for the player to learn how to properly utilise both characters; making use of swapping between them and using assists to help damage the opponent.

Attacks are done using Square and Triangle which the game notes as being inputs A and B respectively. Input C which was the heavy hit in BlazBlue is now the Cross attack. Hitting it will cause the player and their support character to do a special move together. With regards to attacks special moves are now done mainly by using a quarter circle forward or back motion with using the light and heavy attacks. Pressing input C with this will do a more damaging move that uses up one meter on the special gauge. These moves inflict a bit more damage and have extra properties. Special moves are performed in this one by doing a quarter circle forward or back and pressing B+C at the same time, which uses two gauges of the special meter. This makes things simpler but in turn limits characters to just two special moves. From this each character now has the same move set meaning that its pretty easy to jump between characters and experiment to see which one the player likes best.

With regards to the gameplay as mentioned previously the game uses a special meter than can fill up to five gauges normally and also there is an assist meter is tiered into two gauges that can determine if the support character can be called in for assist attacks. There is also a diamond counter that fills up as assists are used. This counter can be filled up to four times. The main use for this is to determine how many extra gauges the player gets when they use resonance blaze. Resonance blaze is a powered up state that can only be activated when the support character has been knocked out. The special gauge usually has a maximum of five but can be increased to nine when the counter is full. A maximum gauge of nine is needed to perform the astral heat command. Which BlazBlue veterans will know as the instant kill move that wins the match when it connects. There are no restrictions on opponent health this time which makes astrals act a bit more like the instant kill moves from Persona 4 Arena. Also Resonance Blaze lasts for fifteen seconds and constantly fills the gauge to the maximum that is allowed based on the assist diamonds filling. Whilst in resonance Blaze moves do more damage and special moves do. As well as this the player's health is constantly refilling making the usage of this mode a great help in order to win a match when they are at a disadvantage.

With regards to mode BlazBlue Cross Tag Battle feels a bit lacking. It has Episodes which is it's story mode, training, challenge, survival and it's online modes. Episodes is the story mode divided into a prologue and four main stories based on the franchise. Each one can be finished in an hour or two making them relatively short compared to the longer visual novel style stories of newer BlazBlue games and Persona 4 Arena. The good thing is that there is a decent amount of fights with each fight having a scene between them that lasts at most ten minutes or so. With the amount of fights and story scenes; Episodes feels like a mix between arcade mode and a story. With regards to the story only one of the four stories has branching paths and dialogue choices. This is the Blazblue one, which also contains the true ending to the game. I managed to achieve this after finishing all of stories and got to the ending through trial and error with dialogue options. The story itself without giving anything away is not that great for plot but more of a fun way to see your favourite characters from each franchise interact. There is a lot of referential humour such as having the worst cooks of each franchise work together to create a new dish or seeing characters from one franchise ask about concepts from another; example of this is seeing Ragna ask what a Persona is. These moments are made even better with the inclusion of an English dub. It is great to see the English cast of BlazBlue and Persona 4 back to voice their characters. Also the Under Night Characters are given English voices for the first time; which are great. What lets it down though are the RWBY voice actors, who sound terrible compared to everyone else. Their dialogue sounds really stilted as if they're just reading it off a page. They also tend to have weird inflections which makes their conversations sound really unnatural. The game combats this problem slightly by allowing Japanese and English voices to be set on a per character basis in battles. This is a great inclusion for fans who have experienced one of the franchises in one language and want to retain that. However this doesn't transfer over to after battle win quotes or episodes which goes by the overall system default setting. While the voices may not be great the RWBY characters are surprisingly fun characters to play as with great designs in the game that really fit in well with the rest of the cast.

With regards to the other modes; challenge mode feels a bit lacking as each character gets a standard challenge to introduce their moves and style and then six challenges that can be easily cleared. Compared to the other fighting games these characters come from this feels lacking. However this can seem to be directly related to how simple the game is as it makes use of auto combos by repeating A or B and comboing from A to B simple combos can be done which can easily be cancelled into specials. While challenge mode is lacking, the game has a great tutorial mode that explains the new mechanics of the game.(I highly recommend starting with this) Other than this the game makes use of a lobby style system for online matches with the player having an avatar character walk around. The game also has menus that can be used for matches. At the time of playing this I only managed a few online matches as the game was currently not out in Europe. A few lobby matches and player matches. The problem at the time was that there were hardly any matches to find. Each lobby can hold up to 64 players but the most I'd ever seen in one lobby was 16. Also player matches when done through room matchmaking would drop connection a few times, whether this was due to connection issues or rage quitting players remains to be seen. Out of all these matches though I could never get a ranked match. With the game now launching here in Europe hopefully more players in this region will be on the server.

The last point we need to discuss regarding the game is it's content strategy with regards to characters and DLC. The game starts with 20 characters. 10 from Blazblue, 4 from Persona 4 Arena, 4 from Under Night in Birth and 2 from RWBY. At the time of review the version played had just these characters and no DLC characters. The further characters will release as character packs for £3.69 each or get all three for £13.99 including all colour packs which will cost £2.49 each. Given that the game is being sold on sites for between £30 - £35 seeing these extra characters take the price to around £40-£50 depending on how you buy them and it works out the price you'd pay normally for the game if these characters were included. Whilst some may complain about how this has been handled it looks like they tried to adjust the price accordingly to remedy the situation.

Overall BlazBlue Cross Tag Battle may be lacking in modes, it may be light on story and may be simplified compared to other BlazBlue games but it's fun. The characters are great, the gameplay mechanics work really well and combining these all together creates a fighting game that both casual players and series veterans can enjoy.

PlayStation 4 Version Reviewed. Base version with no additional Characters

9
A simpler BlazBlue but really fun. One that will keep fans happy and is accessible enough to bring in newcomers